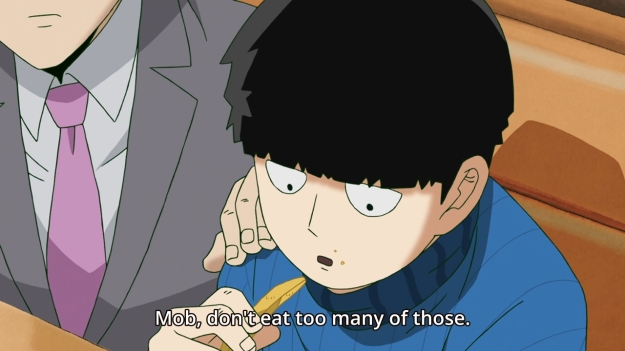 Business isn’t going so well for Arataka, so the dude drags Mob to a nearby city where urban legends are all the rage. They then bump into a chubby rival psychic and proceed to chase leads in separate directions. We know that most urban legends are made up, but if you keep digging, you’re bound to find something. As the saying goes, where there’s smoke, there’s fire. So that silly story about the dog with a human face? Turns out some jerkwad kids took a marker and drew on a poor pupper. How ’bout the scary old man in red? Just a pervert flasher with a hairy butt. Even if some urban legends aren’t true, it’s worth solving these problems anyway. But at the end of the day, we ultimately have nothing to fear, right? Urban legends aren’t really true, right? Well, this is Mob Psycho 100 we’re talking about. This is a universe full of individuals brimming with psychic potential, so of course some urban legends are true. In fact, they’re only true because we lend them credence with our beliefs.

The chubby psychic tries to apprehend the pervert but ends up running into the Dragger instead. Apparently, Japanese kids like to tell the story of a creepy lady who only appears on rainy days. If she sees you, she’ll drag you (hence the name) into a nearby lake and drown you. Well, the chubby psychic tries to exorcise the Dragger with Dimple’s help, but he soon discovers that his powers aren’t working. In fact, they’re being absorbed. She’s immune to him, and this is because he believes in her. More importantly, he has fear in his heart for her. The Dragger only exists because the city is full of people who believe in her existence. Anyways, her immunity would apply to Arataka if he actually had any psychic ability. But of course, Mob is the protagonist, so he has no problems defeating the Dragger. The explanation is simple: Mob is no fun. Even if an urban legend doesn’t scare him, he doesn’t play along. As a result, nobody even bothers to loop him in and tell him these stories. 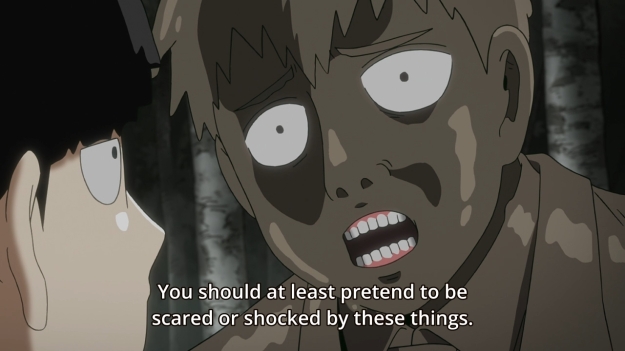 There’s really not much to say about the events in this week’s episode, since no real character or plot developments appear to have taken place. It’s just kind of a fun, silly episode. So I wanna go on a bit of a tangent. The whole urban legend thing here reminds me a bit of the rumor system in the Persona 2 duology. In those games, rumors can become true if enough people repeat them. So what you do is you take a rumor that’s beneficial to you and go find someone who can spread it. Y’know, people with influence in the city. Obviously, there are downsides to this, and we just saw some of those downsides. If people irrationally believe in something scary, then something scary will happen (e.g. the Dragger). It turns out that one of the bad guy in Persona 2 has been using cults to convince people that the apocalypse is nigh, and I guess this is his way of showing us that humanity desires its own destruction.

Japanese storytellers are really fascinated with the concept of humanity’s collective unconsciousness, huh? But they seem to take it even further. After all, they don’t just posit that we share a soul, but that this soul has the power to actualize its beliefs. Carl Jung’s fingerprints are all over the place. Serial Experiments Lain, the Xenosaga series, Code Geass… these are just stuff right off the top of my head. But if we’re talking strictly urban legends, they’ve kinda… I dunno, they’ve kinda gone off the deep end, haven’t they? When I was growing up, kids at school never talked about urban legends. The topic just never came up. I actually had to check out books about ghosts from the library in order to inject a bit of fear into my life. More importantly, I think classic western urban legends have more to do with serial killers. Like, y’know, the cops telling the babysitter that the phone call came from the same house. We now have creepypastas like the silly SCP stuff… but even then, I can’t help but feel as though urban legends are kinda dead. Or maybe I just need to sit around the campfire more often.