Reminder: I’m still waiting for this show to get really good, because I dare not take it lightly! Unfortunately, this is not the week that the anime gets really good. At moment, it’s still nothing more than an amusing diversion.

— Once again, we have a trio of mini-stories. In the first one, a confiscated teen magazine reveals that 34% of their peers have already lost their virginity. Yeah, that sounds about right. Despite his intelligence, however, Miyuki thinks that the number is inflated. What a silly guy…

— I can’t find any numbers regarding high school students, and by “can’t find,” I really mean “I took two minutes to Google this and then gave up.” But here’s the next best thing: according to this article, the number of female university students who have had sex is down to 36.7%. That’s kinda low, isn’t it?

— When it comes to anime, most characters are not only hardcore virgins, they’ve also never been kissed. Lips-to-lips, that is. There’s a reason that the whole “holding hands is lewd” thing is a meme. So of course, Miyuki and Chika haven’t had any experience. The same goes for Kaguya, but she shocks everyone when she claims that she had had her first time a long, long time ago: 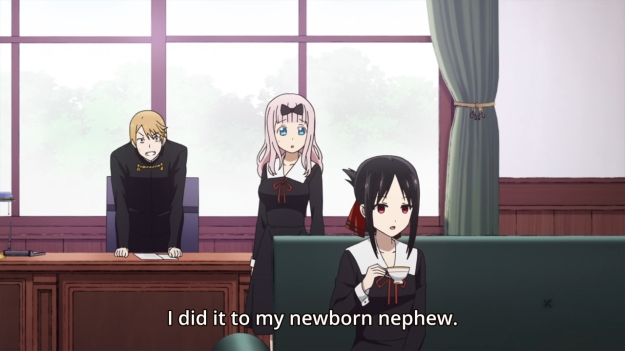 — But of course, Kaguya’s so sheltered that she thinks your first time is just kissing. So here’s the part that confuses me. Obviously, she got disgustingly terrible sex education. In fact, a lot of Japanese teens will say that their sex education is woeful. If you’re going to just leave it up to your other partner, that’s just a quick ticket to disappointment. I’m not saying that all men are selfish in bed. I’m just saying that it ain’t their body, so how would they automatically know what makes you feel good? But I digress. If Kaguya thought “doing it” was simply just a kiss, did she honestly think she had sex with her newborn nephew? Uhhhhhh…

— Plus, does she not have a computer? Has she never gotten curious and looked things up on the internet? As a teenager who has (on average) gone through puberty by now, has she not felt sexual urges when looking at or thinking about an attractive male? Oh right, right, this is just a silly comedy. Don’t think about it too hard. It’s not like it’s a really, really good show that I shouldn’t take lightly.

— In the end, Chika had to go and rob Kaguya of her innocence: 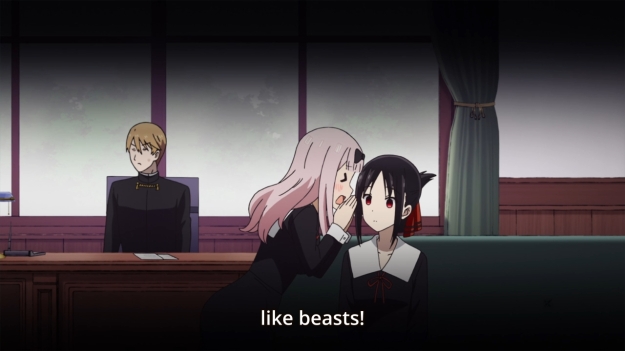 — Boom, time for the second mini-story!

— Kaguya and Miyuki are alone in the student council office, and the guy muses that he understands her a little better now. After all, they’ve been on the same time for half a year now. Anyone working that closely together would grow closer over time, right? Unfortunately, this is Kaguya-sama wa Kokurasetai, so every sweet moment turns into a competition. Well, it’s just a silly comedy at the moment. It might get good, but not yet!

— The girl quickly challenges the guy to a game of 20 Questions, but since he was so bold as to claim that he understood her, he only gets half the amount.

— With his seventh question, Miyuki asks Kaguya if it’s something she likes. She says yes and starts blushing. By the time he’s done with his ten questions (technically nine because he wasted one), he has strong suspicions that his name might be written on Kaguya’s small piece of paper. Perhaps this is her roundabout way of confessing to him!

— But alas, this is Kaguya-sama wa Kokurasetai, so we can’t have nice things. And by that, I mean that every story must end by hitting the reset button and thus maintaining the status quo. After all, these kids are too prideful to admit their feelings to each other. Kaguya wants Miyuki to guess his own name, but she wouldn’t dare go out on a limb and write his name down on the paper. Miyuki actually understands her too well, so he disappoints her by correctly guessing Pesu, Chika’s dog. Alas, he wins, but honestly, nobody really wins (especially romantic saps like me).

— If you wanna watch this show and have a good chuckle every now and then, you’ll succeed. It’s not bad. It’s kinda funny at times. But if you watch this show for actual romance, prepare to get blue-balled until the big crunch. Ooops, I shouldn’t underestimate this show. It’s gonna get good, you guys! It’s gonna get really, really good!

— Finally, we come to our last story. Kaguya normally gets driven to school, but today, there’s a cat refusing to leave the car’s engine. She thus seizes this opportunity to do what she’s never been able to do before: walk to school like a normal kid. And who knows? Maybe she’ll run into Miyuki. I don’t want to belabor the point, so let’s just get the boring nonsense out of the way: Kaguya eventually stumbles across a crying, little girl who can’t walk to school herself. Our heroine’s kind-hearted nature compels her to help the little girl. The end. No, really, there isn’t much to glean here other than that Kaguya is nice…? Not exactly top-notch characterization. Anyways, she does eventually run into Miyuki, who is always almost late to school, but thanks to his bike, he always just manages to escape trouble every single day. And gosh, he wouldn’t want Kaguya to be late either, because that would reflect poorly on the student council, so she better hop on and ride with him!

— She’s not even holding onto him!

“Kaguya, you better hold onto me.”

“Ara ara, isn’t that forward of you?”

“Yes, but I’d rather you not fall off and crack your skull open like an egg.”

All you had to do to up the romance and help alleviate the pain of my perpetual blue balls is to have her wrap her damn arms around his waist but we don’t even get that!

— Kaguya’s back to being driven to school every day, but she thinks back to that one day with Miyuki and smiles. OH FUCKING BOY