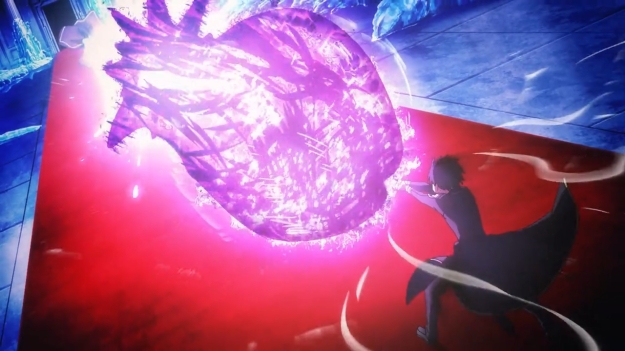 I’ve given up on trying to seriously blog this show, so let’s get this over with. As you can see from the screenshot above, Kirito’s black, hairy kamehameha is really impressive. 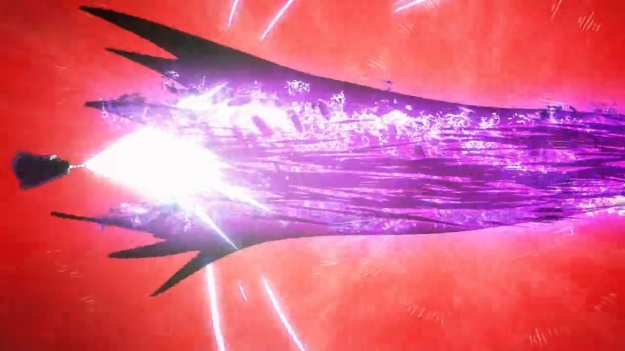 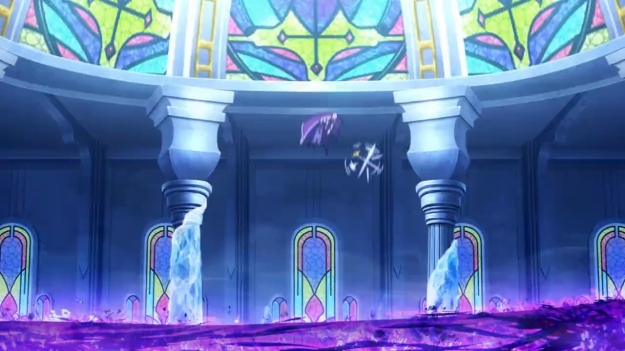 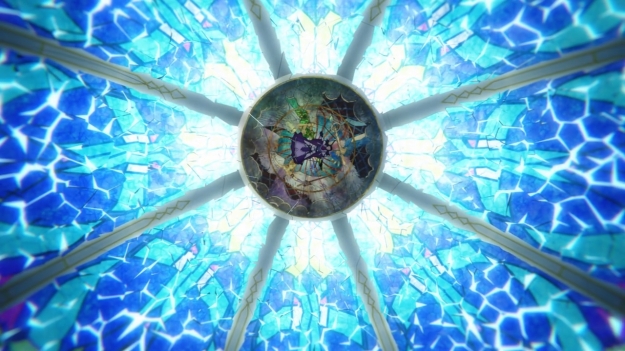 It’s so impressive that it sends Fanatio flying… perpendicular to the attack and into the stained glass window above them. Why? How does it even work like that? I doubt the people storyboarding this show even cares. They probably just thought it would look cool that way. 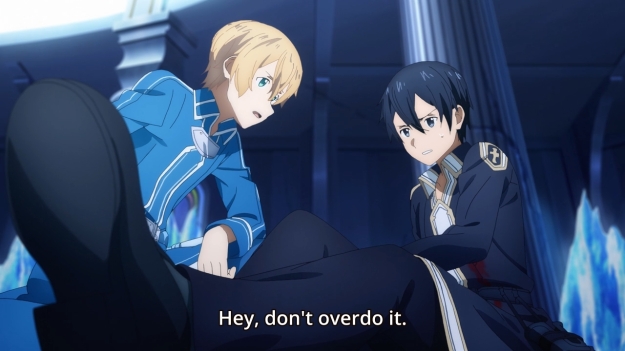 Yeah, bro. Don’t overdo it even though you probably would’ve died if you didn’t.

Something something women lipstick…

Anyways, Eugeo is still mad at the Integrity Knights. He won’t forgive them, because he feels they’re not putting their powers to good use. But I feel as though we’ve already established the fact that they’re being brainwashed by the Administrator. In fact, it was a huge plot point just a couple weeks ago that their memories are often erased on a whim. So he just being a whiny dick to counterbalance Kirito’s all-too-cool demeanor or what? 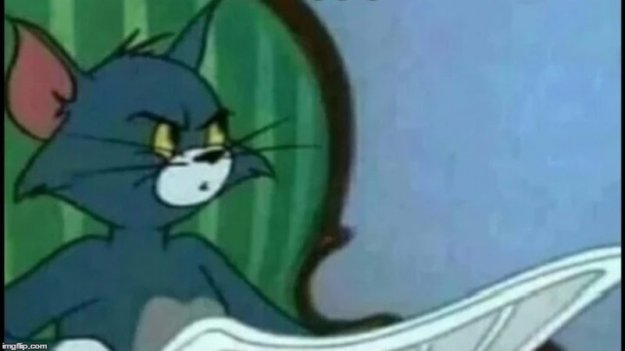 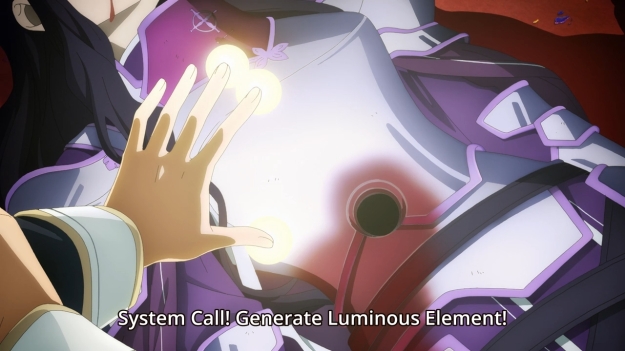 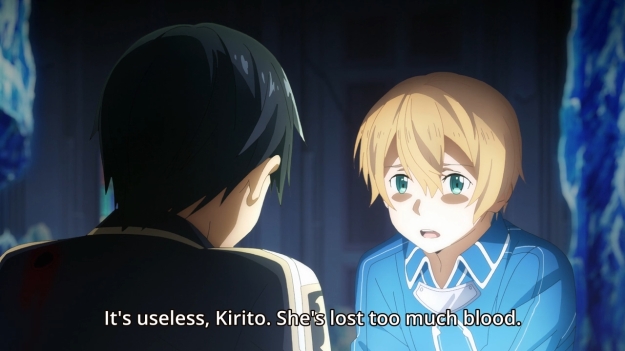 So it turns out our black swordsman did a little too much damage to Fanatio.

As a result, he’s going to have to use their trump card against the Administrator in order to save some random knight whom we barely know anything about. But don’t get me wrong. I don’t mind him being a good person and trying to save everyone that we can. It’s just this show is just so boring and poorly-executed that I have no goddamn reason to care about anybody that we meet. It’s like playing a dungeon crawler with a paper-thin plot, then suddenly bursting into tears over some random NPC on some random floor. It just doesn’t work.

This next part epitomizes my biggest beef with the show. It’s no secret that I have very little respect for the SAO series as a whole. Nevertheless, the god honest truth is that I really wanted to like the show when it first started. If you really care to try and verify that, go back and read my first four or five posts on the series. I tried to give it a fair shake. Unfortunately, the Gary Stu-ness of the main character was just too strong, so I ended up being exasperated with Kirito. Nevertheless, both SAO and SAO 2 (the whole Sinon arc) had some interesting ideas that were just poorly executed. Interesting ideas regarding the nature of virtual reality, simulacra, online relationships, so on and so forth. I feel like Alicization has pretty much left most of those ideas on the wayside, focusing instead on a dreadfully dull ascent through a featureless dungeon for a girl whom I have so little emotional attachment to. This elevator girl demonstrates exactly what I mean.

At first, I was like, “Who cares about some random elevator girl?” Basically, her Calling is to operate this lift, and she’s been doing it for over a hundred years or something. Even though they all have souls, the Axiom Church doesn’t allow her to be human. She doesn’t get to have human dreams and human pursuits. Eugeo has to dig out the fact that the girl honestly just wants to be free. This actually harkens back an interesting moment in the very first series. I don’t remember the exact details anymore, but Asuka essentially wanted to sacrifice the “lives” of the NPCs in order to defeat a floor boss, and Kirito didn’t want any part of that plan. We kinda have the obverse situation. In Aincrad, the NPCs are just objects. They don’t have any humanity to them. But they are given the appearance of humanity in order to make Aincrad just as real as the real world. It’s all a conceit. It’s a ruse to trick the actual human players into embracing virtual reality over the real world. In the Underworld, however, there are no NPCs. Everyone has a real human soul. And yet, we’ve gone and robbed them of that precious humanity so that they would end up acting like NPCs. The conceit runs in the other direction; we’re tricking you into thinking that these poor souls are nothing more than NPCs. Okay, okay, so what is the story ultimately getting at? Nothing really. Because this is just one small moment in a sea of nothingness that is Alicization. The series has drifted so far from its original themes and motifs that small moments like these are the exception rather than the norm. Instead, we just continue to climb the tower so that we can save yet another waifu… which brings me to my next point about Alicization.

We spent episodes with Asuka before she unfortunately became yet another damsel-in-distress. But even when she got stuck in her bird cage, she still got enough “airtime” to help with her characterization. In some ways, you could care about her as a person. Likewise with Sinon. I can’t help but laugh at the idea that you would try and overcome your fear of guns by playing an MMO centered around guns, but whatever! At least we spent half a season developing her character and getting to know her. Alice gets captured right off the bat and disappears for a bajillion episodes. She has no characterization. Eugeo is just the anti-Kirito. Our hero’s cool and collected, Eugeo is emotional. Our hero’s sage-like and wise, Eugeo is childish and naive. So on and so forth. He doesn’t have a strong, distinct personality either. And yet, this entire plot completely hinges upon him and his need to save Alice, who is a complete blank slate. It’s fucking terrible. Previous SAO series were bad because they were dumb and full of wish-shameless fulfillment. But Alicization is even worse because it’s just plain boring and (as far as the characters are concerned) poorly written.

Anyways, I feel like I’ve spent enough energy on this episode already, so let’s wrap it up. They get to the 80th floor and meet Alice. She wants to know why the boys have come here, but she doesn’t give them a chance to speak. Well, either that or they just choose to say nothing. Honestly, I don’t get it. Eugeo just whined moments ago that she doesn’t understand why the Integrity Knights would use their immense power just to serve the Axiom Church, but now that he has the chance to speak to one of them — Alice, no less — he keeps his dumb mouth shut. 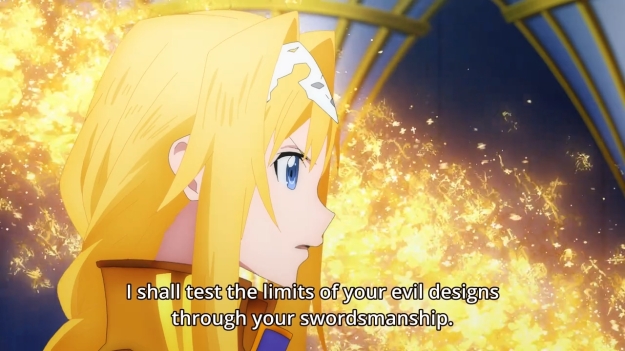 Likewise, Alice keeps calling them and “their designs” evil, but nobody wants to get to the bottom of anything. They just wanna “talk” through their swords.

So Alice pulls out her golden sword…

And of course, for a show this barren of decent storytelling, it has to indulge us on the origin of Alice’s sword like we give a fuck. No, no, don’t try and convince me to care about the random characters. Instead, devote precious time on the weapons’ backstories. After all, I cared so much about Fanatio’s mirror sword, so I’m certain that I’ll care just as much about Alice’s golden sword. 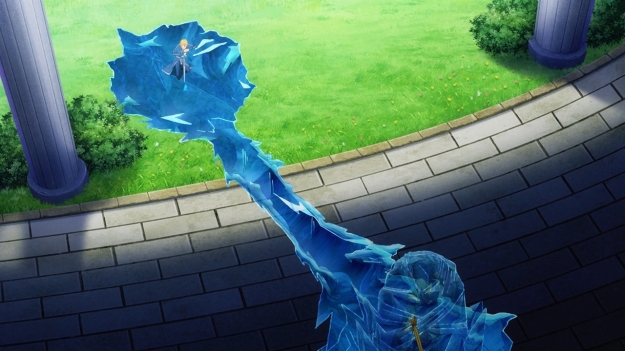 Anyways, Kirito tries to restrain Alice, so Eugeo can use his ice powers. The girl’s sword didn’t get frozen, however, so she freed herself.

Then in the ensuing clash, both Kirito and Alice get blown right out of the side of the tower.

Eugeo tries to chase after them, but the tower quickly “heals” itself back up. He is thus separated from his best bud and the girl he loves. Better get used to it, ’cause this is what Kirito does with everyone’s waifus.

I was going to try and do three updates today, but after SAO, I just feel drained of all energy. And sadly, I don’t even have a game to play anymore since I just beat Tales of Vesperia. Ugh…