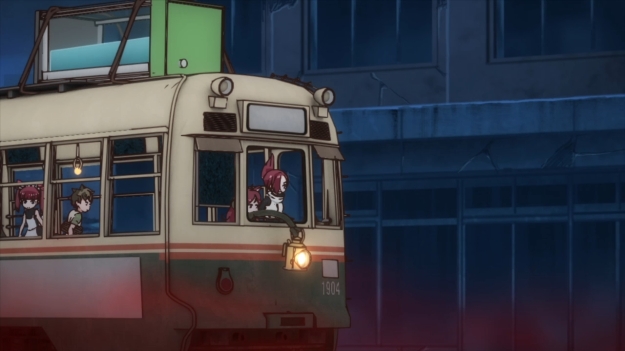 Yeah, I’ve been loosely following this show over the past couple of weeks. I have always had a soft spot for post-apocalyptic settings, and I’d be lying if I said I wasn’t somewhat curious about the show’s mysteries. What happened to this world? What exactly is a kemurikusa? Or Midori? Rin and her sisters are obviously plant-like, but what are they exactly? What led them to think that they are human? Where have all the actual humans gone? Or do we eventually evolve into red-headed anime sisters? Where did Wakaba come from and how did the sisters summon him to this world? What are the “bugs” which are obviously not bugs? What’s up with the ominous red fog blanketing a vast portion of this desolate world? Unfortunately, Kemurikusa also has its fair share of problems to go along with its mysteries — problems that really drag the story down for me.

Up until the group’s latest encounter with a Nushi, the last few episodes almost feels like one of those boring walking simulator video games where nothing happens. The girls left Island One a while ago in search of water, but they haven’t had any luck on either Island Two or Island Three. All they can do for now is to continue trucking on and hope for the best. Maybe the unexplored areas of Island Four will yield some positive results. Nevertheless, the pacing is so slow that I almost started fantasizing about how this same show might feel as survival game instead. I feel that this would make up for the lack of a prominent narrative. Avoid bugs, explore the islands, discover clues about the world and how it came to be, salvage for food, water, and resources, so on and so forth. Survival can become its own story. I just don’t think the show does a very good job of translating it to the TV screen. For the most part, I’m left wanting. Plus, has there ever been a survival game with an anime aesthetic? I honestly don’t know.

My second beef with the show lies with Wakaba. Anime does this thing where nobody ever seems to mind being lost in a complete strange and bizarre new world. Clearly, Wakaba doesn’t belong here. Clearly, Wakaba has more in common with us than he does with the sisters. But like most anime characters of his ilk, does he ever worry about returning home one day? Does he ever worry about how he’s going to survive in this harsh environment? Does he ever worry about possibly never seeing his loved ones again? Nope. Hell, I haven’t even seen him eaten anything except one of the kemurikusa. Those glowing leaves must be hella nutrient rich, because he hasn’t shown the slightest pang of hunger. Maybe he isn’t really human after all. Either way, up until the end of this week’s episode, Wakaba has only shown us two modes: dopey reactions to everything around him and being scared shit-less. It’s the whiny inflection in his voice that really takes the cake. When everything is so weird and unfamiliar, I was hoping that he would at least play the Unfazed Everyman that we can relate to. Unfortunately, I can’t help but think that Wakaba is kind of slow and dumb.

Luckily, being the only male character (as far as we know), the kid is also magically special in his own right. For some reason, he has the ability to sense when a red bug is nearby. He can also tell if they’re about to stop moving. I’m sure there’s a story reason for this, but at the current pace, we probably won’t find out until the last couple of episodes. Nevertheless, Wakaba continues to prove himself infinitely useful to the sisters by hatching a plan that allows Rin to finally take down a Nushi. What’s a Nushi? I guess it’s a really big bug, and she’s never been able to defeat one before. But when the dying Nushi threatens to kill one of the Rinas, Wakaba finally earns his place with the group by instinctively jumps in the way and somehow uses one of the kemurikusa to activate a protective barrier. Alright then. Personally, one Rina is already one Rina too many, so I wouldn’t have minded losing one… 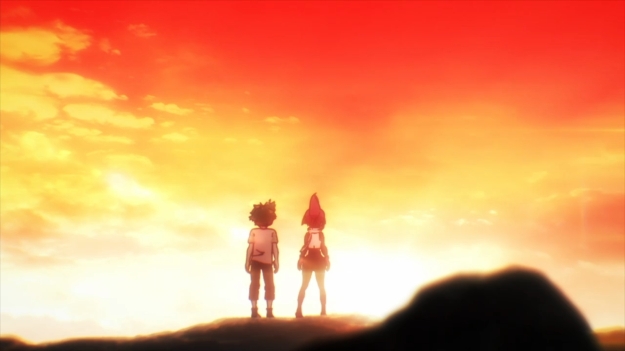 So yeah, that’s where we stand right now. The show’s premise intrigues me, but I’m let down by the sparse storytelling and the weak characters. Despite all my complaints about Wakaba, the sisters are even worse off. At the moment, they all seem to have one-dimensional personalities. Still, the show hints heavily at a Rin x Wakaba pairing, which is just silly to me. Like Wakaba, the girl oscillates between two modes of existence: trying to be a protective, hard ass sister and blushing like a proper tsundere around the guy. And again, the guy is an utterly charmless dope. Even for someone who is a sap for romances in my stories, I can’t help but kinda dread this eventual pairing. But until an episode bores me to tears, I guess I’ll just keep watching for now.  I’m not exactly sure what I’m hoping for. Even if I do get answers to all of the questions I listed in the first paragraph, I’m not exactly optimistic about this show. I don’t instantly write off 3-D animation, but the show’s visual fidelity is nothing to brag about. I guess I’m just here because I’m that curious.

Oh yeah, my current theory is that the plant-like girls are supposed to “recycle” the world by consuming all of the man-made debris now that humans have gone and ruined the world. After all, this is anime, which means nature goooooood and technology baaaaaaaad. And for some reason, the robotic “bugs” are trying to stop the sisters. But obviously, I’m just taking blind stabs at the dark.