So there’s a big party at the castle to celebrate the fact that they managed the survive the previous Wave. Naofumi tells us that he’s only in attendance because there’s a big fat reward. I’m surprised they even bothered to give him one considering how he was busy defending a village instead of defeating the boss. Well, even though Spear Jerk has a bevy of human girls drooling over his pole, the guy just can’t ignore Raphtalia. As a result, he challenges Naofumi to a duel. If he wins, the raccoon girl is freed from slavery. If our hero wins, then… things remain as they are, I guess. 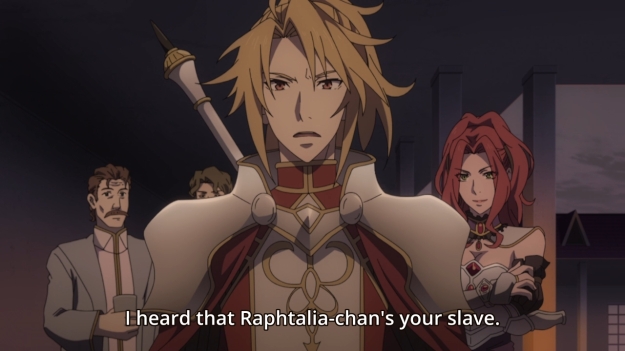 Look, he’s not wrong. The problem is that he’s disingenuous. The problem is that Spear Jerk just wants to stick his spear into Raphtalia. And y’know, that’s my biggest problem with this show. Go ahead and defend a controversial opinion if you want, but at least do it in good faith.

Needless to say, Naofumi’s stance is terrible. People are going to keep bringing up the fact that he’s traumatized. Everything’s stacked against him, and it’s just not fair. The latter is true, but I’ll get to it in a bit. The first argument, however, is just weak. Hardships might make you a meaner person. Hardships might make you rude and uncaring. Hell, maybe you’ll even resort to petty crime like stealing. But it shouldn’t turn you into a slave owner. For instance, I’m not going to kill people just because I’m traumatized. That’s not a good excuse. I’m not going to go out and rape people because I’m traumatized. Likewise, I’m not going to go deny a person of their goddamn freedom just because I’m traumatized. There are some lines you shouldn’t cross, and you’d think that enslaving people would be one of them! I think it’s hilarious how this show acts as though being accused of rape is oh my god so bad but then turns around and has the main character casually say, “Hey, when in Rome…”

More bullshit follows as now the king jumps in to gang up on Naofumi. It’s your country. Clearly, he’s not actually outraged by Naofumi owning a slave, because his country allows slavery to exist. Again, I can’t help but feel that the show is being disingenuous. Arguing against slavery should be a slam dunk. It should be! But unfortunately, you have the egotistical Spear Jerk and this shithead of a king on your team, so you instantly lose any credibility. It’s like having Pol Pot proclaiming that murder and rape are bad.

Anyways, Naofumi would obviously be stupid to agree to a duel, but the king literally orders him to participate. Why? Beats me. I guess they just want to humiliate him. There is literally nothing to gain from this. If they wanted to free Raphtalia, they would’ve just done so. Again, he’s the king. He can force Naofumi to duel, so he can also just cut the bullshit and free Raphtalia right from the start. I repeat, there is literally nothing to be gained from this. They literally hate the Shield Hero, but they won’t imprison him because they need him. But they’ll still try and strip him of his one party member? It makes no sense. As a result, I have no choice but to conclude that this entire stupid scenario is just cooked up by the author in order to garner sympathy for his slave owning main character. Duuuurrrrr, slave owning is bad, but gee, what if you’re stuck in this absolutely ludicrous situation that defies all logic!?!? CHECKMATE IDIOTS 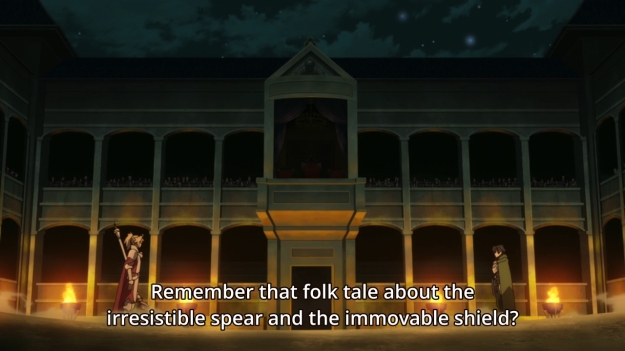 So the duel commences, and… the irresistible what?

They even gag Raphtalia. Clearly, they care about freeing her. 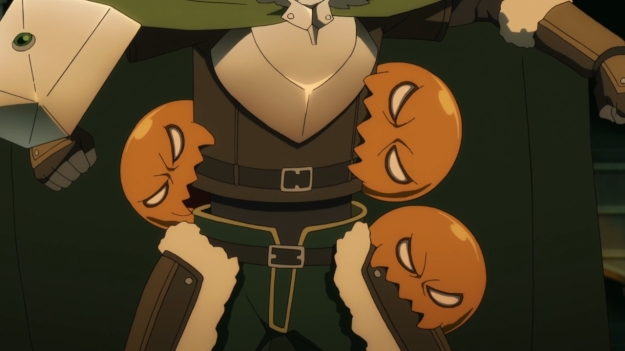 So um, does our hero just carry those balloons on him all day? Is he just a masochist? What does he do when he goes to bed? Does he still keep them on him? 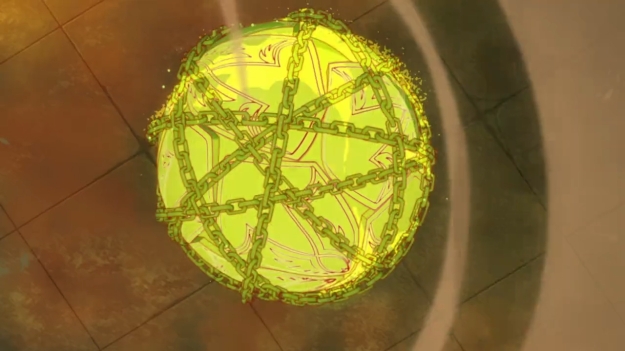 Despite being reluctant to fight Spear Jerk because he technically doesn’t have any offensive capabilities, Naofumi is actually winning this duel thanks to all the new skills he’s acquired. On the other hand, Spear Jerk is just a one-dimensional DPS. It doesn’t look like he can do anything but straight damage.

But of course, the spectators in attendance (all nobles) are full of idiots. We haven’t crafted a living, breathing world full of plausible characters. This is all designed just to get the audience mad and thus on Naofumi’s side. It’s so dumb… but it does speak to a certain strange desire that we all entertain from time to time. It’s like when people fantasize about being cheated on just so they can confront their unfaithful partner and go, “Fuck you; I don’t need you!” Do people actually want to be cheated on? No, but there’s an allure to the idea of picking yourself up after you’ve been trampled upon. You can’t show your indomitable will and resiliency if everything in your life is going swimmingly. Something has to go bad in order for you to prove that nothing can keep you down.

The problem is that Tate no Yuusha no Nariagari has gone to such extremes just to craft this sort of narrative. Poor Naofumi has been summoned against his will to defend a world in which he doesn’t belong. Poor Naofumi has been forced to wield a shield and only a shield, so he can’t fight back. Poor Naofumi has been accused of rape, which we all know is the worst thing that a man can be accused of!!!!! Poor Naofumi has no friends so he has to resort to buying a slave. Poor Naofumi is hated upon by every single person (except for the weapons and armor merchant because boy would it be hard to play this RPG without equipment!). Poor Naofumi is now being humiliated in front of everyone. Any one of these things would’ve been fine by themselves, but when you package them together, it’s just pathetically transparent what the narrative is trying to achieve. 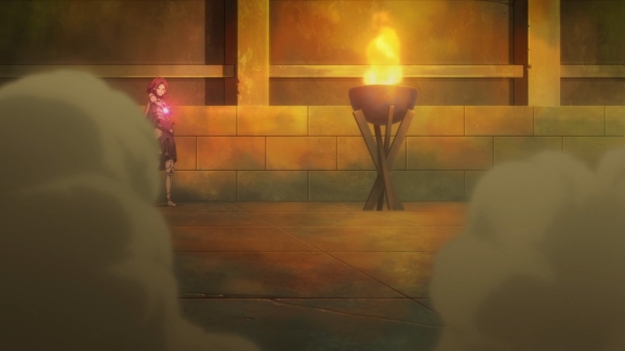 Well, Naofumi was winning up until Myne (but also Malty?) decided to interfere. 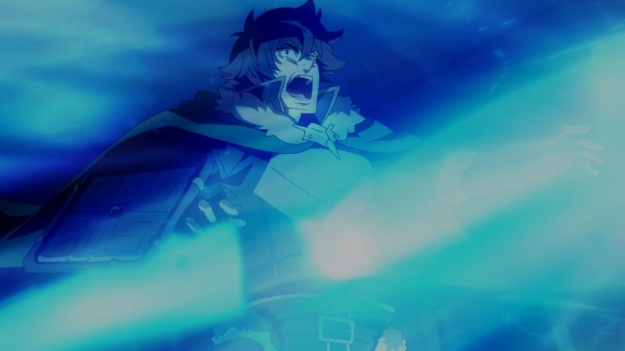 This then allows Spear Jerk to take our hero out with one move. 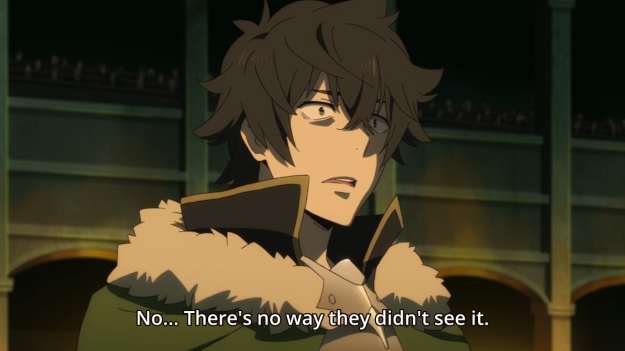 Naturally, everyone (well, almost everyone) ignores the fact that Myne cheated to help her hero. The entire stadium must have hundreds in attendance, but they all collectively agree turn a blind eye to the injustice before them. Again, slavery is obviously bad, but it doesn’t help when you have the wrong person arguing your case.

It’s amusing how much the internet absolutely hates Myne. There is nothing that internet males seem to fear more than being falsely accused of rape. As for a slavery… well, when in Rome as they say! 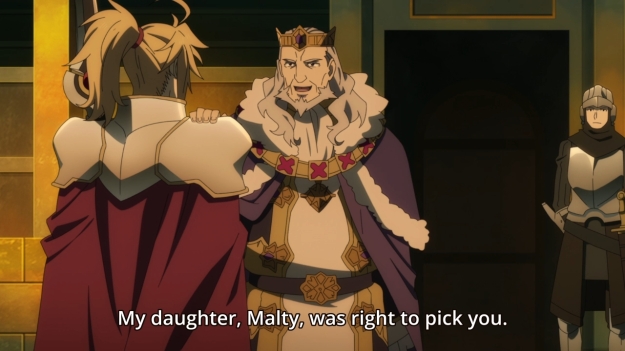 It is then revealed that Myne is actually a princess. Does this matter to me? Not really. But it does help Naofumi come to the conclusion that the king and his daughter has been conspiring to dick him over since the day he was summoned to this world. Why? Shrug. I don’t see any real gain from this considering how they need all four heroes to stop the Waves. Yeah, they get Spear Jerk to like them, but what does that accomplish?

Also, from Naofumi’s warped perspective, Raphtalia has never grown up. She has never discarded her slave rags. That’s fucked up in so many ways, but nevertheless, the story wants us to feel sorry for the guy. 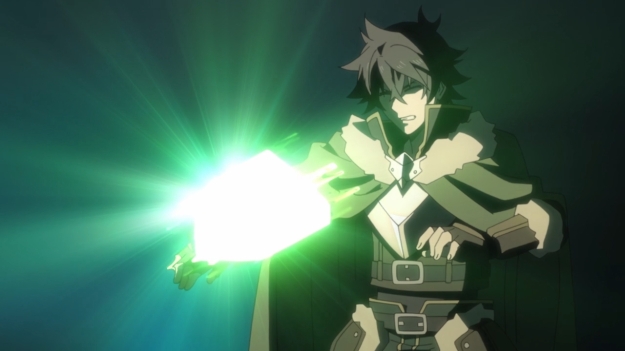 He tries to discard his shield, but it just magically reappears on his arm. Then we see this screen for whatever reason. Maybe it’ll become relevant later. Whatever.

So raccoon girl is finally free, but she’s not happy about it. She tells them off for freeing her. She also defends Naofumi. It’s funny ’cause she’s just not very good at it. 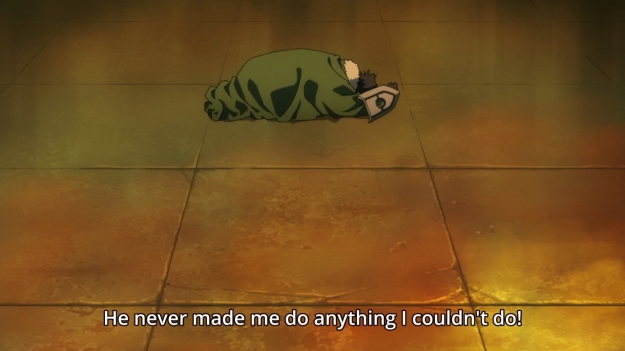 …she then argues that if Spear Jerk really wanted to save a poor, little slave girl like her, he would’ve had to become a slave owner too. Um, no. You could just buy a slave and then free them immediately. Plus, Raphtalia’s situation is complicated. You can’t just say that Naofumi has treated her well. It’s not that simple. I don’t want to go and retype my entire argument from episode two, though.

Finally, the other two heroes decide to speak up. They’re actually not complete idiots. They actually call Myne out for cheating. Hell, they even call the king out. Of course, I doubt that this will actually amount to anything. All that it’ll accomplish is to finally bring an end to this dumb “debate.”

Since she no longer has to deal with Spear Jerk, Raphtalia is now trying to cheer her shitty slave-owning master up. Unfortunately, he accuses her of betraying him when she’s done no such thing. B-b-but it’s his trauma, you guys!

Nevertheless, she sticks with him anyways. Even when he admits that he only saw her as a tool, in her eyes, the ends justify the means. Finally, he sees her for what she truly is… which is apparently a grown woman now. We are told that humans discriminate against demi-humans because they mature by gaining experience. I don’t even know how to respond to that. How does that even make sense? Ugh, I hate you because your age is tied to your levels! Huh? And can you just keep someone perpetually a child by depriving them of experience?

Yeah, you’re not wrong. You’re just the wrong person to make that point. 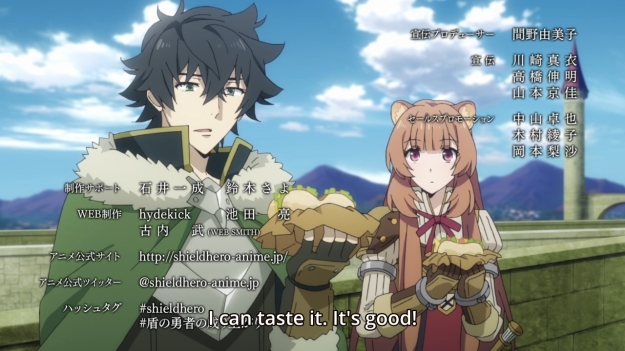 Last but not least, Naofumi can taste his food again. Nothing like the undying loyalty of your waifu to cure you right back up! Y’know, the waifu that you bought as a slave child and subsequently threatened to abandon when she was too traumatized to fight (how come her trauma doesn’t matter?), so she had no choice but to see you as her lord and savior lest yet another parental figure abandons her again. Yeah, that waifu!

The only good thing to come out of this is that maybe we can finally put the whole false rape accusation and slave arc behind us. Raphtalia’s no longer a slave, and Naofumi is supposedly cured of his trauma. Can we finally move on and introduce some characters that aren’t complete shitheads?