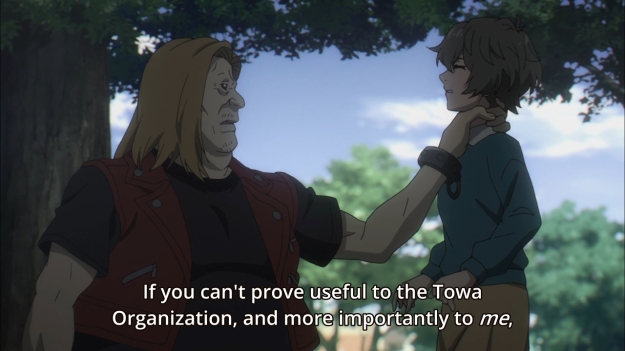 I tried to blog this show with, y’know, regular paragraphs and such, but since it likes to jump around so much, I guess I’ll revert back to my old bullet point style. So yeah, let’s get to it.

— Spooky E (a.k.a. Fat Evil) and Aya (a.k.a. Camille) belong to the same organization — the mysterious Towa Organization — and the former is seeking clues about Boogiepop… I think. Aya’s initial mission is to apparently sleep with as many guys as possible (why?), but Spooky E now wants her to look into the Boogiepop problem as well. These two are supposedly synthetic humans, which is fine. Aya looks like a normal girl, because she’s supposed to blend into society and seek out sexual partners. That makes sense. But why make Spooky E such a monstrous-looking character? Did the Towa Organization make him look like Fat Evil on purpose? Shrug, I don’t get it.

— Since Aya is here to see Masaki, the guy eventually sees Fat Evil threatening his girlfriend (or are they just friends at the moment?). He goes up and… um, actually puts up a decent fight against Spooky E. Look how much air he’s getting! What is this kid?! They can’t teach you that in karate!

— But at the end of the day, Masaki is still just a normal boy, so Spooky E overpowers him. Luckily, he wakes up and finds himself in Aya’s lap. It doesn’t appear as though he has been brainwashed like Shinjirou was. Maybe Aya convinced Spooky E to spare Masaki.

— The perspective now switches over to Suema, who we met rather briefly in the second episode. I mean, she didn’t really have much of a role to play in the first arc, but I guess she’ll be more important in this one. I have no clue what she’s trying to say here, though. How does one even come to that interpretation?

— At Kotoe’s behest, Suema starts looking into Jin’s strange behavior. Why does Kotoe care? ‘Cause they’re cousins. There are so many characters trying to share such a small amount of screentime that I had to go back to last week’s episode to remind myself about this girl.

— We soon see Suema do a bit of sleuthing. Japanese teens are just so capable, aren’t they? She proceeds to sneak into Jin’s office and comes across that crumpled up sketch of the Imaginator. Again, I really thought that the Imaginator would be our antagonist, but right now, it seems like a tie between Spooky E and Jin.

— Oh no, it’s the invasion of the nipple-less aliens.

— But seriously, maybe it’s a metaphor for sex or something. The guy used to despair over the fact that he could see people’s weaknesses, but he couldn’t actually help people fix said weaknesses. But after his encounter with the Imaginator, it seems as though he’s decided to take matters into his own hands. I’m curious about one thing, though: why does it appear as though he’s only interested in fixing his female students? This is why I jokingly wonder if the guy groping their bare chests is really just some metaphor for sex. After all, this is a story about teen problems (like most anime). The girls come to him with their problems, and he offers a quick-fix solution that boosts their confidence. In the real world, what could a grown man really offer a teenager? Maybe give them some self-confidence because he’s sexually attracted to them, but that’s not going to last very long.

— Anyways, I thought we were done with Shinjirou, but we get one last scene with the guy. He shows up to the academy one day, but tears suddenly begin to pour from his eyes. After the events in last week’s episode, he should be freed from Spooky E’s mind control. Nevertheless, he feels as though he’s lost something important. Hm, I wonder what. There’s a girl with him, and I have to assume that she’s his girlfriend (y’know, the one in the letter that Boogiepop told him to meet). Maybe what Shinjirou lost is his crush on Masaki. The guy came out of this whole ordeal relatively unscathed, but he never really did resolve his issues with Masaki.

— Finally, Suema stumbles upon Aya on the school rooftop, and the latter is considering suicide. It sounds like our girl is conflicted, because she has developed feelings for Masaki. Nevertheless, she has her mission to help Spooky E locate Boogiepop, so she’s asking her boyfriend to pretend to be Boogiepop? Wait, what will that accomplish? If he goes around beating up criminals, this will help them find the rumored shinigami? I guess I’m just kinda confused about that. But yeah, Aya knows that there’s a good chance Masaki might get himself hurt doing this. She cares for him, so she will also care if he ends up hating her, yadda yadda yadda. This is why she is considering suicide.

— Suema eventually talks the girl down, telling Aya that there’s beauty in the struggle. There’s nothing wrong with dying, but you can’t go down without a fight. Aya then asks if it’s okay to continue struggling even if this means she has to fight Boogiepop. Suema still says yes. Well, she knows Boogiepop is a good person, so her friend probably wouldn’t hurt Aya.

— With the episode coming to an end, what are my current thoughts about the series? Shrug. I guess I wanna see how everything plays out, but like before, I don’t have a strong emotional connection to any of the characters. More importantly, the story doesn’t really mean anything to me. What’s the thematic point to all of these events? Beats me.