It turns out that the queen is keeping a close eye on Naofumi. Why? Beats me. The better question is why she isn’t back home. We’ll find out later, I’m sure. It also looks like she isn’t a fan of her own daughter. Well, maybe the woman should’ve done a better job raising the girl.

Speaking of the Naofumi, we’re just now getting to the heroes’ reward for dealing with the first Wave. Not surprisingly, he gets a paltry sum that pales in comparison to the other heroes (Spear Jerk gets eight times his amount). To add insult to injury, the king wants to charge him for removing Raphtalia’s slave crest.

Luckily for him, both the sword hero and the bow hero come to his defense. So… what’s their deal? I can’t imagine that they’re actually decent people. Remember: the number one rule of these trashy harem shows is that every guy is a dickbag until he recognizes the harem lead as his superior. Clearly, Ren and Itsuki both think they’re better than Naofumi. But putting that aside, this is twice now that they’ve spoken out in his favor. It wouldn’t hurt the hero to, y’know, thank them. But instead, he just charges off without a word. Actually, he wanted to rant and rave at the king, but Raphtalia reminds him that they have better things to do… 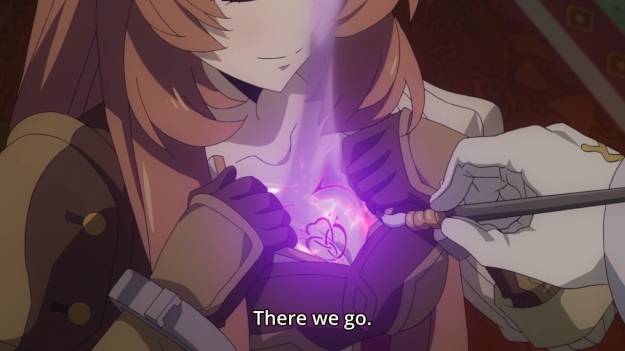 …like enslave her again! So you buy a slave girl who lost her parents (which she even has nightmares about) and assume a paternal role in her life. You force her to kill even though she is triggered by blood. When she doesn’t listen to you, you threaten to abandon her. And now that she’s all grown up, she still wants to be your slave. Y’know, just normal isekai things. But look…

…this is her idea! Totally clears the slave owner. Thank you!

Also, she totally wants to bone her father figure. Again, just normal isekai things. The slave trader even adds that Naofumi could sell a virgin raccoon like Raphtalia for 35 smackeroos! Forget bitcoins! Buy all the slave girls! We’re going all the way too the moon with this investment! 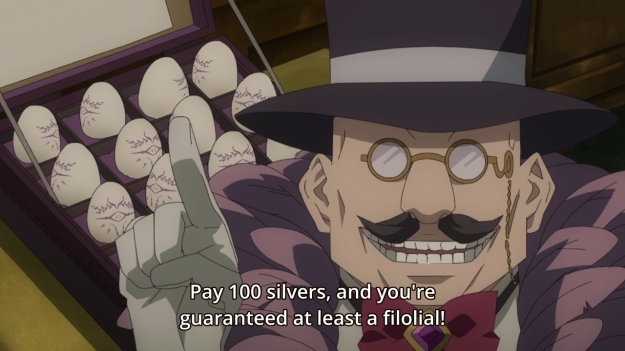 As a result, Naofumi buys a monster egg. If you’re lucky, it can hatch into a dragon, which prompts our hero to sarcastically ask if this is a gacha game. A gacha game where you get slave girls? C’mon, this isn’t Fate! But I digress. Normally, you get a filolial from the monster egg instead. What’s a filolial?

Dude, that’s just a chocobo. Like, you’re not even trying to be original.

Yeah, what she said! More importantly, you can’t screw a chocobo! How is Naofumi supposed to have sex with that?! We’re trying to build a harem here! All isekai anime are harem anime! That’s just the law! I demand that that this chocobo turn into a girl at once!

Anyways, what follows is a bunch of merchants being grateful to Naofumi for defending Lute Village, but that stuff is boring. Let’s get back to the chocobo that we can’t have sex with.

Yep, definitely can’t screw that… unless… 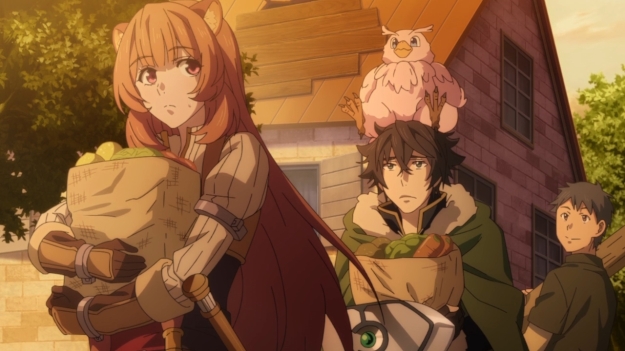 Much like Raphtalia, the chocobo grows up very quickly. By the way, Naofumi names it Filo.

Well, since we utterly nothing better to do, let’s trot out the same goddamn conflict again. According to Malty, Spear Jerk is now a Lord, and he’s in charge of Lute Village. They start demanding that the villagers pay a ridiculous tax. You get the feeling that Malty is only here after hearing about Naofumi defending the village. So what am I supposed to think? That the girl just sits in her room every night, scheming up ways to dick over the Shield Hero? But why? What is even the point? What does she get out of this? Does she get a quivering orgasm every time Naofumi suffers? The author isn’t even trying now to give her credible motivations. Maybe he never did. Maybe he just wants to rail against this “boogeywoman” who is out to screw over innocent men like him. Aargh, fake rape accusations everywhere!

Luckily, the queen’s people are here, and they must have told Malty that the village belongs to Naofumi instead.

As a result, the girl proposes yet another duel between Naofumi and Spear Jerk. Ho hum.

So we get a dumb race between Naofumi and Spear Jerk, because we need to see what Filo is capable of. Apparently, chocobos are faster than dragons… which… aren’t really dragons in this universe. They’re just raptors.

Even though Malty cheats not once, not twice, but thrice, Filo still wins by a beak. Dude, Spear Jerk kinda sucks. Maybe she hitched her wagon to the wrong guy.

Speaking of wagons, Naofumi gets one as a reward for saving the village once again. This time, from evil socialist taxation. 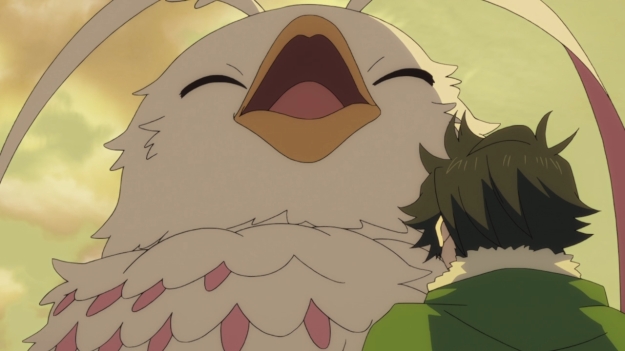 Also, winning the race somehow turned Filo into a fat chocobo. Again, not screwable. Rectify this, anime! And with their new mode of transportation, he and Raphtalia hit the road to become good ol’ entrepreneurial traders. But when they wake up the next morning… 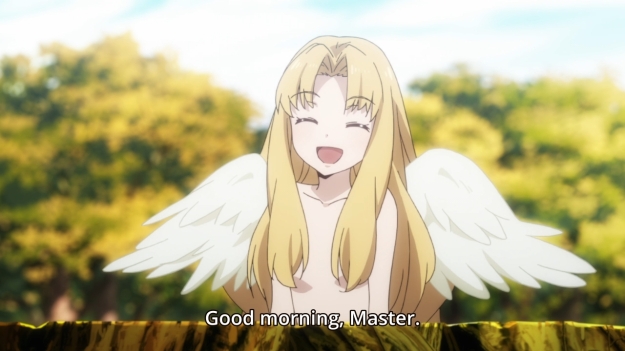 There it is! I knew there was a girl beneath all those feathers! A girl you can screw! It’s even a loli! Very cool and very legal! Good ol’ isekai anime! Never change, you fucking degenerates.

14 thoughts on “Tate no Yuusha no Nariagari Ep. 5: Why own one girl when you can have two?!”