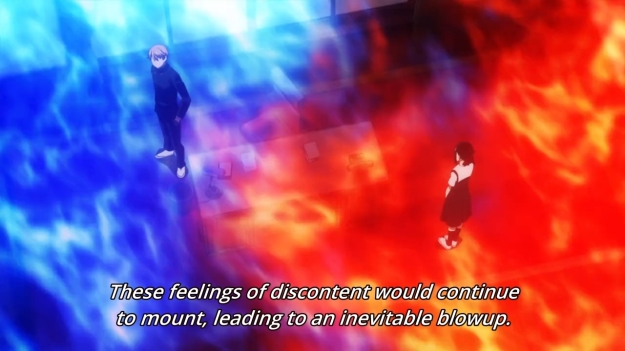 In the first two-thirds of the episode, we’re still dealing with the fallout from last week’s incidents. Essentially, our not-quite-a-couple technically made up offscreen, but emotions have never mixed well with technicalities. As a result, resentful feelings remain. Kaguya would be mad if Miyuki had laid a finger on her, but he didn’t. So instead, she’s mad that he didn’t. After all, she is a young, attractive girl, so why wouldn’t he lay a finger on her? Sounds to me like she just wants to be mad. On the other hand, Miyuki is a little ticked off himself. After all, he did want to lay a finger on her, but he didn’t. He fought every impulse in his body to be respectful, and yet, she’s still taking her anger out on him. More importantly, the guy is just confused. Since he didn’t do anything to Kaguya, he shouldn’t feel guilty. But because he did want to do something to Kaguya, he feels a little guilty. Ah, relationships are a mess. Especially relationships where the participants have no guts. They just cover it up by being prideful, but the reality is that both Kaguya and Miyuki are horribly insecure. On the other hand, Chika always seems so happy and carefree. She keeps herself above the fray by being either oblivious or just plain disinterested in romance in general. Meanwhile, her two friends torture themselves everyday over their stupid feelings.

In the first third of the episode, the student council received two cakes from the headmaster to share. Unfortunately, Yu eats one of them all by himself. So to nobody’s surprise, Kaguya and Miyuki proceed to fight over the fact that the other person should have the second and last cake. Back when Miyuki first joined the student council, Kaguya had her hair down. Gotta say I much, much prefer her current look. Then again, I’ve always preferred it when girls put their hair up or pull it back. Anyways, she told him that she liked strawberry shortcake back then, so he’s trying to use this precious memory to win the present argument. Honestly, who doesn’t like strawberry shortcake? I’ll even take the crappy supermarket shortcake from Safeway. In any case, Kaguya counters with a memory of her own. She remembers Miyuki telling her all about how his family doesn’t really celebrate Christmas (’cause they’re poor), so he’s never even had a Christmas cake. Don’t worry, dude. Just wait a few more years and you’ll be able to enjoy all the Christmas cakes that you want. But I digress. Eventually, the two of them come to the the only correct solution, i.e. the Communist solution: this isn’t your cake or my cake — this is our cake!

Sadly, Chika is a filthy capitalist who steals everyone’s cake for herself: 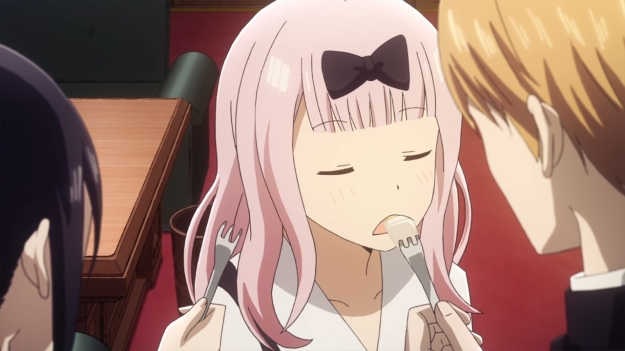 In the second third of the episode, Kaguya confides in Nagisa about the lingering awkwardness that still remains between her and Miyuki. Speaking of Nagisa, she and her boyfriend are kinda like foils for the main couple. If you want progress, look at those two. If you want frustrating, stuck-in-the-mud faux drama, look no further than Kaguya and Miyuki. Anyways, just revisit the first paragraph of this post to get a gist of Kaguya’s frustrations. On the other side of the campus, we see Miyuki confiding in Yu instead of Nagisa’s boyfriend (do we even know his name?), and I have to admit that the first-year actually manages to steal the show with his rant. In the end, however, talking to Yu helps Miyuki sort out his feelings. And in doing so, this spurs him to admit his guilt to Kaguya. Apparently, he did touch her when they shared her bed. Obviously, this is your typical anime, so our hero can’t be too bold. Yo, this ain’t Domestic Girlfriend, alright? Ain’t no hormonal teenagers banging anyone here. As a result, the guy confesses to merely touching her lips once with his fingers. Hell, I don’t even remember this happening because it sounds like such a non-issue. Nevertheless, his confession is enough to satisfy Kaguya, so they’re back to normal. Unfortunately. In other words, let’s maintain the status quo forever.

Sure enough, the last third of the episode feels as though no progress has been made. I dunno, maybe 5 cm at best. Basically, summer vacation is coming up, and Miyuki obviously wants to spend some time with Kaguya. They had this discussion episodes ago, but they never really agreed to anything. And like usual, he’s too chickenshit to just ask her out directly. According to that big brain of his, any move he makes would just result in Kaguya looking down on him. Well fuck, if he thinks that poorly of her, why does he even like her in the first place? Clearly, I’m losing a bit of patience with the characters even though this is only supposed to be an inconsequential romcom that isn’t meant to go anywhere (despite all those lofty claims I heard). Honestly, the show’s just not funny enough to justify its monotony. And yes, I think the show is getting monotonous. I think the show isn’t very dynamic. It’s the same jokes week in and week out, and since nothing ever changes, it quickly becomes boring. Even after “everything” that happened between Kaguya and Miyuki in the past two episodes, it just amounted to the two of them returning everything back to normal. Yawn.

Let’s make a long story short. Again, Miyuki wants to hang out with Kaguya, but he’s too much of a wuss. So he tries to make it a group thing, but Chika keeps ruining his plans. Apparently, she’s spending the entire summer globetrotting. At the last second, however, Yu saves the day by opining about how this will be his last opportunity to spend time with the upperclassmen. So at the very least, he hopes to make some generic anime precious memories with them at the upcoming summer festival. And just like that, the date is set. Oh, I’m sure Kaguya and Miyuki will find themselves looking at the fireworks together. And I’m also sure that this won’t lead to anything.

2 thoughts on “Kaguya-sama wa Kokurasetai Ep. 10: Back to normal”