All work and no fun makes me something something, so I’m too lazy to come up with a better title. Before I get started, I guess I should explain why this post is going up on time. The simple answer is that it takes me more energy to write about Mob Psycho 100 and Dororo. On the other hand, I don’t really care about Tate no Yuusha no Nariagari. I’m just taking the piss, so it’s relatively easy for me to cover this show. So without further ado…

— The next Wave is here, and at first, Naofumi’s party is only concerned with defending the villages. They even have some badass oba-san who knows kung fu to assist them. How peculiar.

— Anyways, we quickly learn that the other three heroes are not working well together at all. Bow Jerk is just blindly firing arrows at a giant, flying pirate ship from the ground level. On the actual ship, Spear Dick is busy fighting one of the serpent’s heads. He calls it a kraken, but it seems more like a hydra to me. Last but not least, Sword Dork is stupidly killing the same skeleton captain over and over again. When challenged on this, he claims that the undead will eventually go down if you kill it enough times. Ehhhh…

— From a video game standpoint, that could be true. But if you’ve been at it for three hours, I dunno, I think it’s time to try a different tactic.

— So sure enough, it’s up to Shield Hero to save the day. I-I-I thought you guys said he wasn’t going to be your generic OP isekai hero! 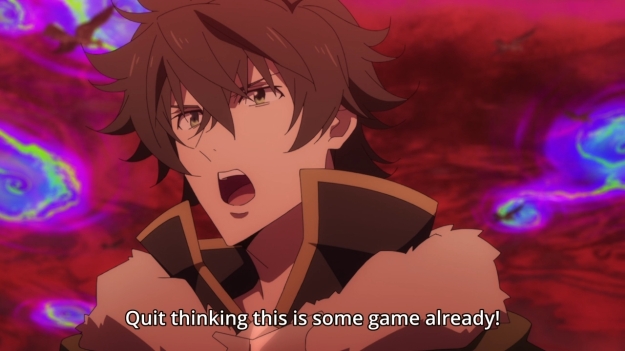 — Of course, being OP encompasses more than just pure power. If you always have the answer to every problem, then you are arguably OP from a narrative standpoint. And the problem here is that Naofumi doesn’t even have to be very clever in order unfuck this situation. Oh? We’re up against undead enemies? Gee, I wonder what light magic will do… I just think it’s silly that nobody else thought to try light or holy magic in the last three hours.

— Sure enough, when Raphtalia casts a light spell, the enemies’ weaknesses are finally revealed. And once they are defeated, we finally get the actual boss… I think. I dunno, it’s just some Chupon-looking mofo.

— At first, no one is putting much of a dent into the boss’s HP. Raphtalia and Filo can whittle the boss down eventually, but Naofumi is afraid that his guys defending the villages won’t be able to hold out for that long. Oh no, what do we do?!

— So he begins to hear the undead dragon’s voice. I guess its soul will forever linger in Naofumi’s shield.

— Filo is also affected since she ate a huge chunk of the dragon’s core. Oh well, a fat, angry chicken is still better than some jailbait loli. Plus, Link knows all about fat, angry chickens and their destructive powers. 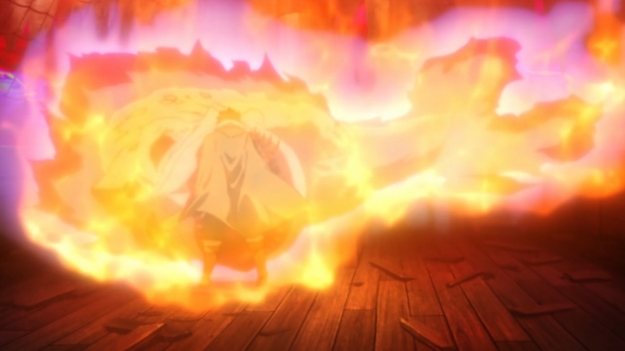 — So with this Rage Shield, Naofumi goes berserk and does… what, exactly? I dunno. Burning the boss up, I guess.

— Meanwhile, one-dimensional Malty stands off to the side and mocks the Shield Hero for no real reason other than the fact that she’s a terribly written character. Like I’ve said before, she’s just this weird boogeyman who represents all the negatives of the female gender. The writer doesn’t even bother to make her seem the slightest bit believable or interesting. It’s like her sole purpose in life is to just get internet nerds riled up about a fictional character.

— And to contrast her, we have the deathly loyal Raphtalia. She proceeds to rip into the other heroes for being petty children. It’s interesting how the rest of the other heroes’ party members are a complete non-presence. They have no opinion on what’s happening in front of them, I guess.

— Anyways, Shield Hero is in danger of possibly losing himself again, but this time, he has raccoon girl’s love and support! Ah, we should all be so lucky to buy ourselves a slave daughter who wants to bang us.

— So finally, Naofumi comes back to his senses, traps the boss in a giant ball with spikes on the inside, then sticks the ball in a floating Iron Maiden that he somehow managed to summon. So… more spikes. And just like that, it almost seems like he defeated the boss by himself. I mean, sure, maybe it was weakened by the combined efforts of everyone there, but… I thought the Shield Hero wasn’t going to be OP. What’s the downside here? Like, does this have any drawbacks? Is he extremely tired or what?

— Well, he doesn’t have the luxury to be tired, because as soon as the boss is defeated, another one shows up. But it’s okay, because a fan-wielding maiden suddenly defeats it all by herself. Introducing herself as Glass, she also disparages the other three heroes. 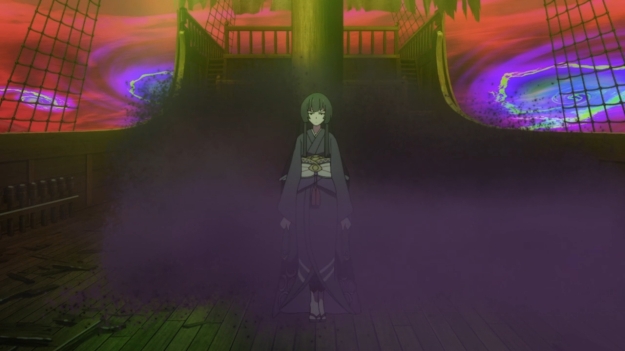 — She’s only impressed by Naofumi, and as a result, she wants to challenge him to the “true battle of this Wave.” Oh boy. It’s funny, though. She doesn’t seem to fit in with the rest of the Wave mobs.