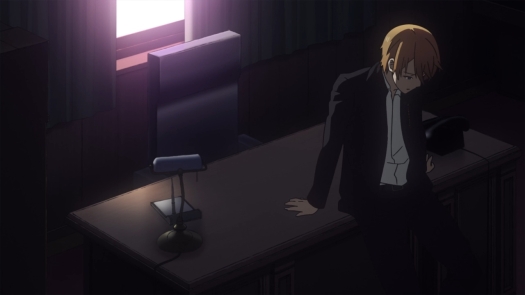 If we’re going to go out with a bang next week, then this episode is going to have to be a downer. And for the last nine or so minutes, it pretty much is. Luckily, we get to start with two rather irreverent short stories before the wave of sadness hits.

— First up, the show has been pretty light on fanservice, but I guess no anime can ever truly hold itself back.

— The true power couple of the series.

— So what’s up? Well, Kaguya and Miyuki only made plans to see each other on the night of the fireworks festival. As a result, they’ve pretty much been ignoring each other for the rest of the summer vacation. God, that’s depressing. They’re wasting the most carefree days of their youths.

— It turns out Ai follows Miyuki on Twitter, which sparks Kaguya’s curiosity. Apparently, our heroine’s got the technological know-how of a grandma, because you literally need to teach her how to create her own Twitter account. Ai even has to print out a sheet of paper full of people’s account info. When has that ever been done! I can’t remember the last time I ever printed anything with regards to social media! I dunno, this is too much for me. When it comes to looks, I would prefer Kaguya over Chika, but I don’t think I can deal with someone who is this oblivious about technology. After all, my job is literally in the tech sector.

— And yet, the girl is good at typing. Well, she’s gotta write papers, right? Don’t need the internet for that. I bet her family buys Microsoft Office every year or some shit.

— Man, it would be sweet to be this rich. As a side note, I am saving up for an out-of-country trip next year. Where am I going? Leaning Europe, but East Asia is also up there.

— Kaguya suddenly thinks she’s been banned from Twitter even though she hasn’t tweeted a single thing. As luck would have it, Miyuki has his tweets protected, so she can’t stalk him anonymously… kinda. She’s going to have to follow him and thus request access to his tweets if she wants to use her own personal account. And obviously, you know she can’t. She can’t make the first move. No Shinomiya can make the first move! Alas, this whole short story is just a microcosm for her entire futile relationship with Miyuki.

— Anyways, the result of the first story is that nothing happens. Great.

— In the second short story, we step away from the Kaguya-Miyuki nightmare to indulge in some Chika silliness. After traveling across the entire globe, the girl now has a craving for ramen.

— As an aside, ramen outside of Japan can’t be that bad. Isn’t there a sizable Japanese population in Brazil? I’m sure she could find decent ramen there. I also here that it’s pretty good in Singapore. 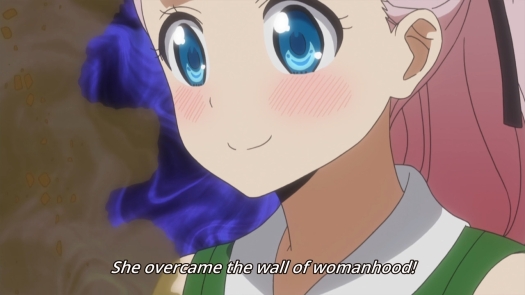 — I dunno, I didn’t really enjoy this short story much. It’s got some weird, off-putting nonsense like how both the ramen shop owner and the other customer initially refuse to take Chika seriously, because most women don’t… like… garlic? Huh? She then blows them away by gulping down the broth, but isn’t that what everyone does? In fact, this sole act somehow reminds the ojisan of his youth. Alright, dude.

— The only real prize here is seeing Chika pull her hair back into a ponytail.

— So let’s move on. The third short story is kinda depressing. Again, both Miyuki and Kaguya are wasting away the best days of their youth. They want to see each other, but they’re both so gutless. How many times has the guy written an email to Kaguya only to delete it at the last second? Good lord. I can’t stand it… especially since I’ve already had to endure 10 previous episodes of the same dynamic.

— As always, the two kids have to do things the hard way. Instead of just messaging each other like normal kids, they both decide to drag their asses to school on the off-chance that they might run into each other. Unfortunately for these “star-crossed lovers,” their timing is a little suspect. Kaguya gets there first and pretty much drapes herself all over Miyuki’s desk. By the time the guy arrives, however, she’s already given up and gone home for the day. And… that’s it. No happy ending here. Much to my surprise, the credits began to roll.

— After the credits, we actually get a fourth short story. It’s one of those rare occasions where the anime decides to inject a little pathos into its story. The show is often so carefree and lighthearted that you often forget about Kaguya’s situation. Miyuki can’t make any progress, because he’s just a huge wuss… as far as I know. On the other hand, Kaguya stubbornly refuses to make the first (direct) move, because she’s got a fucked-up upbringing.

— The poor girl has never gone on a family vacation. Her only friend is her personal assistant. She doesn’t really know what it’s like to be loved by her father. She’s an isolated princess trapped in her ivory tower. And even when she finally gets the chance to hang out with some friends, she’s dragged away from any semblance of happiness by her cold and unloving father. The dude barely even acknowledges her. The list of negatives just go on and on and on. And despite it all, the girl tells us that she’s okay. Because her life is supposedly enviable or something.

— Of course, it’s only enviable if you’re looking in from the outside. It’s like social media. You only get to see the good parts. Nobody shares the bad parts about their lives.

— Furthermore, money is great, but it’s also functionally useless without the freedom to use it. If you can’t actually spend the money you have, then it’s just a prop. Eventually, Kaguya will probably be able to use her family’s wealth at her own discretion. Eventually. When she’s old and broken down by her family’s toxic philosophy. But at the moment, you could argue that she isn’t really rich at all. Like she says, she’s just a creepy Japanese doll on display.

— On a narrative level, however, all this pathos only matters if we counter it by making real progress. I don’t want to hear about some “woe is me” situation if there’s no payoff. I don’t want to drag a character through the mud if they don’t eventually get up and try to improve their situation. Well… it doesn’t even have to be a positive payoff, but something needs to happen. Otherwise, this will all have been for nothing.

— Maybe next week’s finale will be that long-awaited payoff. Maybe something will finally happen between Kaguya and Miyuki as they stand beneath the stars. 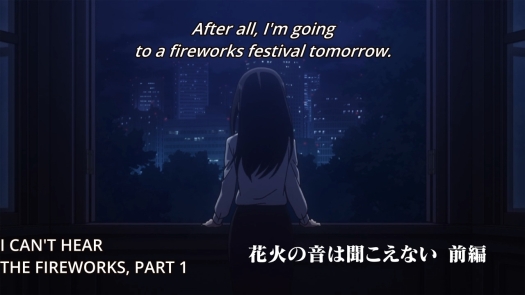 — But if it’s not a full blown confession, I doubt I’ll be very satisfied by the ending. And trust me, I am not expecting either of them to make any real moves to better their tired “will they, won’t they” relationship. We just had 11 straight episodes with barely any character development. I would love to be surprised by the show, but we’re creatures of habit. I’ve been trained by the anime itself not to expect anything.

6 Replies to “Kaguya-sama wa Kokurasetai Ep. 11: The darkest hour is just before the dawn”