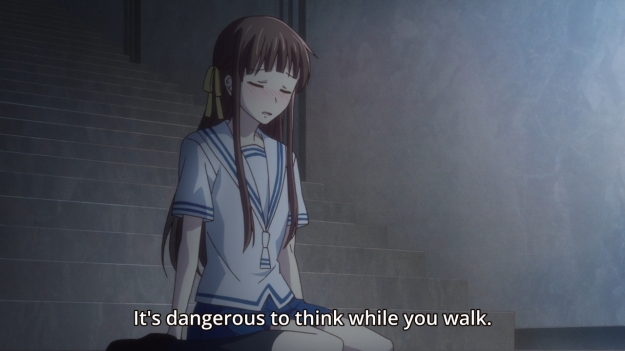 What do you do when your heroine is an airhead?

— The cultural festival is coming up, and Tohru’s class has voted to run an onigiri stand. Sounds kinda boring to me, but I don’t have that emotional attachment to rice balls. I didn’t grow up eating them.

— I can’t tell if these characters are stupid or what, because Kyo suggests having people fight for the rice balls. Yuki is supposed to be the smarter one, but he wants to mix in some duds for people to randomly pick out. We want to do that… why?

— Anyways, Kyo is the cat guy, so cats just randomly swarm him! Haha, isn’t it so quirky! I feel bad for the snake family member.

— Since no major plot point has been resolved, the story is just going to keep cramming the same theme down our throat: we always think the grass is greener on the other side. Kyo has an inferiority complex and wishes he could be part of the Soma family. Yuki thinks nobody likes him and wishes he could befriend people as easily as Kyo. One guy wants respect, the other guy wants companionship. For both of these boys, these problems are supposed to be equal… I think. But I dunno, I feel worse for Kyo. Your family is supposed to love you. Friends? Not necessarily. Plus, people actually want to be Yuki’s friend. Maybe he thinks they’re phonies because they see him as some sort of trophy, but that’s better than being outright rejected by your family. But who knows? It has only been three episodes. I doubt I have a clear picture of everything. It’s just that at the moment, I find it hard to sympathize with Yuki.

— They fight, they bite,
They bite and fight and bite,
Fight fight fight, bite bite bite,
The Itchy & Scratchy Show!

— In the first half of the episode, Tohru bumps into some blond kid who speaks really bad German at her. Here’s your obligatory shota character, because of course that’s a thing. It’s gross, but whatever. We all know she won’t end up with him.

— Later that night, it’s Yuki’s turn to walk Tohru home. A pair of drunk salarymen bump into the girl, who then bumps into Yuki… and well, you know what happens next. They’re not even hugging, but he still transform into a rat. So this is good touch… and this is also good touch… but this is bad touch! She’s not even hugging him, though. She’s not even touching him on purpose either. Oh well.

— Haha, get it? He feels like he’s in a cage, so he’s visually depicted behind bars. Visual metaphors are clever.

— Then as a rat, Yuki opens up to Tohru about his problems. Nothing new here. And again, nothing I’m too empathetic about. Plus, in this day and age, you can find friends pretty easily online. On the other hand, I dunno about finding a family online.

— Tohru barely knows these dudes, but she already thinks they’re great. There’s a reason for that, I guess.

— When it starts raining cats and dogs outta nowhere, a naked and hairless rat appears in front of Tohru. Great. 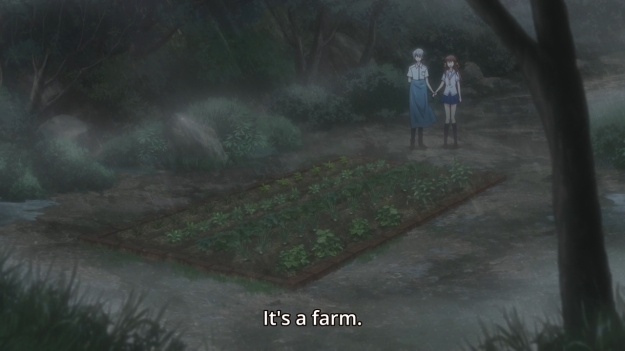 — Apparently, a sudden typhoon is hitting Japan, so Yuki runs out into the rain with a tarp. Tohru doesn’t hesitate to follow him, and in doing so, she learns that he maintains a vegetable garden by himself.

— So he calls her kind, which triggers Tohru to go on this big spiel about how kindness comes in all shapes and colors. As a result, everyone has a sort of kindness to them. People’s kindness just aren’t always easily recognizable. It’s so corny. Plus, they’re in the middle of a downpour and yet they’re just casually carrying a conversation without any trouble. It’s a bit hard to swallow for me. Maybe these two love the rain? Maybe all that wind and water isn’t cold to them? All I know is that I got taken out of the moment.

— The girl also tells us how her mother had wanted her to believe in people. Something about how doubting is easy — being cynical is easy — but it’s harder to put your faith in others. Maybe that’s true. Maybe. But it seems kinda dangerous to just believe in people willy-nilly. I dunno, I don’t think it’s cynical to expect people to prove themselves before you start putting your trust in them. Is that cynicism? Or just pragmatic? Either way, let’s just hope Tohru never bumps into a friendly scammer. Like kindness, they also come in all shapes and sizes.

— The next morning, Tohru is in the kitchen making rice balls with a big smile on her face. Well, it’s a good thing she didn’t catch a cold.

— When she spots Kyo, she comments on him being up early as always. Unless he’s running around the house like a headless chicken at 5am in the morning, he doesn’t seem like much of a cat to me.

— Kyo tries one of the onigiri and immediately spits it out. He finds the chive filling to be rather disagreeable. Now, I can’t exactly blame him for that. After all, cats shouldn’t like anything from the alium family.

— Apparently, he’s naturally good at making rice balls. But when Tohru tries to compliment him, it just comes off as silly. I can’t say I disagree with him here. C’mon, it’s a rice ball. I almost wanted to say that it came off as patronizing, but I should know that a heroine like Tohru wouldn’t have a mean bone in her body. She’s the sort of person to get bullied and just take it.

— In any case, he tries to brush off the compliment ’cause,  y’know, inferiority complex. He can’t recognize his own self-worth. As a result, Tohru gets triggered into boring us to death again. This time, she tells this corny ass metaphor about how we’re all rice balls. We think we’re boring ol’ plain rice — speak of yourself ’cause I like plain rice — but we all have an awesome umeboshi stuck to our backs. Fittingly enough, I don’t really like umeboshi.

— However, the mood turns sour when Yuki hears that Kyo didn’t like the chive onigiri. He just walks in and starts shoving the onigiri down Kyo’s throat. I mean, yeah, is Kyo a bit rude? Yes. Could he have been nicer about it? Yes. But what a dick, man. This is why nobody likes rats.

— But despite all their endless bickering, in some dark corner of Tohru’s mind, a tiny fujoshi thrives.

— Right before the credits roll, Tohru finds a girl waiting outside the house, and she’s looking specifically for Kyo. Well, at least he was one admirer, right? But knowing these boys, they can’t be content with what they currently have. They desire what they can’t have.