I had hoped that we wouldn’t dwell on Raphtalia’s painful past, but no such luck. Gotta go through the same ol’ tropes no matter what!

— Raccoon girl’s childhood friend was always in love with the Shield Hero of legend, I guess. But when she asks Raphtalia whom she liked, our heroine replies that she loves her dad. That ends up being true in more ways than one. I dunno, sounds to me like the author really digs emotionally scarred girls with daddy complexes. After all, raccoon girl ends up picking up her best friend’s mantle and loving the Shield Hero.

— Back in the present, we go through the same boring nonsense like, “Do you think I would forgive you?! How can you beg for your life after all you’ve done!” Yawn. Y’see, Fat Evil is a bad slave owner because he hurts them! You can still be a good slave owner like Naofumi, though! He just loves his little girls so much!

— And as the shit cherry on top of the shit sundae, Naofumi eventually talks his slave girl down. He tells her that killing Fat Evil wouldn’t give her closure. Pfft, yeah, ’cause that’s what our main concern here. Not the fact that he’s still evil. Not the fact that letting him live means he’ll just continue hurting others.

— There ya go! There ya fucking go. Can’t enact justice ’cause it’d just make her the “same” as him. Be as generic as your heart desires!

— In the end, Fat Evil shows his true colors by attacking Raphtalia shortly after she had shown him mercy. He ends up falling out the window and to his death… or does he? 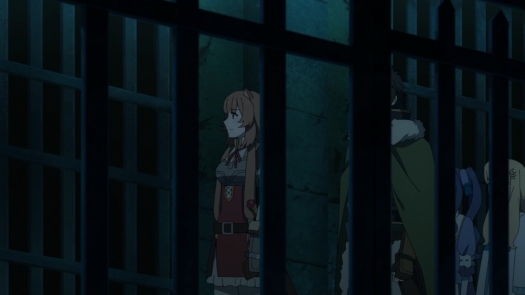 — But before we can answer that question, it’s time to go traipsing around in the past! Granted, I don’t care for any of the characters in this story, so I’m obviously biased against them. But good lord, Raphtalia’s past is just so boring. Hey look, I lost my parents, but we villagers can band together and rebuild what we’ve lost. We’re good wholesome people from the countryside! Yaaaay. And here comes the one dimensional bad guys. Oh nooooo. They also attacked immediately after Raphtalia tells everyone to keep smiling. The timing couldn’t have been more perfect. It’s almost as if this situation was… contrived.

— Raphtalia even ends up giving her party a slow and meandering tour of the exact place where she was imprisoned. They really want to milk her tragic past for all that it is worth. See?! This isekai isn’t just about some dumb escapist fantasy about running around with lolis! It’s got emoshuns! Tragedy! Heartbreak! Dead lolis! I dunno, maybe this shit would tug at my heartstrings if I was still a dumb, sheltered teenager.

— Eventually, she stumbles upon another one of her former childhood friends. The guy doesn’t recognize her, of course. She’s all physically grown up thanks to EXP!

— But eventually, she finds a skeleton that could only belong to her precious Rifana-chan! Wait, how do you even know it’s her?

— Seeing her dead friend’s skeleton, Raphtalia starts to despair and lose hope. She couldn’t make it back to Rifana in time, so blah blah blah, it’s so sad and whatever. So Naofumi steps in and tells her how she’s given him strength. As you can tell, I’m just trying to move on as quickly as possible, because nothing here interests me. Nothing here adds any interesting depth to any of the characters or their backstories. Raphtalia’s tragic past is as deftly written as trying to carve Michelangelo’s David with a chainsaw.

— Guess what? Fat Evil’s still alive. All that fat must’ve cushioned his fall. And this time, he ain’t holding back! Fat Evil proceeds to break the seal on some horrible monster that was sealed away by former heroes.

— And it’s just a dinosaur.

2 Replies to “Tate no Yuusha no Nariagari Ep. 15: Generically tragic”