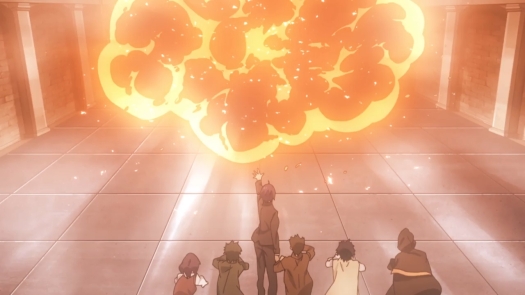 23 straight minutes about how Shin is practically a weapon of mass destruction. Compared to him, other people might as well be using slingshots. This is almost like that stupid Irregular show except the main character isn’t an emotionless robot.

— The episode starts off by formally introducing us to the two girls that Shin had saved at the end of last week’s episode. The redhead is Maria, which is simple enough. The blue-haired girl is obviously Sicily von Claude, but the subs have the strangest take on her name. I’m just gonna call her Sicily.

— Needless to say, Sicily is already in love with Shin. Luckily for her, the feeling is pretty mutual.

— On a side note, Maria hasn’t fallen head over heels with the main character yet, so who knows? Maybe this will be the rare isekai that doesn’t also double as a harem anime.

— Y’know, it’s an anime where the main characters go to a fancy academy, so of course, our hero has to run into some arrogant jackass who thinks he can boss people around because he’s part of the upper class. Just the same tired subplots over and over.

— The blond guy in the middle is none other than the prince of the entire kingdom. But you wouldn’t know it at first glance, because they all dress so shabbily. I mean, it’s probably just the bad animation plus art direction, but man, don’t you think these kids could do a little better than sloppy, untucked shirts?

— We get a first taste of just how massively Shin outclasses his peers. During the entrance exams, dinky spells like this tiny fireball is pretty much all that the other kids can manage. As for Shin, he nearly destroys the room that they’re in.

— Out of nowhere, Sicily comes to Shin with a problem. Surprise, surprise, the asshole harassing her is none other than the same noble who had butted heads with Shin previously. I just feel like this is coming out of left field, because we haven’t remotely developed any of these characters or even the subplot. Plus, it just panders to the neckbeards in the audience who fantasizes about stealing away some dude’s girl.

— A pair of generic nobodies. I’ll get back to them in a bit.

— Wanting to protect his future waifu, Shin asks his grandparents if he could upgrade the enchantments on Sicily’s uniform as well. We wouldn’t want that noble to do anything to her! Well, Melida starts playing hardball by insinuating that perhaps the girl is trying to take advantage of our innocent Shin!

— Man, those anime camera angles sure are peculiar! 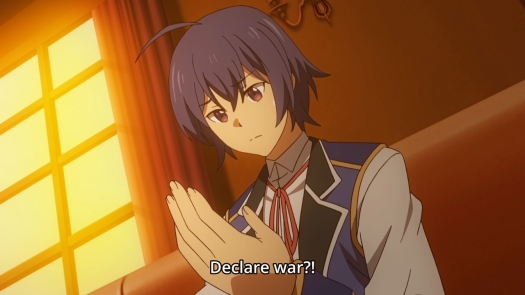 — Alright, so Shin can proceed and upgrade Sicily’s enchantments! This is the part that cracks me up. The king happens to be here… along with his son and those two generic classmates that I pointed out earlier. The king reminds us that countries would go to war over Shin’s talents, so please don’t let anyone know about you learned here. SO WHY IS EVERYONE ELSE HERE?

— Not only that, the only reason Shin is even upgrading Sicily’s enchantments is in order to protect her from that noble’s retaliation. The king literally just heard about the situation! Doesn’t he have the authority to protect her? Gosh, I dunno, relying on Shin all the time is a bad idea. But gee willikers, we just don’t have any other solutions!

— Then right before the episode ends, we learn that Shin had gone and upgraded nearly everyone’s uniforms (Maria passed up on the opportunity). This is national grade stuff! This can’t leak out to the public! Shin, you gotta have more common sense! Aaaaaand none of that shit ends up mattering. The best part is how we don’t even know a goddamn thing about those two generic nobodies — has Shin even said more than a couple sentences to them yet? — but they somehow get included in this whole brouhaha. I’m sorry, but who writes this shit?

— Speaking of common sense, Shin spends the rest of the night showing his buddies how cool he is.