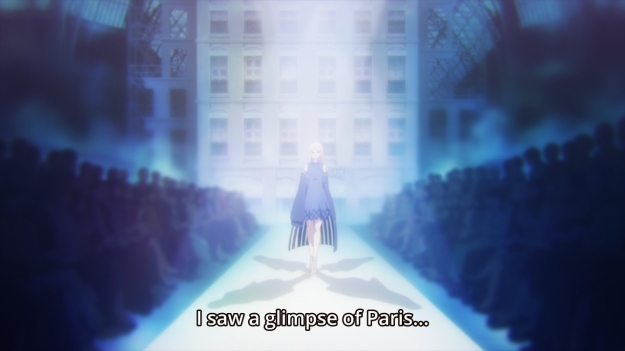 There’s a moment in the episode where our heroine waltzes into an audition and steals everyone’s breath away. They had wanted to discourage her. She’s too short. She has no talent. You can’t walk down the runway at Paris Fashion Week if you can’t showcase the clothes. And you can’t showcase the clothes at 5’2″… I assume. I mean, I wouldn’t know. But once Chiyuki stands before them, everyone is speechless. And honestly, I don’t know how to process this scene. Frankly, I don’t know a damn thing about fashion. I know even less about models. As a result, I can only accept at face-value that Chiyuki is doing something really, really amazing. Well, I hope she is or we’re in for a really short (no pun intended) story. But yeah, that’s what this show is basically about. Our short model — only 5’2″! — not only wants to be a “hypermodel,” she wants to do it for her father’s company. Hell, the company is even named after her. Chiyuki also pairs up with Ikuto, one of her classmates (what are the odds!). He just happens to have an immense talent for designing clothes despite being a complete amateur. The outfit he designs for Chiyuki not only lets her ace the audition, but it goes viral thanks to (sigh) an influencer. In the end, not only is Chiyuki one step closer to realizing her dreams, Ikuto is recruited by Chiyuki’s father to work on a project. None of this seems remotely realistic or practical. Common sense tells me to be cynical. But this is anime where all your wildest dreams can come true. Anime loves to hold onto childish yearnings and never let go. That’s not a knock on the medium per se. It’s just how it is. We’re not here to watch Chiyuki and her equally fashion-obsessed partner Ikuto give up. We’re here to watch them fulfill their dreams no matter how silly they may seem. I just have a few stray thoughts… 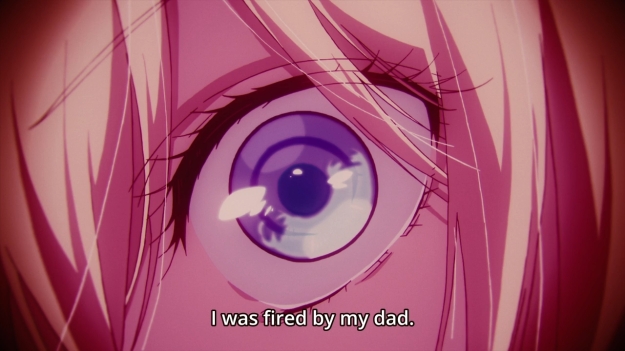 I just wonder if our heroine’s father could’ve done more to help his daughter out. Well, let’s not kid ourselves. Of course he could’ve done more for her. And I don’t just mean on the modeling front. Did he really just fire her before the series began and left it at that? Did he never try to encourage her to develop an interest in, well, anything else? Granted, some kids are stubborn. Some kids truly have the tenacity to grab hold of a dream and never let go. And I’m not trying to say that you should crush their dreams. Rather, kids should know that there are several paths in life to take. I think most of us bounce through several interests. I wanted to be a botanist at one point. A botanist. Why? I dunno, plants are neat? And even though you think you’ve chosen your direction, it’s never permanent. I certainly didn’t go to college thinking that I’d be a programmer one day. I guess I’m on a bit of a tangent. After all, Chiyuki isn’t going to give up and we’re not supposed to root against her. The first episode is all about her realizing that neither she nor Ikuto should give up just because life has stacked the odds against them. And so they will strive on. They must strive on. And we must equally be inspired… sure. And I’m also sure that I’ll feel those warm, fuzzy feelings when I see Chiyuki walk down the runway in Ikuto’s clothes. But before that happens, I just wonder. I wonder about the girl and her relationship with her father? What does it mean to be a father. What does it mean to be a supportive father? Do we try to enable our kids’ dreams as best as we can? Or do we do whatever it takes to protect them even if means hurting them in the short-term? Do we take a more broad-minded approach so that they don’t pigeonhole themselves? Plus, does success have to be so binary? Writers may aspire to be like J.K Rowling, but that doesn’t mean you can’t be happy with a tenth of her success. To bring this back to the anime, does Chiyuki have to reach the Paris Fashion Week? And does she have to work with her father’s company? Luckily for me, I won’t have to answer most of these questions. I certainly don’t ever plan on having kids. 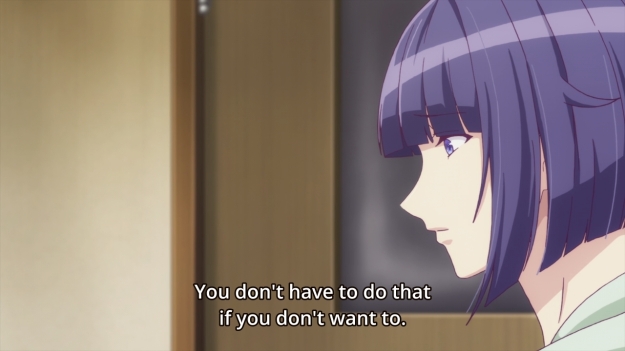 My last thought is kind of irrelevant in the grand scheme of things, because again, Ikuto is ultimately recruited to design clothes for Chiyuki’s father’s company. But I wasn’t fond of his initial idea to give up on higher education. Y’see, he thought he had to get a job straight out of high school in order to help his sisters realize their true potential. This struck me as… well, this probably sounds horrible but somewhat selfish. That sounds crazy, right? He’s actually sacrificing his own chances for his sisters. Isn’t that antithetical to selfishness? Well, I have to wonder if his sisters would want this? If they knew what he is planning, would they be happy? It’s tempting to laud one’s sacrifice for the greater good, especially in cultures that value collectiveness and community. And certainly, I have a very Western-oriented mindset where individualism is put at the forefront. But I’m also trying to imagine myself in Ikuto’s sisters’ shoes, and I can’t imagine being happy knowing that my brother is choosing to forego college without even having a proper open discussion with his family. One of his sisters know that he intends to get a job, but she doesn’t really know why he’s doing it. And even with good intentions, I don’t think he should be a martyr. More importantly, I don’t think he should rob his sisters of their say in the matter. ‘Cause that’s what sacrifices tend to do. When people sacrifice a bit of themselves for you, you find yourself in a position where you can’t even choose to be mad. You feel like you can only be grateful or you’ll look like a spoiled brat. Perhaps this is my Western-influenced penchant for individualism speaking, but at the very least, Ikuto should not have made the decision to forego college on his own.

But again, this is all for naught because the kid got hired to his dream job anyways.

(So fun stuff: as kids we have growth plates at the ends of our long bones. And as long as we have them, there’s a chance that we can grow taller. But around a certain age — which varies for boys, girls, and just every individual in general — these growth plates can no longer be found on x-rays. Essentially, they have mineralized and become bone. At that point, you have to accept that you’re not going to get any taller. I know height is often a big deal especially when it comes to attraction, but dudes in their 20s taking HGH are more than likely just throwing their money away. What does any of this have to do with Chiyuki? Not much other than that she got hella unlucky considering her father’s height. Maybe her mother, whom we haven’t met or perhaps will ever meet, is really short.)