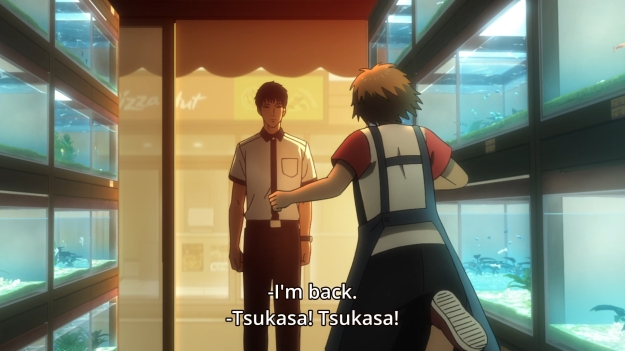 Pet is really hard to love. It really is. For me, it comes down to the main characters. They’re not driving the story in a way that I find appealing. For instance, Hiroki has the mental maturity of a child. He’s sulky, clingy, and just plain reckless. For a bit of context, Tsukasa took his pet’s suggestion to heart and opened up a store for the two of them to run — a store that sells pet fish. When a woman’s boyfriend acts like a bit of an asshole — he had suggested buying a few guppies to feed to his turtle — Hiroki instantly alters the woman’s perception. Maybe he’s offended because his image is a goldfish. Either way, the woman now finds her boyfriend incredibly unattractive. That’s that, right? Well, when she returns the next day to apologize, she also offers to buy a 300,000 yen arowana. Clearly, this is an unintended result, so Hiroki frantically refuses service and closes the shop. Like a child, he acts without any consideration for the consequences. I guess in theory I’m supposed to want to know more about Hiroki’s backstory, i.e. what made him this way. But honestly, I don’t. I just find the kid annoying so I don’t care about him.

I can’t say much about Tsukasa either, but it’s not because he’s annoying. It’s more that the story is still keeping most of its cards close to its chest, so Tsukasa’s personality and aims haven’t come to light. We know that he’s a calm individual. We also know that he is perhaps the person pulling the strings behind the scenes. But there isn’t really much else to say about Hiroki’s partner. Like the previous two episodes, the main thrust this week is still the content of some random person’s memory. I say random because I highly doubt we’ll ever meet Inui again (they’re probably dead). And like Kenji, Inui just isn’t important in the grand scheme of things. Nevertheless, the vast majority of the plot this week is about them. All about their abusive childhood. All about how they were forced to be overly feminine by their deranged mother. All about how that same mother sold them to pedophiles for money. And last but not least, all about how they just wanted some sort of male-slash-fatherly approval. This is a very male-dominant anime. We have yet to meet a single woman who plays even a supporting role. But I digress. My point is that I’m not sure what I’m supposed to care about.

If I had to be charitable, I guess the overarching story is trying to slowly build itself up, allowing us to stew in our many questions. Who are they really working for? What’s the end game? Where has Hayashi been this entire time? I mean, to the show’s credit, it’s one of the few anime series at the moment that doesn’t bombard the viewer with exposition. And while we’re waiting for the slow trickle of information, we’re supposed to entertain ourselves with these vignettes in the meantime — these intimate glimpses into random people’s hearts. First Kenji and now Inui. But in practice, the show’s losing me, because after three episodes, I just don’t see the point. Pet is being too coy with the story that it wants to tell. I’m not interested in seeing these guys go around and fuck with people’s minds, but that’s all that is happening right now. I get it, you have memory operation powers. Now what? Again, what’s your point? Right now, I just feel like there’s nothing to tie these events together other than that Tsukasa and friends are getting their marching orders from somewhere, but that’s so goddamn vague. 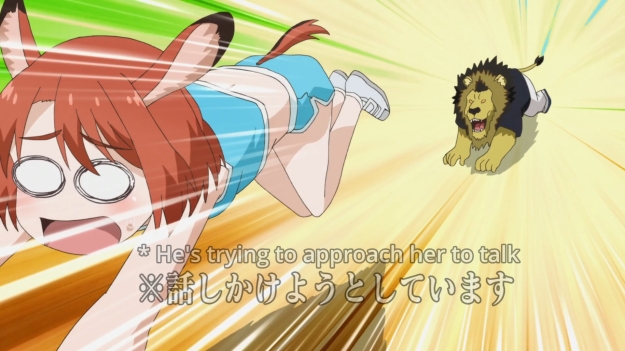 The first half of this episode is all about how some lion is in love with an impala. No, really. The lion has its own harem, but it seems like this isn’t his choice. The lionesses are just attracted to his mane. His first and only choice has always been some long-jumping impala. There’s some stupid bit where another lion tries to steal the first lion’s harem by holding the impala hostage, but none of this is worth talking about. Anyways, the first lion eventually shaves his mane and finds the courage to speak to the impala. He gets his girl, but it’s like… c’mon, do we really gotta go there? I, uh, hope she never ends up in his stomach (though I’m sure that’s somebody’s fetish). Unfortunately, I don’t know any fun facts about impalas. I know there’s a shitty car named after them, but that’s about it. As for lions, did you know that a tiger would totally fuck a lion up? On the other hand, lions would defend their territory in packs. Apparently, tigers are more solitary.

Alright, back to the stupid naked mole rat. Because the naked mole rat’s natural inclination is to be, well, naked, they think everyone else is shameful for wearing clothes. Look at you people being all dressed up and covered in plant-based fabric! How utterly lewd! Eventually, the queen naked mole rat (apparently, this species is eusocial) goes to confront the Cooking Club. She initially tries to disband them, but the human girl claims that they’re just here to cook. You can tell how invested I am in this series considering how I can’t remember anyone’s names. Anyways, the naked mole rat then tells the human girl to kick out the non-human members to prove that they’re not trying to form a harem. This is when her subjects, i.e. the male naked mole rats, come to the club’s defense… and that’s it. That’s the resolution to the conflict. Pretty boring, huh? So let’s spice this up with a fun fact: like the koalas, they also eat poop. Dogs are known to eat poop too. So uh, yeah… what’s with the main character’s harem? 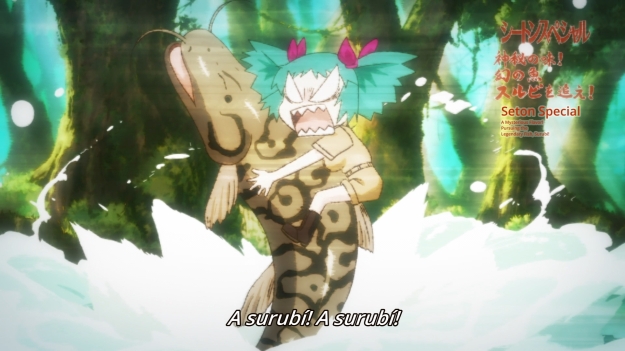 By the way, koala bears are supposed to be herbivores, so this is kinda…

…that’s right, we don’t have any fish people! Why are we discriminating against the fish folk! Ah well, who cares?