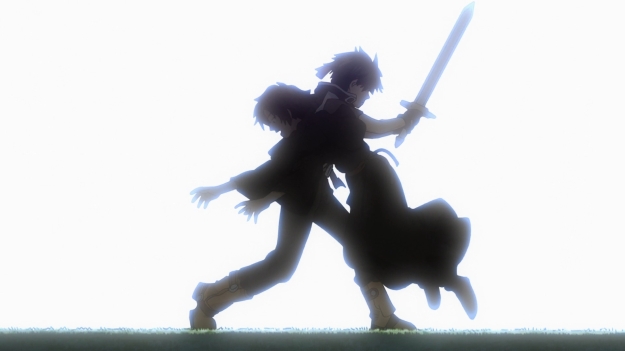 I can’t blog this show, man. I thought the whole Bloody August conflict would take up a good chunk of time, but it’s ultimately wrapped up in only three episodes. Childman kills Bloody August, a.k.a. Azalie, but the former was the latter and the latter was the former! So then Orphen confronts Childman, a.k.a. Azalie, the next day and cuts her down. Is this the end of Azalie? Nope. He uses the magical sword to turn her back into Azalie… and that’s it? She tells us that she’s going to get her time back… and that’s it? Both Childman and Azalie should’ve been major players in this arc, but three episodes don’t afford us a whole lot of time for any sort of meaningful development. As a result, they have next to no characterization; their motives are threadbare. You get a few sentences and that’s it.

For instance, what was Azalie trying to accomplish when she screwed up and turned into a dragon? She tells us she was simply trying to become a woman worthy of Childman. Yup, you get a single line. An unrequited love that drives a young girl surrounded by her friends to obsession and perhaps finally madness is encapsulated in a single goddamn line. I also have no clue how Claiomh and the two dwarven brothers figure into this whole mess. They’re just there, I guess. This is what happens when you try to wrap up an entire arc in three episodes. Everything is so half-assed. I’m also faced with the realization that the rest of the arcs will probably be just as rushed and uninteresting. It makes me wonder if I really want to keep going.

So I’ll cut this post relatively short and start wondering about what I should do next. First, I could always tough it out and finish the rest of this series. After all, unless I somehow catch up on 100+ episodes of Black Clover, my Tuesday schedule is completely barren. There’s nothing else currently airing that I would really consider watching. That’s option number one. But here’s an idea that I’ve been toying with for the past few restless nights (eh, I have trouble falling asleep): it’s been so long since I’ve watched some of my so-called favorite anime series that they might as well be new to me.

Take Serial Experiments Lain, for instance. I haven’t watched a single second of that show in over ten years. I sorta remember how it begins: a dead classmate messages Lain that she’s actually still alive in the “Wired.” I also vaguely remember how it ends: Lain destroys a false God. But everything else in the middle? Just one hazy cloud of half-recollections. I am also curious if I would still like the anime today. Maybe I can use my Tuesdays to do some sort of “Blast From the Past” feature. Go through Serial Experiments Lain’s episodes one by one, then do another show that I haven’t seen in over a decade… like Neon Genesis Evangelion, Cowboy Bebop, etc. That’s option number two. Is there a third option? Well, I could always be lazy. I could always not do anything and give myself a free day from blogging.

Hm, I’ll keep thinking about it. I’ll decide by next Tuesday. If I do write up an older show, it’s definitely going to be Serial Experiments Lain first. After all, it was my gateway drug to anime.

4 thoughts on “Majutsushi Orphen Hagure Tabi Ep. 3: Thinking about what to do next”