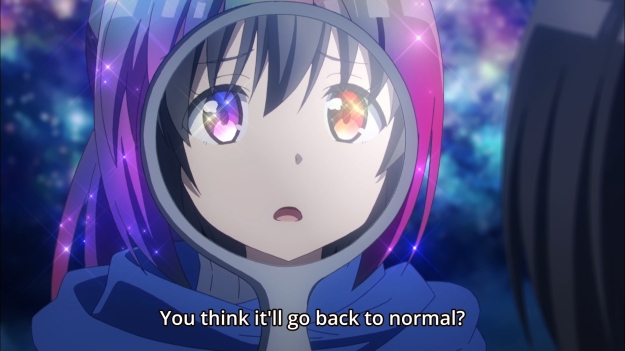 Who needs character development or a plot when we’ve got heterochromia! Alright, time to relive my MMO experiences by watching bad anime again.

— Oh no, here comes the nerfs! It would’ve made no sense if the developers sat on their butts and did nothing about Kaede dominating the first event without even moving from her initial spawn location. I still think they could’ve patched the game sooner, though. Sure, every release goes through a period of regression testing, but when something arguably breaks the game, you expedite that process.

— Also, gaming and snacking is a fast way to destroy your body. Ironically, I’m in way better shape now than I was in high school or college, and I can attribute that to MMO gaming or the lack thereof. I still play a ton of video games these days, but you can pause in offline games. It’s not that I couldn’t go jogging back then, but with MMOs, there’s always the feeling that you’re missing out or falling behind if you’re not constantly playinig. And honestly, this is exactly what the devs want you to feel.

— It’s never fun to get nerfed, and this is especially true in games with unique builds like New World Online. It’s not so bad if you can easily respec (i.e. rebuild your character), but I’m not sure if this is a thing in this game. I remember when Faith builds were really powerful in Dark Souls 2, but a patch just completely wrecked it.

— Risa points out, however, that these nerfs aren’t a total loss, because Kaede will now be able to do damage. Maybe Risa also won’t have to carry her BFF everywhere. Hell, these nerfs might even be a net gain in the long run.

— Inane MMO discussion time: this reminds me of how FFXIV’s tanks are just slightly weaker damage dealers. It’s the same with healers, actually. Everyone’s encouraged to pitch in and do some sort of damage. Tanks in FFXIV essentially do half the damage of an actual damage dealing job, and healers are just slightly behind them. This is a bit of a departure from other MMOs where tanks are told to just focus on tanking, and healers are told to just focus on healing. For some, this destroys the specialization that they crave, i.e. “I want to heal, not be a damage dealer who tosses out heals every once in a while!” But for others, it’s fun to juggle two different tasks, i.e. doing damage and keeping the party alive at the same time. Personally, I have no preference as long as the game is fun to play. And the problem with FFXIV is that both tanking and healing are completely brain dead. This is why I welcome the ability to do damage. Otherwise, I’d be bored out of my mind.

— In one store, Kaede spots a skill that she can utilize, but she has to buy the scroll for it first. Boy, buying spells in FFXI often left me broke. I actually created a new character in FFXI a couple of months ago and leveled red mage up to 99. Do I have all of my spells for the job? Nope! Do I even have half of the spells for the job? Nope! It’s expensive, man! On the other hand, you “learn” every skill or spell in FFXIV via leveling or job quests. As an adult with a full time job, I guess I have to prefer the latter. I just don’t have the time to grind for money anymore. 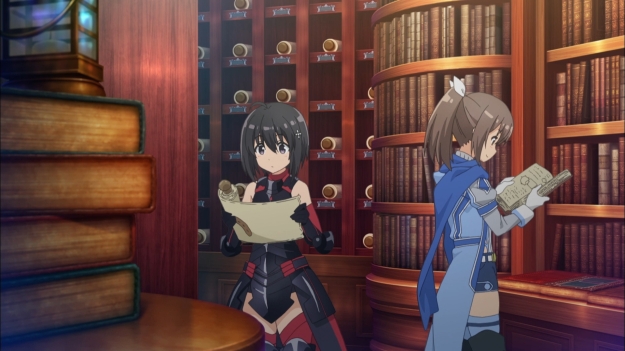 — Plus, despite all my years of playing MMOs, I was never good at being filthy rich. Certain folks always manage to max out their gold in any MMO that they touch. There’s even an infamous guild in FFXIV (they’re actually called “Free Companies” in that game) that has pissed everyone off by buying up 90% of the housing plots. That has never been me. I’m never Mr. Money Bags in MMOs. I rarely craft either, because crafting takes (you guessed it!) money. Maybe that’s why I find Log Horizon so boring. From what I’ve seen, it’s like 95% management and 5% questing.

— I would love to eat in an MMO restaurant, but alas, this is not a thing. After all, you can’t actually taste anything, so what’s the point? Monster Hunter World has a mechanic where those cute cats cook for you. Maybe some MMO can copy this, but I doubt it. It’s extra development time for something that is likely to be deemed unnecessary. This is especially true for games that are continually being developed. Good luck convincing a product manager to waste sprint cycles on that.

— In the restaurant, Kaede and Risa have a quick chat with a couple of guys about the next upcoming event. Hm, we haven’t met a single important male character, have we? It’s a bit surprising since MMO populations are still predominantly comprised of men. This is slowly changing, so who knows? Maybe by the time we get VRMMOs, the demographics will be closer to 50/50. In this case, these anime stories might actually be accurate.

— Oops, I was wrong: Risa still has to lug her BFF around.

— So like last week, we just get to see our two friends do stuff. This time, they decide to explore a haunted forest much to Risa’s dismay. There’s always at least one character who is a scaredy-cat. If this was a Silent Hill MMO or something, I could understand being creeped out, but these zombies look so cartoony…

— The two girls eventually come across an NPC writhing in pain. How do you tell the difference between an NPC and a player, though? In actual MMOs, nameplates are turned on, and NPCs will have a different color nameplate. I’m not sure how it would work in New World Online.

— Risa ends up healing the NPC until he’s no longer in pain. As a result, he gets to pass on into the digital afterlife? Alright then…

— In order for other players to have the same experience, that NPC is going to have to respawn back in his original position and writhe in pain again. It’s only fair! I kinda hate these quests, though. If you play on a crowded server, you end up standing around waiting for the NPC to return. That’s no fun. Some games get around this by “instancing.” When you enter a dungeon, you create an “instance” of that dungeon. This way, your questing won’t interfere with anyone else’s questing. A lot of MMO fans balk at this, because it takes away from the feeling that we all inhabit the same world. But again, I don’t have time to just sit on my ass and wait for an NPC to respawn.

— Also, I wouldn’t normally expect a swashbuckler to be able to cast healing spells, but New World Online seems like the type of game that will allow players to create any sort of build they want. I guess Risa is some sort of magical pirate…

— What’s the point of this scene? Nothing. It’s just a pretty moment for our two BFFs. Plot? What’s that?!

— I wonder if this random item they pick up will come up again later in the series.

— In the second half of the episode, the two girls finally decide to tackle a dungeon that bars their way to the “second level.” This MMO has a weird vertical structure where you can only reach a new town by ascending to the next “level.”

— This giant deer boss reminds me of fighting Sif or something. A Souls-like MMO might be fun…

— Kaede gets knocked out mid fight, so Risa ends up beating the boss by herself. I can’t really tell if these bosses are supposed to be hard or not.

— They finally reach the new town. Kaede also bumps into Iz, the armorcrafter, so our heroine finally gets her new shield. I guess there’s no mailbox feature in this game. Plus, the shield kinda clashes with her all-black look, don’t you think?

— Then we get another scene where the girls eat and drink merrily because why the hell not? Sure, we had first breakfast, but what about second breakfast? 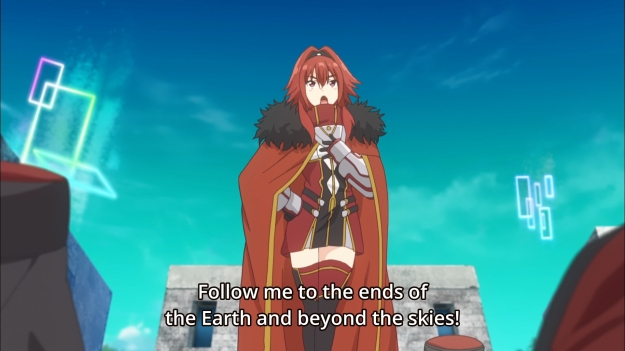 — Finally, it’s time for the second PVP event. Off to the side, we see a redhead giving her guild a fiery and inspirational speech! On paper, this is what we would like to see. But in practice, it’s usually a dude on Discord who’s been up for too many hours, so he sounds tired and monotone. And he’s not giving a speech so much as just telling people what to do. In the background, people are making stupid jokes or just plain not paying attention. But hey, anime is fantasy, so guilds are just like armies and guild leaders are like generals!

— Blah blah blah, gain points, get medals, exchange medals for items. Got it.

— And with that, this week’s episode comes to an end. Like I said at the very top, this show has practically no character development or a plot of any interest. It’s really just Kaede and Risa doing stuff. Hope you like stuff.

4 thoughts on “Itai no wa Iya nano de Bougyoryoku… This Title Is Too Damn Long Ep. 3”