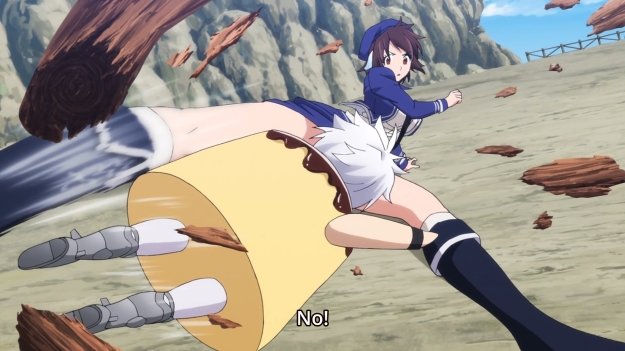 — First, let’s take care of some loose ends. Hina wants to go after Licht, but Nana convinces the poor girl that they need money for the trip. As a result, we see our heroine waiting tables for Nana’s outdoor tavern. If you think this sounds exciting, wait until you see how boring the episode gets.

— Oh yeah, this edgy dude is looking for Licht. He has the power to create iron out of nowhere, I suppose. He uses this ability to force Nana into spilling the beans on Licht.

— If you don’t remember why our hero is wanted, it’s because everyone thinks he has a Ballot. Said Ballot is of course still in Hina’s possession.

— We can now move onto a nearby village that looks totally safe for its inhabitants.

— We know next to nothing about the village other than that there are at least two soldiers here: a ditzy, well-endowed girl by the name of Lynn and her partner Pele.

— Lynn’s heart is as huge as her chest. She’ll drop whatever she’s doing in order to help the villagers. If they’re not in need of direct help, she’s spearheading projects like building a new school for the children. Wow, she sounds like such a nice girl! Does she have any flaws? Not really… well, she’s kind of stupid.

— So here comes Licht… disguised as a flan salesman? I think these legendary aces have lost their marbles due to old age. When you live for that long without any particular goal or aim, your mind is bound to just deteriorate, right? Of course, I don’t actually know whether or not Licht has a goal in life, but look at him! He’s not really doing anything. He’s just goofing off. Maybe he’s been doing this for centuries.

— At first, Lynn suspects Licht to be the criminal wanted by the… uh, government or whatever. I still nothing about this universe, really. Is there a kingdom? A country? An empire? Who rules this land? Who enacts and who enforces these rules? There are soldiers after Licht. That’s really all that I know. But I digress. Lynn tries to apprehend the hero, but he shakes off her suspicion by pretending to be a luckless incel.

— Lynn has a pretty high count of 410. According to her, the number represents the number of people’s she’s helped. Again, this is according to her. And yet, when she was helping both the children and the adults, her count didn’t go up.

— But when Licht shows up and begs for a date, simply holding his hand causes Lynn’s count to go up by one. Uh-huh…

— We thus proceed to watch Pele try to coach Lynn and Licht through a date. Seriously. This entire fucking sequence takes up nearly two-thirds up the episode. I could wave this off if the show was funny, but nope. Eventually, things just escalate until Licht is literally sexually harassing the girl. The sad part is that each time she gets into these uncomfortable situations, her count goes up. It goes up even faster when he has his hands up her legs. So uh, does her number really stand for the number of people she’s helped? Or is it really the number of time she has found herself in a compromising position? ‘Cause if it’s the latter, I feel kinda bad… 410 is pretty goddamn high…

— But like I said, the poor girl is an idiot who’s easily impressed. For instance, when Licht saves her from a fall, she blushes as if she’s falling in love. Then later in the episode, he simply performs the kabedon and she’s ready and willing to become his wife. I wish I was exaggerating. Maybe Lynn has lost her marbles as well. Living out in the boonies can do that to ya.

— Eventually, Licht slips away and that’s it. That’s the episode. Move the story forward? Pshaw. Do some world-building? Puh-leeze. Develop the main character? Stop wasting my time with ideas to improve this anime!

— Sigh, maybe I should drop this show…