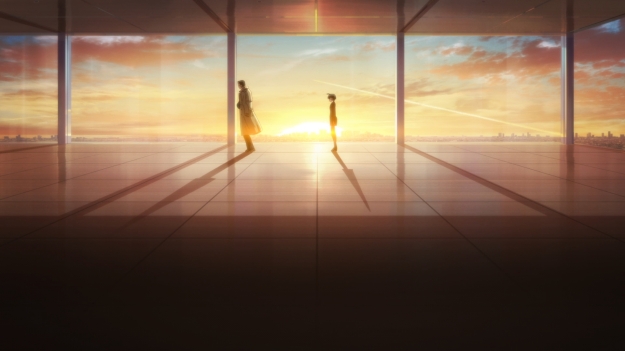 When we last left off, Hondomachi identified Imami as the actual mastermind. Now we can finally wrap up this case.

— Matsuoka is a pretty tough dude. He’s not a great detective, but hey, we can’t have it all.

— Back in Kazuta’s ID Well, the boy calls out to the girl, but she ignores him. She simply asks Sakaido if he has ever had a crush on anyone. Obviously, this has to be Kazuta’s unconscious doing the talking. The boy and the girl can never come together, because there’s a gap between them in real life as well. Their only connection is a tenuous crush.

— Back in the real world, Hondomachi lures Kazuta out by threatening to kill Imami. The guy heroically leaps from the second floor just to defend his “princess.” I guess what I don’t understand is why he would go so far for Imami even though their love remains unrequited. Granted, they are both broken people. In his unconscious, he’s perpetually trying to protect her from a monster. And as for Imami, well… we’ll see later.

— Just to avoid confusion and in case you are unaware, the subconscious refers to brain processes that we don’t have to constantly be aware of. Things like breathing. We aren’t typically aware that we are breathing unless we focus our attention to it. The unconscious, on the other hand, refers to things that our mind represses. For instance, if you were to tell Kazuta about how there’s boy attempting to protect a girl in a floating house, he’d have no damn clue what you’re talking about. Of course, these two terms are used interchangeably by laymen, and language is always changing.

— So this is probably the worst part of the episode: we’ve got two individuals trained in handling a gun, and neither of them are capable of landing a single shot. Hondomachi and Matsuoka are worse than stormtroopers. On the other hand, Kazuta manages to nail Matsuoka with a knife and graze one of Hondomachi’s legs with another one. So there you go: the dude with knives technically has 100% accuracy. 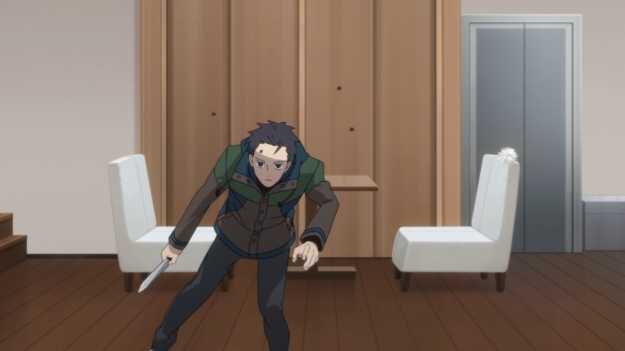 — Then just to piss me off even further, Hondomachi’s last bullet somehow goes through Kazuta’s hole and out the other end without hitting anything. Writers, please. Just because you can… doesn’t mean you should.

— And to prove once and for all that knives are superior to guns, Hondomachi avoids death at the last second by stabbing a lunging Kazuta in the chest. Good lord… stick to superior Nippon steel, I guess.

— Right before Kazuta collapses to the ground, he plants another kiss on Hondomachi’s lips. According to the previous episode, he never did kiss Imami. Well, he would never want to hurt her, so I guess the need to kiss her never came up. He loved her in his own way.

— Hondomachi then kinda reacts strangely to the rest of this incident, but I’ll get to it at the end of the post. It makes more sense to discuss it then.

— In the aftermath, a funeral is held for all the officers who lost their lives. Momoki’s team also find time to discuss the strange recurring phenomenon known as John Walker. They speculate that perhaps there is another Mizuhanome out there — maybe even a prototype Mizuhanome — but of course, they have no supporting evidence for their theories. Nothing but conjectures in the dark.

— Curiously enough, the inventor of the Mizuhanome is missing. The head chief himself also seems kinda shady. The entire project is full of red flags, but because this is the best way to catch these prolific serial killers, they’ve got no choice but to push forward.

— Meanwhile, Matsuoka goes up to the chief and recommends Hondomachi as a potential candidate for investigating ID Wells. It’s clear from his face that he never wanted to go down this route, but the latest case must have been the tipping point. 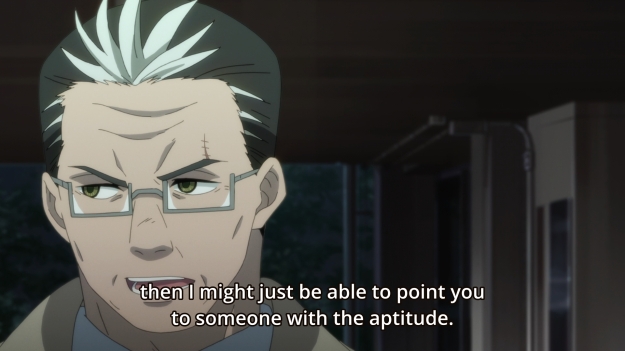 — But now that we have two capable investigators — I know I’m jumping the gun a bit with Hondomachi — what do we expect to see in future episodes? Will the girl and Sakaido be operating in parallel? Or will they be investigating the same ID Well together? I’ll guess I’ll have to wait to find out.

— Elsewhere, we learn that hidden surveillance devices were found in Fukuda’s place. Someone was monitoring The Perforator’s actions. The team immediately suspects John Walker to be the culprit, but he’s just the prime suspect.

— Anyways, Sakaido soon finds himself in Imami’s ID Well. They want to to know where her victims are buried, and I guess you may as well see what you can learn from the woman’s unconscious mind.

— Our brilliant detective walks from train car to train car just to find himself back to his original position. He is on a train to nowhere. In the real world, the team gives us a bit of exposition: not only was Imami’s mother killed by a train, Imami was on that train. So I guess her repressed mind has been forced to watch her mother die over and over, which somehow manifests as a real world desire to watch others die.

— Kazuta is also in Imami’s ID Well, and there is also an insurmountable gap between the two of them. And like before, it is the girl’s choice. Kind of sad… I would pity them if they weren’t serial killers. Right on cue, we see John Walker standing on the outside, watching the train go by. Our detective ultimately concludes that nobody had killed Kaeru. She staged her own murder to show him that there’s nothing here to investigate.

— On the one hand, these two are apparently victims of John Walker. We don’t know that for sure, but this seems to be where the story is headed. They might not have become serial killers if they didn’t have the unfortunate luck of crossing paths with John Walker. But killing is a deliberate, premeditated action. Even if someone messes with your impulses, you are solely responsible for your actions… right?

— What John Walker is doing is akin to putting a gun in his victim’s hands. At the end of the day, they still have to pull the trigger. But if their impulse to kill can’t be ignored, then are they really culpable? I guess that’s where the insanity defense comes in. Before he died, Kazuta certainly didn’t seem like someone who was in complete control of himself. He seemed like a zombie who just acted on… well, impulses.

— In the real world, Imami voluntarily provides the police with all the information that they want. She has no real reason to mess with them. Well, that’s nice, I guess. I wonder where they’re going to stick her. Hopefully not directly across from Narihisago’s cell.

— Imami does, however, want to meet with Hondomachi one last time, but I kinda doubt we’ll get that scene.

— Back in the ID Well, Sakaido breaks down and cries before Kaeru. He has always wanted to save her, but she’s always dead before he even gets there. It’s a Sisyphean task. Like the train he’s on, he’s stuck trying to solve a case that can never end. Everywhere he goes, she is and remains dead. After all, she represents Narihisago’s daughter, doesn’t she? In previous episodes, the team referred to her as a construct of the Mizuhanome, but it’s a construct that Narihisago brought in with him, is it not? He might not believe that Kaeru represents his daughter, but at this point in time and with what we current know, that sure sounds like denial.

— Elsewhere, Hondomachi receives the good news with the chief. Immediately afterwards, she tries to thank Matsuoka for putting in a good word, but he reveals his true intentions.

— I don’t know if Matsuoka’s fears are unfounded or not. I do think it’s a bit of a leap to suggest that Hondomachi somehow enjoyed killing Kazuta. It’s also silly to suggest that she’s a serial killer. On the other hand, her reaction or lack thereof shortly following Kazuta’s death was odd. She almost died and she just took a life. She’s supposed to be a rookie field analyst… and yet, one of the first words out of her mouth was “nice?” She then followed it up by taunting Imami? Hmm.

— I wonder if that plane’s path also overlaps with Hondomachi’s hole… and if it does, why? Why is the studio bothering to do this when it seemingly means nothing?

— Right before the credits roll, Togo tells Momoki that the surveillance equipment found in Fukuda’s house matches the ones found in The Challenger’s home. Alright then… so more links.