I’m kind of frustrated with this week’s episode of Pet.

It commits the cardinal sin of drowning the audience in exposition via conversation. For a good majority of the episode, we bounce back and forth between two pairs of individuals as they prattle on and on and on about stuff. One conversation takes place in a car before moving to the woods. Another conversation takes place in a hotel room. How dull. It isn’t until the episode is nearly over that we start diving into the dream stuff.

So was the exposition worth it? Eh. We finally learn a thing or two about Tsukasa’s past. Just like how Hiroshi is infatuated with him, he was infatuated with Hayashi. But the catch is that there’s always a limit. Hayashi found both Tsukasa and Satoshi when they were young and shared his Peak with them. But the Company would not allow Hayashi to mentor both boys (likely to prevent him from building his own army), so he chose Satoshi. At the time, Satoshi needed more help than Tsukasa. Even if the latter still somewhat infatuated with his mentor after all this time, resentment couldn’t help but begin to fester in his heart.

So fast forward to the present and we see how Hayashi will only show any concern for Satoshi. This confirms it in Tsukasa’s mind that he has truly been abandoned by the man he looked up to. I’m not too interested in Tsukasa’s backstory to be honest with you. I’m more interested in the potential implications of these revelations. It’s probably unlikely, but Tsukasa could potentially lose his grip on Hiroshi one day. Nothing about the human heart is ironclad.

We also learn the exact reason why Hayashi defected from the Company. There was a girl by the name of Meiling whom he tried to help, but the Company took her away before he was finished. As a result, she is now just an obedient, personality-less puppet. Hah. It figures that the one female character who can use an image gets the short end of the stick plot-wise. Speaking of female characters, we still have Jin, I suppose. Satoshi’s tricks don’t seem to work on her, and it looks as though she was attempting to do something to him in return. And like Hiroshi, she also seems to have some affinity for Tsukasa. 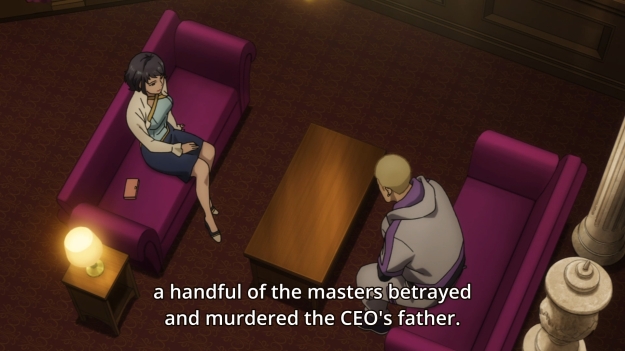 All of the above weren’t so bad. The conversation between Hayashi and Tsukasa were still kinda boring, but at least there’s a personal conflict between the two of them that I can get interested in. On the other hand, we’ve got Satoshi meeting up with Jin, and it’s just one long infodump about how this whole imaging thing started. Something about qigong masters and hypnosis, betrayal, blah blah blah. It’s important information, I guess. But it’s relayed to us in such a dry and boring way.

Anyways, towards the end of the episode, we see Hayashi attempt to alter Tsukasa’s memories, but the latter is too cunning. He’s too well-prepared. Not only has he been trained well, his resentment for Hayashi gave him the drive to become a master of his craft. The cliffhanging ending implies that Hayashi has located Tsukasa’s lock and will therefore start to do some real damage. I don’t expect him to succeed, though. I expect Tsukasa to have seen this coming (maybe he laid a trap). Most of all, I don’t expect things to turn out well for Hayashi in the end. After all, he isn’t a main character; he’s just part of the supporting cast.

P.S. I totally get where Satoshi is coming from: “When you look like this, you get used to flirtatious women poking fun at you.” I feel it…

— It’s Field Day, which is a school wide athletic competition? I don’t think we have this sort of thing in America.

— Of course, Ranka is excited to participate, because winning the event will legitimize their club in the eyes of the entire student (animal) body. 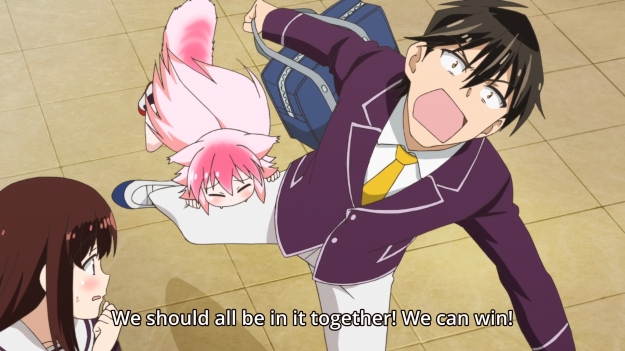 — Jin, however, is a party-pooper who doesn’t want to bother because he’s only here to fuck Hitomi. Usually, the harem lead is somewhat likeable, but not Jin. I just think he’s a jerk even when he does come around and cheer for his team.

— The only person who initially agrees to help Ranka is Miyubi, the sloth. So we get a bunch of slow and random death jokes. Nothing new. Nevertheless, the rest of the club finally agrees to participate when they see how hard these two are working. Well, except for the dumb cat.

— The competition begins and Miyubi falls ill from a cold. To make matters worse, the chimpanzees race out to an early lead by… well, cheating. But of course, no one else but our heroes seem to mind, because I guess chimpanzees should be allowed to use their natural intellect? In that case, couldn’t Jin or Hitomi just whip out a car for the races? Why not? If cheating is overlooked, it’s not really cheating anymore, is it?

— Fun chimpanzee fact: they actually have the mental capabilities to understand the process of cooking. They just don’t do it because they don’t know how to use fire.

— If you’re wondering why we haven’t domesticated chimpanzees, there are
two key factors. First, chimpanzees aren’t like, say, a hamster. They’re
not easily controllable. An aggressive chimpanzee can literally kill an
adult human. Second, certain animals have a herd mentality that just
makes it easier to domesticate them. Take horses, for instance. If you
give them a relaxed environment, they’ll say, “Y’know what, I guess
these pink fleshy bipeds are my herd now.” You’re not gonna get that from a chimpanzee. There was a story about how a woman had raised a chimpanzee from when it was a baby, and it still literally tore her face off.

— Thanks to all the rampant cheating, Ranka starts to despair. This is when Jin finally decides to get invested, so he recruits the donkeys (plus that one zebra girl) to help their team.

— I don’t know much about donkeys, but let’s talk about zebras. They’re also difficult to domesticate! People have tried for obvious reasons (duh, they look like horses). But unlike horses, their herd structure is much more individualistic. Combine this with their aggressive nature and you have an animal that is often too much trouble to tame. I mean, you could do it, but why bother? But that’s where cross-breeding comes in. You just have to settle for, say, a zebroid or a zebra-mule.

— Moving along, Jin wins the only competition that he can win: the long distance marathon.

— Hitomi was gonna participate in the swimming competition — where are all the fishes? dolphins? whales? — but instead, we get this cursed image. Yeesh.

— So it’s up to the sloth to fill in. Somehow, she recovered from her cold in just a few hours.

— Apparently, sloths swim three times faster than they can move on land. The more you know…

— With everyone cheering her on, Miyubi manages to finish her leg of the race. It’s finally Ranka’s turn to bring it home.

— Maybe if the dumb chimp had kept swinging, she could’ve won. But since she turned around to try and cheat, she allowed herself to get cornered by the big, bad wolf.

— So I guess there’s your generic happy ending: 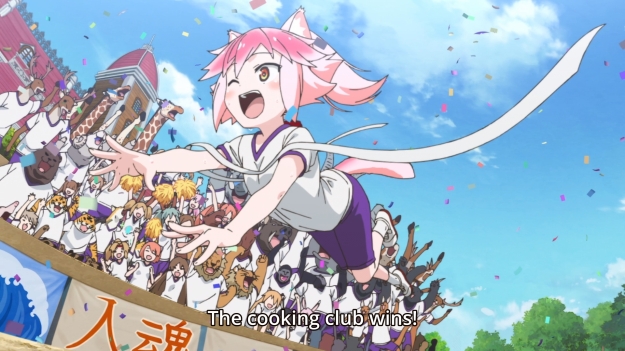 — I feel bad for the voice actress who has to narrate every preview by barking and yelping.