Hell yeah, giant turtle mount. Not only that, it can fly (super slowly)! As for the rest of the episode, it’s just… kinda whatever. But we expected that, didn’t we?

— So when we last left off, the 6th place finisher from the previous event wanted to challenge Kaede and Risa. Yes, past tense. As soon as this week’s episode begins, she says that a 1 vs. 2 is unfair, then runs away. Um, okay.

— I only took this screenshot because Kaede looks silly in it.

— Since I don’t know the new girl’s actual name, I’ll have to call her by her in-game name: Kasumi. It sounds normal enough. Better than Maple anyways.

— Somehow, all three girls end up inside yet another underground dungeons. But this one comes with a very particular gimmick: being chained together means that if one of the girls die, then they all die. Basically, forget about PvP, ’cause Kasume means friend! All cute girls are our friends!

— Am I disappointed? A little bit. I don’t really care who they fight. If you don’t want it to be Kasumi, fine. But man, can we get at least one bad guy? Is that so bad? Maybe the game administrators are the real bad guys. Who knows?

— There’s not much to this dungeon. It has giant snails, but they literally have no HP. In other words, they’re part of the game environment. You can’t kill them; you can only dodge them. 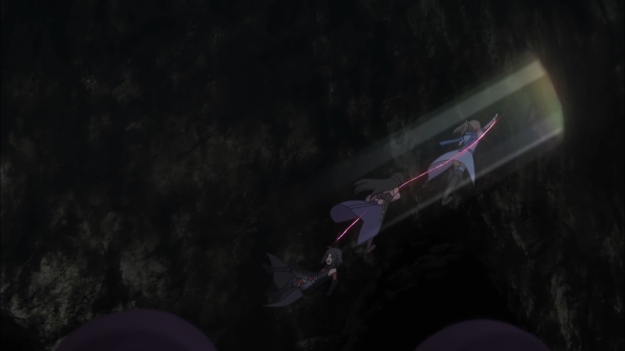 — Eventually, the girls work together in order to escape through this hole in the ceiling. I guess if you don’t have the proper skills to double-jump that high, you’re screwed. Luckily, our girls never fail! And if Kasumi sticks with them, she won’t fail either! Failure isn’t fun! And I just want a fuuuuuuuuuun viewing experience!

— In the end, our Shield Heroine gets another shield, but I think it’s only her third? Shield Hero had way more shields. Step your game up, girl! In terms of game mechanics, New World Online is more old school. In streamlined games like WoW or FFXIV, you don’t really carry more than one shield. There’s no point. You just find the best shield (the one with the highest item level) and call it a day. Usually. I’m not super positive on WoW since I never went through the hardcore raiding phase in it. I did a few casual raids and that was it. But I digress.

In other (and usually older) games, however, new equipment weren’t just upgrades. Some of them were simply sidegrades. One shield is good for physical attack. Another shield might have high fire resist. Then another shield might have high water resist. That sort of thing. So if you were truly hardcore, you would carry equipment for every occasion. Needless to say, inventory space quickly became a headache in games like FFXI.

So which is better? Eh. It kinda sucks to lug around hundreds of situational gear. But at the same time, if everything is just a stat stick, and all you gotta do is find the biggest stat stick, then upgrading can become boring and stale. Older JRPGs were like that, though. You get to a new town and buy slightly stronger gear. Maybe once in a while, you’ll find weapons or armor with unique traits, but that wasn’t always the case. You often had to rely on accessories for any sort of customization. Anyways, the point is that I can enjoy both.

— Ultimately, the girls want to collect 20 medals in order to claim some sweet rewards. Risa tells Kaede that they might have to PvP in order to do so. Our Shield Heroine is too kindhearted to directly fight anyone. She’ll defend herself if you attack her, but she’ll never hunt you down herself. She’s basically a casual who magically stumbled into a hardcore build.

— So for now, Risa will placate her friends. We thus see a montage of them adventuring, adventuring, and adventuring some more. I guess if you want a show that puts a focus on adventuring this is it. But for me, it’s kind of an empty sort of adventuring if that makes sense. If you ask me to think of a really good adventuring JRPG, the first game that comes to mind is Grandia. And part of Grandia’s appeal isn’t just hitting up random locations just for the sake of it. Our heroes set out on a journey in order to go beyond the “End of the World” and into uncharted territories. And along the way, they learn about the world’s origins, its secrets, various lore, so on and so forth. On the other hand, adventuring in New World Online currently doesn’t lend itself to… well… anything. You just do stuff. It’s kinda boring.

— Kanade, a new character who only appears briefly in this episode, points our heroines toward a relatively simple puzzle. Fill the fountains up with liquid, and you’ll unlock a boss fight underwater against a giant squid! And this is kinda ties into what I just talked about. Like why does this fountain exist? Is there any lore behind it? Who built it? Why is it hiding a giant squid? We can’t answer these questions, because there are no answers. The anime doesn’t even care. Our girls just do what they do… because it’s just what you do! 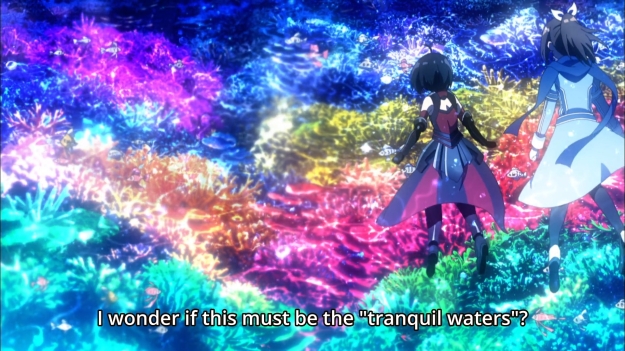 — So they beat the squid and they get more medals. That’s about it, I guess. Oh right, they get yet another pretty vista. Sigh.

— Then we cut to the site administrators griping some more.

— Towards the end of the episode, the girls are quickly running out of time. As a result, Risa volunteers to go out and PvP some noobs on her own. Kaede will just hide out in a cave while her bestie slaughters unsuspecting players.

— And as expected, Risa has no trouble with any of the players that she comes across. Hell, she’s like a nightmare to them — a whirling dervish of twin blades. She complains, however, that she only got two medals for her trouble. I dunno, man. Try picking on someone your own skill level then. I guess Risa is more of an MMO veteran, so she likely chose fights that she had no chance of losing. You can’t expect newbs to be packing lots of loot, though.

— Later, everyone (including Kasumi) hides out in the cave to wait for the event to end. And boy does it end with absolutely no fanfare. I’m sure there are top PvPers out there, but we still don’t know what they look like.

— Kaede has been training the pets in Risa’s absence, and right before the credits roll, she shows off the that giant turtle that I had already mentioned. What about the fox though? Did the fox get any special abilities? Maybe we’ll find out next week.

2 thoughts on “Itai no wa Iya nano de Bougyoryoku… This Title Is Too Damn Long Ep. 5”