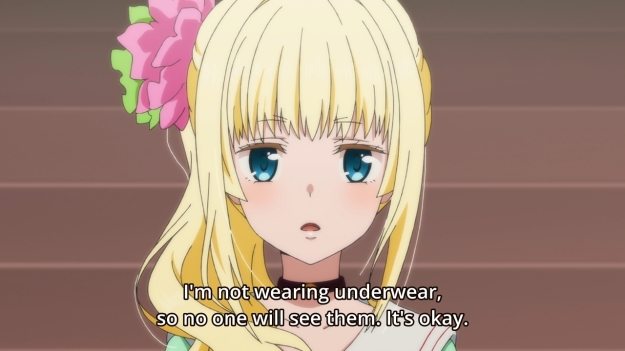 Checkmate, pervs. Alright, it took me a while to get around to this post, but better late than never, right? Plus, I know you guys depend on me to keep you up to speed on Hatena Illusion. So without further ado… 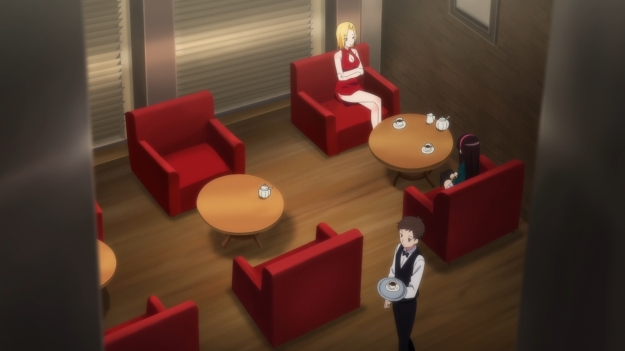 — Sure enough, Hatena goes to meet her evil aunt alone. Evil aunt claims that if our heroine steals this Artifact, then grandma will just patch things up with Maeve. It’s that simple! You won’t believe how this one item will pave over decades of bad blood!

— Obviously, Hatena has an inferiority complex. Not only is Yumemi is more talented (she can make Artifacts like Maeve), she also has pretty blonde hair like their mother. In a better anime, we would explore this complex with sensitivity and deftness. But in Hatena Illusion, we get to see tsundumbass bumble her way into the world’s most obvious trap.

— You’re probably wondering what Makoto is doing while Hatena is getting herself caught. Well, he’s being gallant like always.

— This evil lady can’t just snatch Muff-kun away from Hatena. Alright, fine… how does one go about convincing a young girl to hand over her scarf. Apparently, what you gotta do is wrap the middle schooler up in pink, slimy tentacles and start, uh, turning up the heat. I don’t even wanna know how the author came up with this idea. 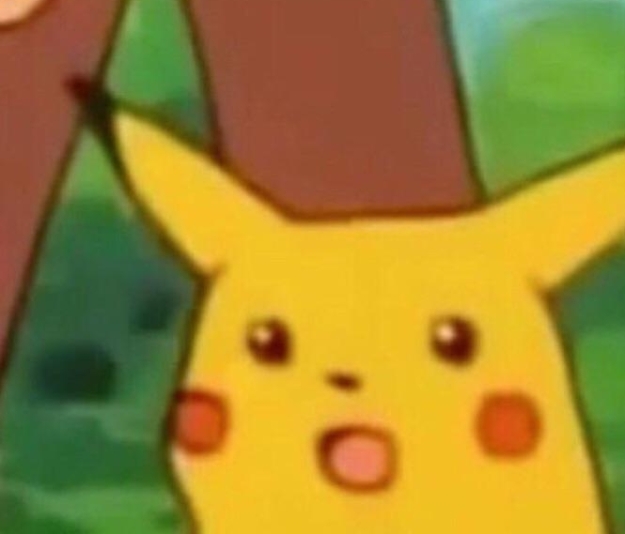 — So like always, it’s up to Makoto to save the day, but he won’t be alone this time. 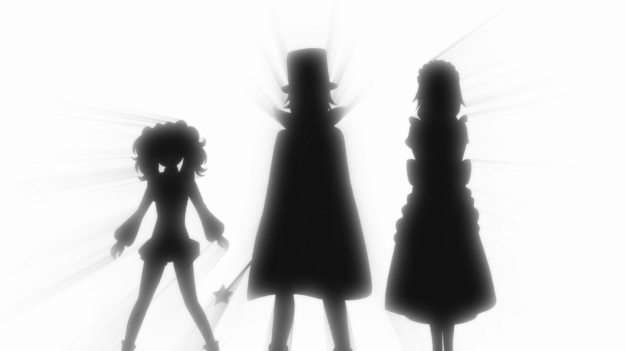 Nope, we’re getting all the warriors! 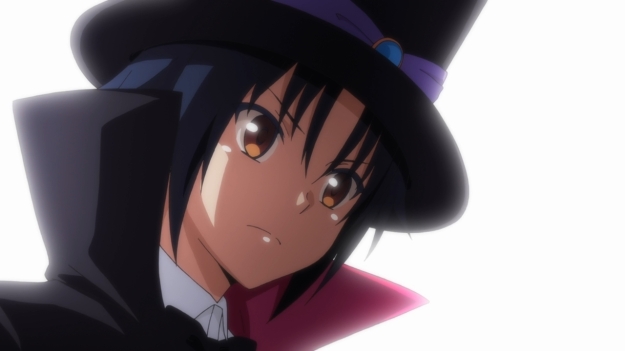 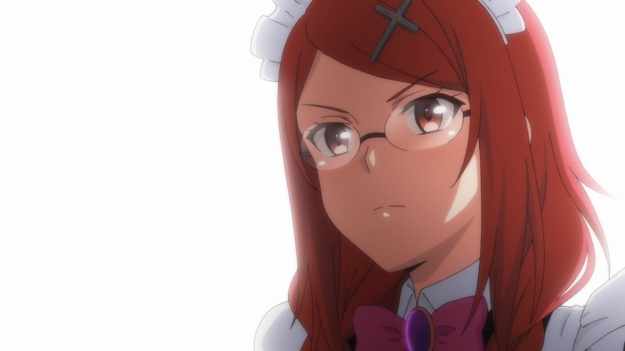 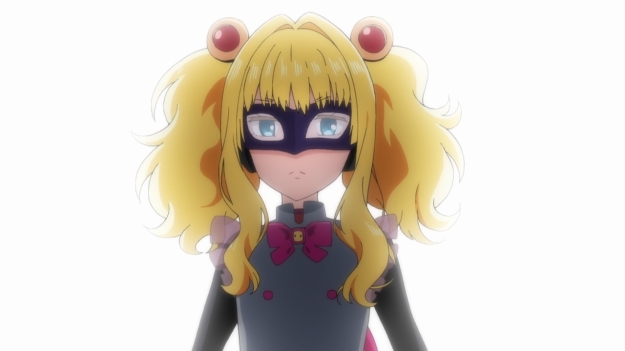 — The maid goes and gets herself caught immediately. Maybe that’s why she’ll forever be a maid.

— So Yumemi has to point out the painfully obvious. Of course it’s the bottle! You guys really needed the little girl to point this out?! Would this mission have ended in failure if she didn’t tag along?

— Ah, let’s just wrap this up. Makoto attacks the lady with the power of crying doves. Man, that boy is just like Hatena’s father… too bold. 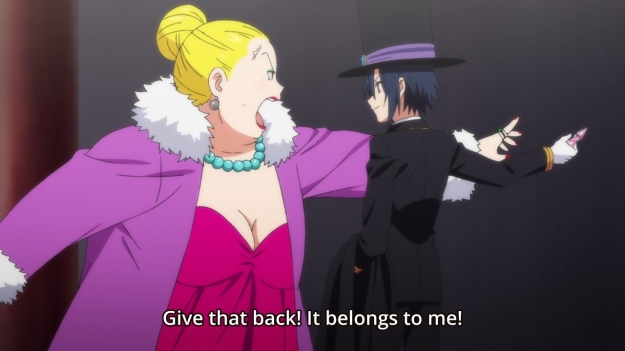 — Welp, that’s it. That’s the end of this struggle. What? You thought this would be a hard fight? Only an idiot would allow themselves to get caught and lose to the evil lady. I honestly have no clue who on earth could be that dumb.

— She came here for you, dumbass.

— At this point, bashing Hatena is like beating a dead horse, but that doesn’t stop Yumemi from getting in on the action. Oh well. 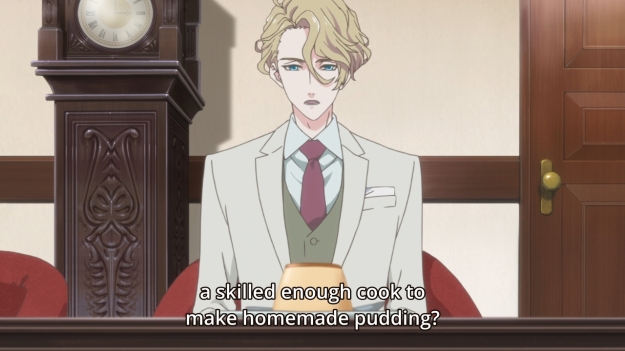 — Flan’s one of the easiest desserts to make, my guy.

— And what’s up with Seigi’s OshKosh B’gosh overalls?

— Alright, let’s just get right to it. The poor woman of the week is a colleague of Haruyoshi. Maybe he has feelings for her, but she’s currently hung up on her suddenly missing boyfriend. All she has to remember him by is this turquoise.

— Yo, if your loved ones are missing, I wouldn’t hit up a jeweler. Just sayin’…

— Richard placates the unhappy woman with… not even a story. It’s like one or two lines about turquoise and that alone does the trick. It’s quite astounding.

— Of course, the story doesn’t end there. Afterwards, we find out that the gemstone in the poor woman’s possession is fake, and she has fallen victim to a scammer. More importantly, Richard takes this very seriously. You’d never expect someone as placid as our blond hero to get so worked up, but for once, it’s his turn to butt his head into other people’s affairs.

— As a result, we see Richard and Seigi hit up Happy Etoile, a joint that not only tries to scam women into buying fake gemstones, its employees will also feed you bullshit about your fortune. But I mean… all fortune telling is bullshit…

— I thought seeing Richard in action would be interesting, but all he really does is piss and moan about how the fake gemstones have bad auras. Not only that, all the employees have evil energy to them or something.

— Nevertheless, Richard raises enough of a ruckus that it scares all the customers away. The employees (i.e. scammers) try to threaten him, but calling the cops won’t do them any good. They would just expose their shady business. Still, I’m surprised that Richard’s antics worked so smoothly. It almost seems ridiculous. 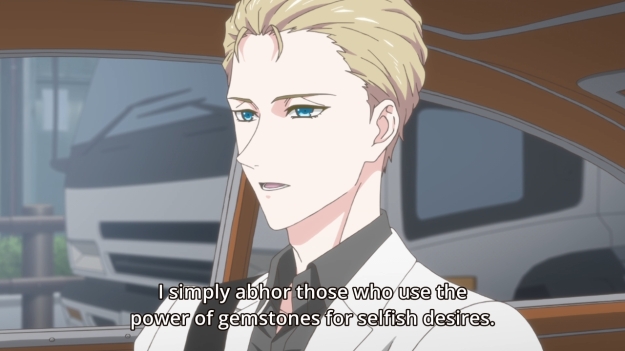 — Does it have to be gemstones, though? Can’t we just hate selfish people?

— Afterwards, Richard stares at a gemstone and reminisces about the good o’ days when he was also a scamming scalawag. Turns out our golden boy isn’t quite a saint. No need to worry, though. I’m sure Seigi would still take a bullet for him. Over Shoko too!

— I only feel somewhat bad for all the lady clients of Richard’s. So many sad stories for them. So many broken engagements too. There was that lady who was a closeted lesbian trying desperately to fit in and love a man . Then there was another one who wanted to buy a gemstone only because she got dumped. And now, we have a woman who just got scammed by someone she fell in love with. Moral of the story? Don’t fall in love, kids. Be a cold, emotionless stone — hell, you could even be a gemstone! — and you’ll never be hurt.

Anyways, here’s your moment of zen: 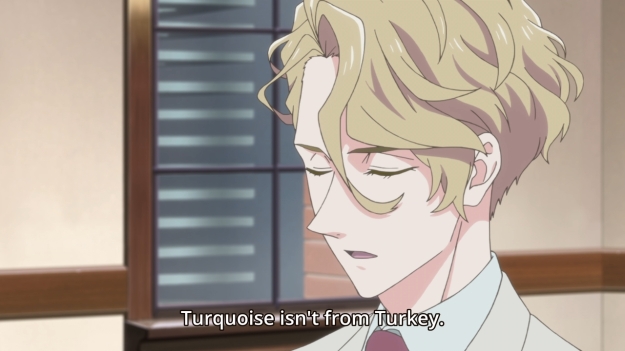 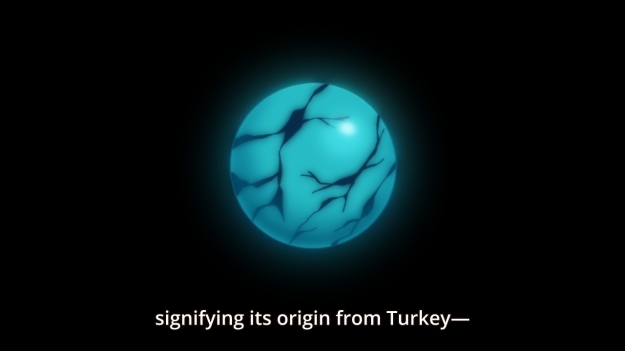 I know what he meant, but I still chuckled.