I guess it’s okay if this arc isn’t all that exciting. I’ll be catching My Hero Academia: Heroes Rising next Friday, so that’ll make up for this… whatever this is.

— Gentle Criminal has one fan and one fan only: the diminutive La Brava. She’s drunk the kool-aid, so she’s all in on this guy even though he’s a pretty lousy criminal.

— Gentle isn’t very popular right now, and it isn’t simply because he’s this kooky fellow who constantly spills his coffee. No, he goes unnoticed because he doesn’t really have a credo worth caring about. He attacked a convenience store chain, because they’re caught up in a minor labeling scandal concerning their… pudding? Right…

— Nevertheless, he has big plans in store for our heroes. In order to gain some notoriety, he’ll attack the upcoming festival. It’s a bit funny. Just a tiny bit. ‘Cause y’know, attacking the convenience store makes him more of a vigilante than a villain. Sadly, he’s not even an inspiring vigilante. Rather, he’s a petty vigilante. And since that isn’t making him popular, he’s decided to shit on a bunch of kids’ parade instead. See, now we’re crossing into villain territory… but then that makes Gentle kinda pathetic.

— Ah, it doesn’t matter. Right now, he’s kind of a joke. Maybe there’s more depth to his character, but knowing My Hero Academia, we probably won’t get his and La Brava’s backstory until they’re both knee-deep in combat. That’s just how this anime rolls.

— Finally, the attention turns to Class 1-A and their plans to hold a concert. This is an opportunity for the supporting cast to step up, so Deku takes a backseat. Still, I feel like the show’s large cast is mostly wasted. When people like Kyoka do get the spotlight, it’s only for something superfluous like this festival.

— Bakugo overhears a couple of students griping about 1-A. We have a pretty large school, but one class seems to hog all of the world’s attention (for better or worse). As a result, I’m not surprised that a bunch of teenagers would react so poorly to 1-A’s good intentions.

— Bakugo takes his message back to his classmates, and in his roundabout screaming fashion, he eventually reveals how passionate he is about their project. If they’re going to commit to this, he wants to “kill” everyone with their sound. Obviously, the kids rally around him once they realize what he’s trying to say.

— So I’ve been thinking a lot about Bakugo and why he bugs the shit out of me. The reality is that it’s not really all his fault. He’s a kid with a shitty attitude, but he’s growing up. He’s slowly making progress. My problem is how the show has handled his character development since the start of the series. It doesn’t really take him seriously enough. When he shows progress, it should be a bigger deal. And likewise, when he’s being a shit, it should also be a bigger deal. But for the most part, his peers have lately just treated him like comic relief, i.e. “Oh, there’s Bakugo blowing his lid again! Haha, what a cad!” When Bakugo is truly being a shit, it’s usually directed at Deku in private, and our hero usually soaks it up like a dirty bathroom rug. And when Deku does stand up for himself, he always has to throw in some lame caveat like, “B-b-but I still hope we can’t be fwends!” It’s been a long time since someone like Todoroki or Tenya took Bakugo aside and was like, “Dude, cut it out.”

— And this kind of reminds me of something: man, everyone is just so buddy-buddy in Class 1-A. They just get along so well! Other than Bakugo being a dick, these teenagers with hormones raging through their veins never seem to clash or anything! 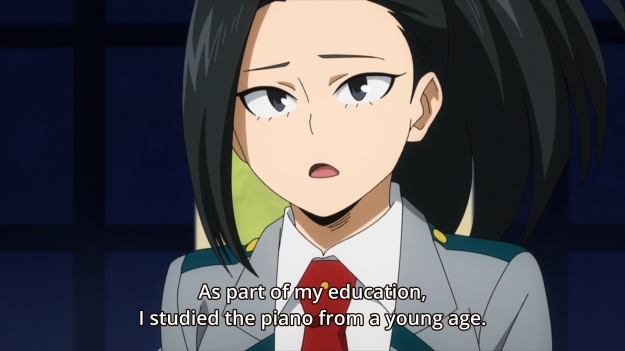 — The middle chunk of the episode honestly bores me. We simply get to see the kids plan out their concert. Y’know, choosing what kind of music to play, who plays what, who’s in the dance party instead, etc. Yawn.

— Meanwhile, these weirdos will put on a light show while the rest of the class dances.

— Like always, Mineta acts like a little shit, but the way the show handles him is even worse than Bakugo. At least the latter is taken seriously once in a while. On the other hand, Mineta is just a complete joke through and through.

— After all the fun and games, Deku takes a moment to be vulnerable with his mentor. It is only ever Deku. It can only be Deku. Sure, others will have their moments of character development. For instance, we saw a glimpse into Eijiro’s past in the previous arc. But what’s silly for me is how his character development is delivered smack dab in the middle of a life-or-death fight. So I’ll go into the fight not feeling one way or another about Eijiro, then all of a sudden, the action gets interrupted for this sob story outta nowhere that I’m supposedly immediately embrace. Only Deku gets to have these quiet moments away from the combat, which slowly builds my emotional investment in him as a character. I dunno, I find it odd.

— Anyways, All Might first teaches Deku how to attack from long range by launching pressurized air. Then he tells the kid that he doesn’t always have to be at 20%. He can start out at a more sustainable level (i.e. 8%), then increase his output to 20% right at the moment of impact. Neat, I guess. We’ll more than likely see Deku use these new tricks against Gentle.

— Right before the credits roll, Eri is all dressed up for her big day at school. Too bad Gentle and La Brava are gonna make a mess of the day. Geez, can this little girl just have some peace and quiet?