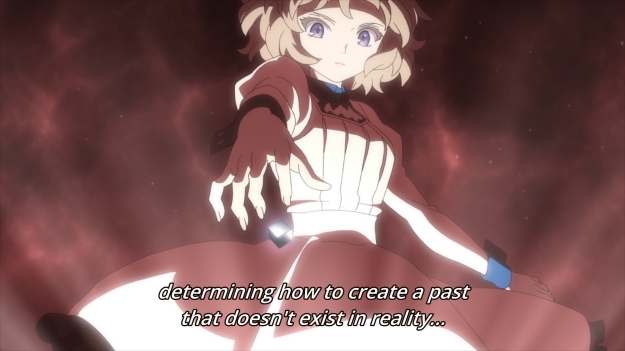 Right off the bat, we learn that Detective Terada has been murdered. There are no signs of struggle and his face has been smashed in. As a result, Saki knows that there can only be one culprit. So here’s the problem with Terada’s death… it’s an important event. It signifies that Nanase has crossed a certain threshold of violence. If left alone, more and more people will die. But this is a very clinical response to a man’s death, isn’t it? I mean, c’mon, someone just died! Shouldn’t this feel tragic? Well, we can’t. We barely knew Terada. Saki herself barely knew Terada. Of course, she regrets not doing more to deter the guy from investigating Nanase. And maybe — just maybe — if they had kept talking, Terada might have been able to break though her walls. But honestly, these two didn’t even have a chance to become friends. They were colleagues and nothing more, so you can’t fault Saki for not having an emotional response.

Likewise, neither Kotoko nor Kuro knew this guy at all. They feel the urgency to act; they need to stop Nanase before she becomes a nationwide sensation. But at the same time, the mood isn’t so dour that we can’t joke about Nanase’s ginormous tits. From my perspective, I feel like Terada’s death should have more gravitas. But from start to finish, this series has always been very clinical about its storytelling. Even the death of Kuro’s relatives isn’t treated as some great tragedy. And I don’t know how I feel about that. Kyokou Suiri, like its heroine, is very clever, but it seemingly lacks a heart. And when I look at both Kotoko and Kuro, I feel that same missing x-factor. Kuro is cold precisely because he’s not quite human. Fine, I can buy that. But Kotoko isn’t exactly bursting with warmth either. She’s very smart. She’s amusing. She’s got spunk. But there’s no one here to serve as the show’s emotional core.

— Our heroine has quite good balance even with only one leg. Her empty eye socket is a lil’ odd, though. Usually, when someone is missing an eye, they keep their eyelid closed, don’t they?

— As if you hadn’t already deduced it, Kotoko tells Kuro that his cousin Rikka is more than likely responsible for Nanase. Now… why would she wanna go and create a rampaging ghost? Both Rikka and Kuro have had an upbringing that can only be described as horrific. Our hero, however, seemingly emerged from his childhood with nary a scratch. He’s a bit robotic and emotionless, but considering everything that happened, you have to consider this a victory! Nah, I think Rikka becoming a bad guy makes more sense. Imagine if she also shares Kuro’s powers. Imagine that she can’t die, and her family is rooted in generations of evil. Yo, that’s how villains are made. If anything, Kuro is atypical. Rikka is exactly what I would expect out of someone with their backstory.

— So like I mentioned above, Terada’s death has the potential to draw the entire nation’s attention. This would empower Nanase beyond belief. As a result, Kotoko believes that she has to defeat the ghost by tonight. Great, let’s get started…

— …and we’re sitting in a room, talking about how we’ll defeat Nanase. No, I get it. It would be very difficult to come up with a singular story that could somehow cover all the bases. There are too many disparate elements to tie together, and our heroine is stumped. Nevertheless, this scene isn’t exactly… well, exciting to watch. I’m fine reading it in manga form. I can read fast. And if I understood a lick of Japanese, I probably would be fine with experiencing this same scene in the light novel. But listening to Saki narrate the obvious in a visual media? Eh… y’know, there are certain books that just shouldn’t be made into a movie. I’m not saying that this completely applies to Kyokou Suiri, but this slow portion of the narrative sure does seem that way.

— In the end, Kuro suggests that Kotoko come up with multiple stories instead of just one. You can’t satisfy everyone with one story… but you could reach a broader base with multiple stories. It’s a clever solution. I just wish we didn’t have to sit in a room for ten good minutes before arriving at it. 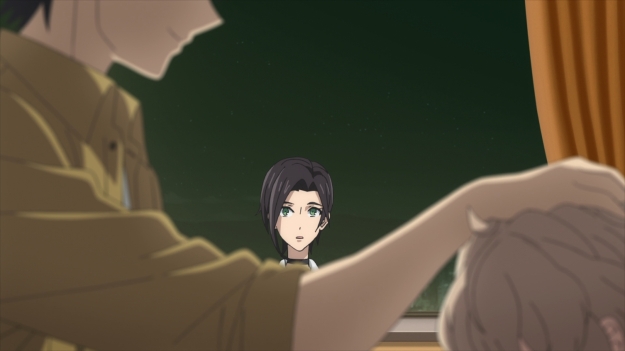 — In any case, Kotoko is pooped, so she’s going to sleep until it’s time for battle. In the meantime, Kuro gets some alone time with Saki, which probably won’t please his “girlfriend” one bit. Still, at least this conversation is a little more revealing than the previous one. We learn that Rikka has always been Kuro’s type, which is why he dated Saki. It’s also why the latter found it so surprising that he would now date Kotoko. Well… they’re not really dating, are they?

— Still, types can change. It sounds like Rikka was all Kuro had for a long time. After all, all their relatives died. It’s only natural that he would latch onto her. And now that they’re foes, he’s going to have to learn how to get over her real quick.