We go pretty deep into the rabbit’s hole in this week’s episode.

— When Sakaido awakens, he finds that he is no longer Sakaido. No, he is back to being Narihisago, and as a cruel twist of fate, his family is still alive in this dream within a dream. To the man’s credit, he doesn’t delude himself into thinking that he’s somehow traveled into the past. He’s still very much aware that this is all a fabrication. He still believes that Fukuda will wake him up after ten minutes… but of course, the flow of time is convoluted when you’re two dreams deep. I’m sure you guys have seen Inception.

— But hey, if you get to have your family back, is the fabrication so bad? That’s one of the age-old questions, isn’t it? Would you rather know the truth? Or would you rather live a lie? The problem for Narihisago is that he has such an extreme disparity between the truth and the lie. In the real world, his daughter wasn’t just murdered. She was practically tortured to death. His wife then committed suicide out of grief. Finally, for the next three years, Narihisago has been a prisoner, trapped in both his own mind and in real life. He’s turned into something of a serial killer himself. So even if this world that we see now is only a fabrication… boy, it sure does feel tempting to live a lie.

— And it’s one hell of an elaborate fabrication. Meetings — very important meetings — occur independently of the dreamer’s involvement. But who’s the dreamer? All we know is that the Mizuhanome was loaded with Kiki Asukai’s data… but it was also a dream Mizuhanome. It’s a device within (supposedly) Momoki’s ID Well. How can we trust it to work so well? I dunno, I think if you stare hard enough at the plot, some of these details are very hard to swallow.

— Narihisago gets his partner’s attention, because he intends to stop The Challenger long before the asshole ever gets to his daughter. Nevertheless, he acknowledges that this is still just a lie. But putting myself in his shoes, I have to realize that he got to hold his family today. He probably felt the warmth in their bodies. Even if it’s a lie, it would be hard to go against your fatherly instincts. I’m sure he feels like he has to protect them no matter what.

— So Narihisago initially approaches The Challenger with his handgun drawn, but he puts it away for now. He wants to fight mano-a-mano. And sure enough, it’s a bad idea. The Challenger is a trained fighter, after all. Luckily, Narihisago never fully committed to the idea of fighting fairly.

— But even with his gun, our brilliant detective nearly died to his foe. Why did he do this? Is this some form of self-punishment? Well, it was his job to catch The Challenger. And he did… eventually. After his daughter’s death. So instead of her taking the abuse, this scene screams, “It should’ve been me.” So I actually liked it despite Narihisago’s complete and utter recklessness.

— When Momoki shows up, our hero tells him to go downstairs and rescue the victim. It’s none other than Kiki Asukai. This is supposedly her dream… but then again, it’s her dream within someone else’s dream, so is it really her dream? I don’t even know, man.

— It isn’t just Kiki Asukai, though. When Narihisago finally lays eyes on her later that night, he recognizes her for who she truly is: Kaeru. She’s the girl in every ID Well. She is somehow intrinsically tied to the Mizuhanome. Hell, even when you use a dream Mizuhanome, she’s here… albeit alive.

— The next few minutes consist of bombshells smacking us in the face one after another. First, Kiki has this strange ability to broadcast her dreams and thoughts into other people’s minds. When Narihisago brings up The Challenger, he suddenly sees what it was like to be Kiki. So that settles it, right? The technology behind the Mizuhanome is only possible thanks to Kiki. The inventor of this cursed machine is at the very least an accomplice in this whole mess.

— Then a serial killer shows up. This guy likes to tear off people’s faces, so he’s known as The Face-Lifter. So why is he here? Because apparently, it’s his turn to kill Kiki. It suddenly all adds up for Narihisago. The mastermind, a.k.a. John Walker, has been allowing serial killers to get their rocks off by taking turns killing Kiki over and over in her dreams. The Challenger wasn’t satisfied, however, so he kidnapped her in real life in order to kill her for reals. But we’re told that she mysteriously disappeared from the hospital. We can thus assume that John Walker is back at it. He’s taken “Kaeru” back to continue training serial killers.

— But let’s take a step back to think about the entire picture. Momoki can’t be John Walker, right? None of us in the audience actually believes that. And he didn’t want Narihisago to use the Mizuhanome within the ID Well, because he considered it a trap. This trap, however, has been more than revealing. It’s the breakthrough that Narihisago has so desperately needed if he wants to stop John Walker once and for all. There’s no way you can possibly solve this without understanding the fundamental link between Kiki and the Mizuhanome. But  can Narihisago actually believe anything that he sees here? He’s still in a dream within a dream. He was purposefully led here. Dreams are something that our minds make up all the time. I don’t believe in ghosts, but I sure as hell see them in my dreams. How do we even know if this elaborate story about Kiki even has any basis in reality?

— The tears streaming down the victim’s “face” is… unpleasant.

— In any case, Narihisago goes and confronts The Face-Lifter. I suppose it now feels like we’re obeying dream logic, because I’m not entirely sure how a man confined to a wheelchair can make it to the serial killer’s lair.

— Unfortunately, we don’t get to hear their conversation. Instead, we jump to Kiki committing suicide, which is followed by Narihisago waking up to his fabricated wife by his side. She then hugs and assures him, “I don’t know what happens in your dreams, but if I die, that’s a sign it isn’t real.” I see we like to tell jokes. Still, her next line is probably crucial: “All you have to do is wake up.”

— Before the episode comes to an end, we see The Face-Lifter dangling from the ceiling. Narihisago is in no condition to fight an able-bodied man, so he probably talked to serial killer into committing suicide. But don’t hold me to that. Maybe Narihisago did kill him. Or maybe he was killed by someone else. In any case, it’s one less dream person to torture Kiki. Still, if none of this has any effect in the real world, why bother? We’re almost approaching isekai territory now, i.e. “Yeah, this is all made up, but it still matters!!!” Not to mention the fact that our hero has entered another world… 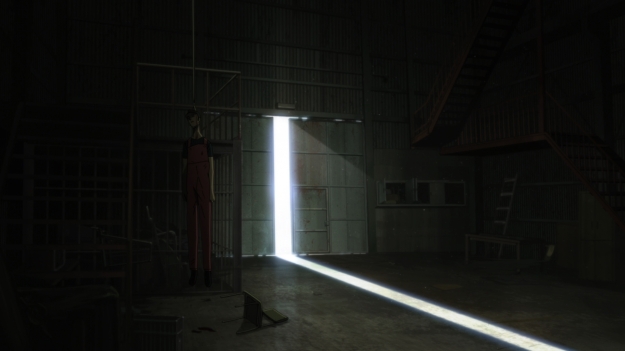 — Welp, we may have gotten some answers… but we can’t fully trust them. And even if we do, they just raise even more questions. Stew in that for a week.

— But let’s assume that everything we saw is true. This almost has to be the case. Otherwise, why would Narihisago ever want to leave this lie? If he could continue existing in a world where his family is alive, isn’t that vastly more preferable to current real life situation? Maybe I’m wrong on this, but I feel like there’s only one compelling reason to leave. And that reason is to save Kiki. She only disappeared in the real world. We have no confirmation of her death. If she’s still being tortured by John Walker out there — and there’s also the fact that Narihisago desires revenge against the true culprit — then he can’t stay here.

— Oh yeah, one last thing: Togo and her team only sent Narihisago and Fukuda on this journey in order to save Hondomachi, but the girl is nowhere to be found. Is she somewhere hidden in this dream world? Or is she in a different dream world entirely? What has she been experiencing since we last saw her? Y’know, instead of progressing forward, there’s a good chance that next week’s episode might just focus entirely on Hondomachi’s dream within a dream. Maybe.