Would it surprise you to know that after a week’s hiatus, we’re right back to eating and drinking our MMO lives away?

— Before the infinite eating can begin, the anime does introduce us to a couple of new characters. This weird jiangshi lady is the most notable of the two. For whatever reason, a bunch of folks want her dead, but she has the ability to snatch your heart from a distance. Oh man, don’t you love just powerful women? It’s okay if they’re undead… and have serrated teeth.

— Also, snatching someone’s heart apparently makes them bleed from their eyeballs. The more you know…

— Alright, alright, back to our original programming: eating!

— And with all this eating comes exposition. Sigh. So what are we chatting about now? Well, Ray and Nemesis want to get stronger. They want their revenge against that “mysterious” player killer. But guys, the player killer is sitting right in front of you!

— Marie claims that she hasn’t had a real job in over a year. I really wish these MMO anime would focus a little bit more on the people behind the avatars. Like I’ve argued before, what makes this genre interesting is the distinction between real life and MMO life. If you take the former away, then all you have is just another generic adventure-action anime.

— Anyways, Marie tells Ray the obvious: you can’t put everything into one stat. You hear that, Shield Heroine?

— In particular, Ray wants to be a glass cannon, which would only work if he had a beefy tank to protect him. Hint: he doesn’t.

— When Nemesis asks about Marie’s Embryo, the woman starts sweating bullets. She’s the worst liar in the world, but it doesn’t matter. Our heroes are dense as hell. 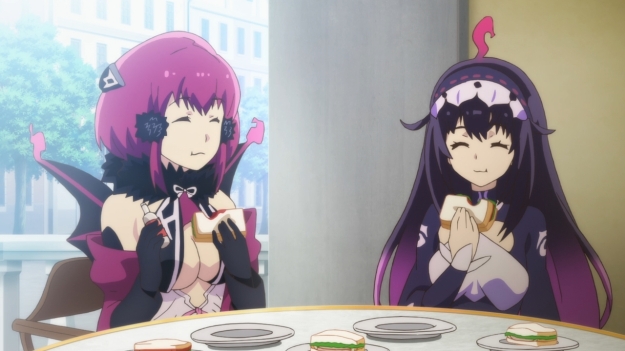 — But let’s take a brief break. Don’t worry, we’ll go back to eating soon enough. Ray gets a fat pile of gold for defeating those child murderers. Curiously enough, all of the money went to him. Maybe Hugo didn’t have the quest flagged or something.

— We then go to have a chat with Ray’s brother, whom we haven’t seen in a while. He then literally tells our heroes that they should… sit down somewhere… to eat… AHHHHHHHHHHHHHHH!

— For whatever reason, there’s a cute furry animal on his head who likes to communicate only in internet slang. Yes, that’s right. ECKS DEE, holds up spork, yadda yadda yadda.

— When a Master drops by to take the furry animal away, Nemesis has an odd feeling. This show isn’t very subtle, so it’s obvious that the furry animal is actually another Master. Infinite Dendrogram likes to do this sort of thing. Oh, you thought Cyco was another Master? Well, she’s actually an Embryo!!! Oh, you thought Behemoth was an Embryo?! Guess what! Anyways, I’m still waiting for one of these characters to reveal that they’re the opposite gender in real life.

— Alright, now that we got those character introductions out of the way, it’s time to sit down to eat!

— What’s the exposition for this scene? Eh, nothing too interesting. We learn a couple of things about Kuma.

— Hugo also shows up, and he doesn’t want the fat stacks of gold. Welp, his loss.

— Our knight also looks sad when Ray loudly exclaims that he would never keep the money to himself. After all, he would never lie to a friend. Too bad our knight isn’t so chivalrous after all. It just goes to show that people are just full of hot air. A truly chivalrous person wouldn’t constantly need to remind you of that fact. They would just be chivalrous.

— Feeling conflicted, Hugo tells Ray that in the upcoming PvP tournament, Figaro will be entering from the West. I have no clue what that means, but it’s apparently sensitive information related to the evil penguin’s plan. Yeah, the evil penguin.

— This evil penguin. The evil penguin of doooooo-…. ahem. Clearly, something is going to go down at this tournament. It just won’t happen in this episode.

— Instead, we get to watch two nobodies fight, and boy do they fight… with blobs of whatever. Exciting stuff.

— Since the action is no fun, let’s go back to talking. Talking about how Figaro will fight the jiangshi lady. It’s supposed to be hype because they’re at the top of the PvP rankings.

— In fact, take this item that will help us talk even easier! Boy, am I glad you’re back, Infinite Dendrogram.

— And that brings us to the end of the episode. Sure, sure, Infinite Dendrogram got the “setup” out of the way, so we should see some mayhem next week. But let’s not kid ourselves. The story could’ve done a better job at creating tension. It could’ve done a better job at conveying the sense of impending danger, but it didn’t. It instead defaulted to what it has always done, which is to show us scenes after scenes of characters eating.