But only after we get drunk. Priorities, people, priorities.

— So while Licht and Jail were busy fighting, the nearby town of Linden was razed to the ground. Not only that, a lake has been replaced by a giant gaping hole full of swirling purple clouds. Ooh, how ominous.

— There are bodies just lying on the street, and the only survivor is an injured soldier raving about some flying demon from the abyss:

But this is not the actual demon. This is just Jail’s fanciful imagination. Needless to say, Jail has his doubts. Well, it doesn’t matter. In the end, all roads lead back to Licht.

— Speaking of the devil — and devils aren’t exactly demons — our friend Licht is back in the city with Nana and Hina. Um, did they just make a circle and go nowhere?

— Licht wants free stuff, but Nana forces him to work. Even so, Hina looks at him with a fondness in her eyes. Ah, nothing like deadbeat dudes with no money.

— It doesn’t take long before Jail and his underlings return to the city and find our heroes. Why even bother going anywhere? Let’s just stay in one place.

— Jail wants some answers, and he thinks he can get them out of Licht. But look, we just had a pointless battle last week, and it didn’t get us anywhere. So what’s the next best thing? A drinking game. Yep, that’s right. These two dorks are gonna drink and they’re gonna drink all episode. See, I thought the demon from the abyss thing meant we’d spend an episode on that. But no, drinking first.

— The next few minutes are literally just these two men drinking with Licht playing dumb every now and then. Sigh.

— What are the girls doing? Well, they’re getting drunk after one sip of alcohol and obviously talking about Licht. What else would they be doing? You think girls have anything better to do than to talk about the hero?!

— Lynn thinks Hina is prettier than her, but she won’t give up! Darn it, she won’t! After all, she has all those fond memories of Pudding! All those memories from that… uh… one whole day that she spent chasing him! Yeah!

— The only remotely entertaining thing about this week’s episode is the inconsistent character models. Here’s Licht: 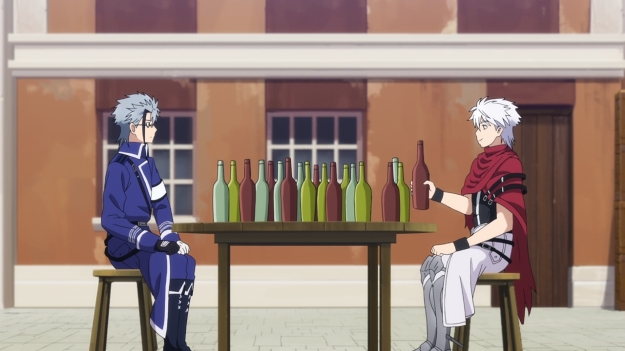 — Eventually, we do come to the end of the episode, which means it’s finally time for the serious stuff to kick in. All of a sudden, another gaping hole appears.

— Jail immediately barks out orders. He wants the town evacuated while he and his soldiers try and stop this so-called demon of the abyss.

— Meanwhile, Licht listens closely to the gaping hole as tears well  up in his eyes. He starts telling Jail that even the soldiers should evacuate as well, but he won’t explain why. As a result, we get nowhere. Jail screams for answers, and Licht won’t give him any.

— Finally — FINALLY — the demon shows up… 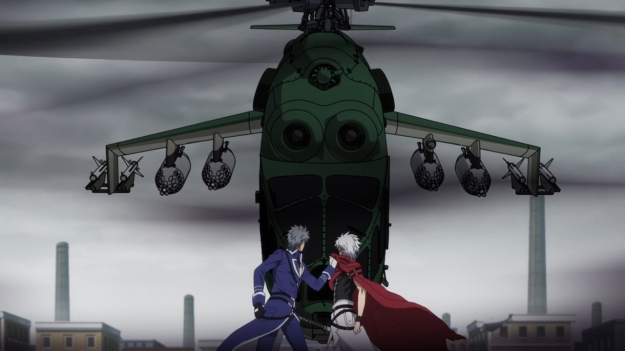 …and apparently, the demon identifies as an attack helicopter.