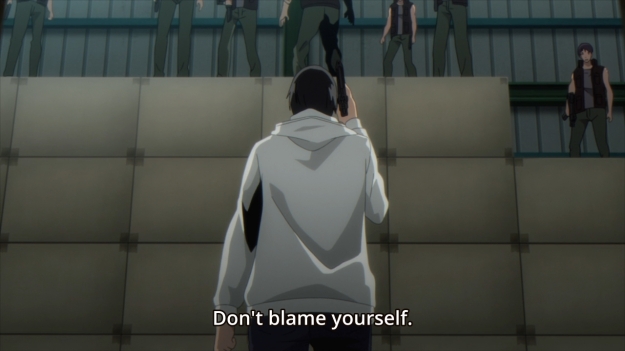 I didn’t expect this series to be only eleven episodes long. I didn’t particularly like Darwin’s Game, but I have to give it credit for being succinct…? Ah, whatever. In the interest of keeping my Friday light, I won’t be blogging Kabukicho Sherlock this week. I’ll wait for that series to wrap up. Alright, let’s finish Kaname’s story… for now, anyways. We’ll probably get a sequel at some point. Maybe.

— So when we last left off, our hero failed to save his buddy. As a result, he’s decided to stop being such a goody-two-shoes. It’s not that he’ll become evil like Wang, though. He’ll just opt to be morally gray. We’ll get to the specifics by the end of the episode. For now, he has an entire clan to kill. Kaname has decided that there isn’t a single soul worth saving in Eighth. Is that really true? Probably not. I’m not arguing that Wang’s men are innocent by any means, but it’s hard to believe that every single one of them is irredeemable. Still, I won’t lose any sleep over their inevitable slaughter…

— What’s silly, of course, is how none of the bad guys even attack Kaname. As a result, our hero can just stand there and give a speech about how he was mistaken but now his mindset has totally changed.

— Yeah, because they didn’t even fight back!

— I forgot these two were still going at it. I don’t really know anything about Inukai other than that he’s here to help.

— Anyways, one by one, Kaname murders Wang’s men. As for the big, bad boss himself, our hero has actually delegated that task to Shuka. Why? Beats me. I guess out of the entire team, she’s the one who would actually enjoy toying with her prey. Y’know, like a cat.

— See, this is exactly what I mean. Instead of standing there, shaking in your boots, droning on and on about how Kaname isn’t anything special, this underling could’ve just shot at the guy. Look, his back is turned to you! Just shoot him. Kaname would still survive, because he has plot armor. He’s the main protagonist, so he can’t die. Nevertheless, I wish the writer would come up with a better excuse than “the bad guys literally don’t fight back.” 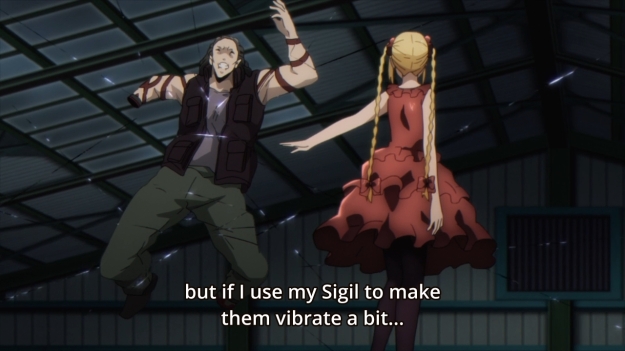 — Luckily, Wang doesn’t even get to lay a single finger on Shuka, because she has surrounded herself with super sharp wires that can slice through bone. Every time Wang tries to teleport,  he ends up losing a limb.

— So the problem with this resolution is that I don’t really care all that much about Wang getting his comeuppance. I do understand what the episode is trying to accomplish. Torture is bad, right? I think we can agree to that. Nevertheless, when a villain is so evil and remorseless — when the villain is someone whom you would love to hate — it can be cathartic to watch the good guys completely break them down and force them to beg for mercy. This is why we’ve devoted nearly half of this finale episode to torturing Wang. And it’s not just any regular beatdown. It’s not as though Shuka has to power up or anything like that. It’s a complete domination. She’s taking her time, because she (as well as Kaname by extension) wants to rub it in. But Wang is such a terrible villain, so this all just seems kinda boring.

— Anyways, Wang tries one last ditch attempt to teleport away, but he just runs into Kaname instead. Our hero then reveals some privilege he had gotten from the game master. Something about a winner-takes-all scenario that allows his clan to completely wipe out another clan. Yawn. The point is that Wang and his clan are done. Everyone dies.

— Interestingly enough, if it weren’t for Kaname’s final gambit, Inukai would’ve bitten it.

— And with Wang down, our hero sets his sights on a new target — a much loftier target. But since this is the final episode, you’ll probably have to follow the manga to see how that plays out. And considering how beating the game master would also end the series, you’ll probably have to wait a long, long time to ever see Darwin’s Game come to a conclusion.

— Shuka is still all deredere, but Kaname doesn’t embrace her back or anything. With these sexless protagonists, I have no idea what they’re thinking. Does he realize that she has romantic feelings for him? He must, right? But this is anime, so all bets are off.

— Between Shuka and Liu Xuelan, the pickings are pretty slim. Obviously, both girls are attractive, and in theory, they should both be loyal. But they’re also both batshit insane.

— Quick, everyone pose for the nonexistent camera! Clan shot!

— After the ending credits, we get a few quick teases about the future direction of the story. For instance, Shuka and Liu aren’t the only ones who might have a crush on Kaname. This murderous priest seems like he might want a piece of our hero as well. 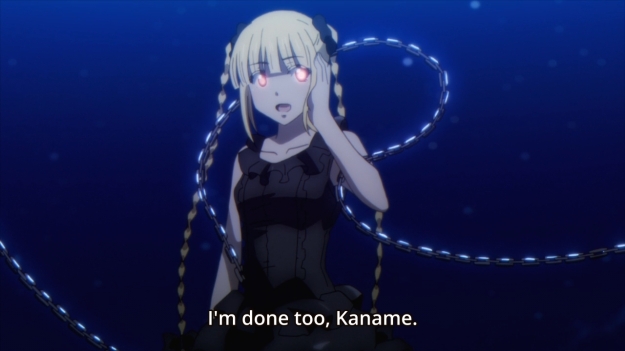 — Everyone wears black now, because they’re the Sunset Ravens. Meh, I think she looked better in red.

— Kaname embraces his newfound morally grayness by banning the game within his clan’s territory. If you try to break the rules, then he has no qualms about killing you. But ultimately, his immediate goal is to protect everyone within his territory. He simply accepts that you gotta break a few eggs to make an omelette. So I guess that’s character development… not exactly riveting, but hey, we still got something.

— Last but not least, our hero finds himself in yet another event.

— Final thoughts? Well, I guess if I had to give the show credit for something, my view of Kaname did slightly improve over the course of the series. Okay, time for the negatives. The animation blew chunks. I can’t put it any simpler than that. Even with the improvement in Kaname’s arc, everyone here is boring and dreadfully cookie-cutter. No one really deviates from their preassigned tropes. There aren’t any interesting character interactions either. Still, the show is all about the killing action, so how did it do there? Meh. Lame. Uninspired. I enjoyed maybe five seconds of the fight between Shuka and Liu. Everything else was forgettable. All in all, Darwin’s Game is a pretty subpar series.