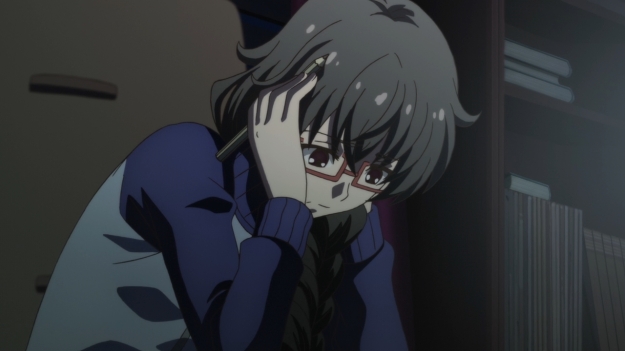 Everyone has a problem! And the only cure is a video game!

— The episode kicks off with backstory for the composer-slash-conductor dude that Marie has to fight. If you’ve been following my blog, you probably already know that I hate this sort of storytelling. I hate when anime gives you paper-thin villains only to develop them during a fight. Well, I don’t care about him before, and I certainly don’t care about him now.

— What’s Veldorbell’s gist? He needs inspiration, which he can neither find within himself nor the modern world. As a result, he turns to Infinite Dendrogram for help. After all, it’s a world where you can fight goblins, ships that decimate an entire forest, potions that can give people dog ears, a stereotypical knight piloting a mecha… yes, truly an inspirational game full of totally not disparate elements. But silly me, this is why it’s called Infinite Dendrogram. This world is full of endless possibilities even if those possibilities look silly together. In any case, he wants to help Franklin become a hero, ’cause apparently you can’t observe that sort of thing in the real world.

— We also get Marie‘s backstory. Like Veldorbell, she’s also a creator who has lost her creative spark. But instead of music, her medium of choice is manga. For some reason, she can’t continue her series. Even after joining Infinite Dendrogram, she hasn’t continued her series… but hey, the creative spark is back! It’s just not being, uh, put to any use. Isn’t the Berserk guy too busy playing Idolmaster or some shit to update the story? Ah well…

— To be honest, I can understand Marie’s strategy. Ian Fleming used to be a naval intelligence officer, and he drew from his own experiences to help him create James Bond. Obviously, you don’t need to have be a spy in order to write spy stories, but it certainly helps. And in Infinite Dendrogram, Marie is certainly living out her character’s life. It’s just too bad she hasn’t actually done anything with it.

— Anyways, the actual fight between Marie and Veldorbell follows a pretty generic template. Bad guy gets the upper hand, good guy strikes back with an unexpected move, good guy wins. I’m not gonna do a deep dive into something as mediocre as that. All we really need to know is that Marie wins, but she’s too weakened at the moment to go after Franklin.

— Speaking of the devil, Franklin tells Hugo to let Ray through the gate. The former has a bone to pick with our hero. After all, Ray was the unexpected wild card that prevented Liliana from being assassinated. Man, I actually had to pause the show and rack my brains for a minute, because I had completely forgotten about Liliana. I was like, “Who?”

— And right on cue, Liliana is here with an entire army to save the princess. Nevertheless, Franklin holds them off with this weird, alien-like monster. Welp, the good guys seem ill-prepared. 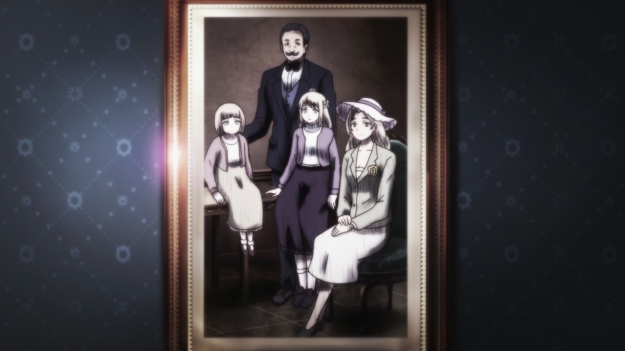 — So of course, it’s time for more backstory. Not only that, it turns out Hugo and Franklin are both sisters in real life. Franklin is the older one. That’s neat, I guess? I still don’t know why anime about MMOs act like this sort of thing is rare. There are tons of dudes running around as catgirls in FFXIV.

— So what’s up with these two sisters? Well, they’re French — super rich and French. Unfortunately, they had a shit father who not only abused their mother, he drove big sis away from home. Apparently, he had picked out a husband for her, so he did not want her to continue sculpting things out of clay. First, do rich people in this day and age still do arranged marriages in the West? I suppose it’s possible. I just feel like it’s also pretty rare? Oh well. Second, I doubt most dudes would give a shit about a girl with a clay-sculpting hobby. I know I wouldn’t. Knock yourself out, babe.

— Nevertheless, big sis ran away. As a result, mom finally gains a spine and divorces her husband. And of course, Yuri (a.k.a Hugo) blames herself for not being able to protect them. She then started to idolize knights and their chivalrous code. Of course, that stuff is all idealized fantasy. Actual knights were no better or worse than any of us. Nevertheless, you can’t be a knight in the real world! But you can become one in Infinite Dendrogram! I get, I get it…

— I dunno, something still bothers me. Like sure, we turn to video games as a form of escapism. MMOs take that step further by letting us live out our fantasies with other people. But my problem with Hugo — or should I call her Yuri instead? — is the same as my problem with Marie: playing this game hasn’t actually helped them achieve their dreams in the real world. They’ve simply replaced the real world with a video game. That’s not progress. That’s just running away from your problems. Hugo specifically wants to “defeat any tragedies that threaten helpless women.” It’s certainly a laudable goal. And if you want dry runs of playing a hero in a video game, knock yourself out… but when are you actually going to apply these lessons to the real world? We can sit here and debate all day as to whether or not Tians deserve help, but there are actual women in the real world, and they definitely need someone to save them.

— Back in the present, Hugo reasons that what they’re doing now is for the greater good. If everything goes according to plan, there won’t be a war. Maybe. But even if we avoid a war, it doesn’t mean that we avoid suffering. One side is still defeated. One side will still be subjugated. Maybe Hugo thinks that some amount of suffering is unavoidable, and they are trying to minimize it. Still, can you blame anyone for not putting their faith in Franklin? He (she) doesn’t seem like someone who has the world’s interest in mind. Franklin is just your bog standard mad scientist with a dash of narcissism thrown in. If this is all roleplay, that’s one hell of an acting job.

— Anyways, Ray finally arrives, so Hugo lets him through like they were ordered to. Rook will get to fight Hugo instead. These two have only just met, but the former already hates the latter. The former has in fact already psychoanalyzed the latter. What a sharp dude.

— As for our hero, he finally gets to confront Franklin, but that is of course where the episode ends. Even though we already got Franklin’s backstory in this week’s episode, it was from Hugo’s perspective. Lil’ sis only explained why she is playing the game. We still don’t really know Franklin’s reason for being here, so I expect even more backstory in next week’s episode.

— Doesn’t anyone here just play for fun? Do you guys really have to tie your — and let’s use a French term out of respect for our two sisters — raison d’être to an MMO?