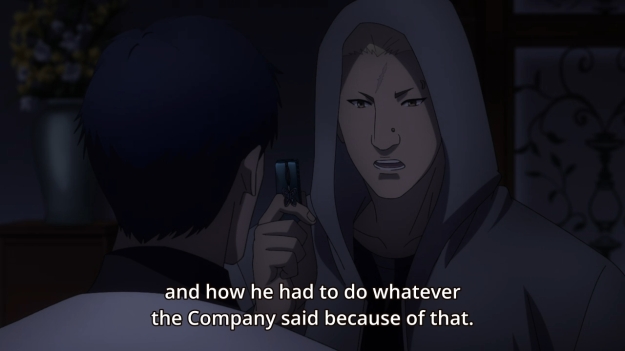 What a hot mess. Apparently, Hayashi hid a secret message for Satoru with Katsuragi. Like they always say, the safest place to hide from the enemy is oftentimes with the enemy. So Satoru reads this message, and it’s all about how Hayashi had planned to rescue him, Tsukasa, Meiling, and (if necessary) Hiroki. Well, we all know how that turned out. The old man’s a vegetable for good now. Still, the message does warn Satoru to be wary of Tsukasa. Unfortunately, our guy ain’t too bright! He’s supposed to assess whether or not Tsukasa has been brainwashed, but he ends up being convinced by the guy’s crocodile tears. He then ends up telling the latter all about Hayashi’s secret message. Sigh… I guess it couldn’t be helped. Up until this point, Satoru hadn’t shown any inkling of distrust towards the Company. Hell, they’ve had him under strict surveillance from the beginning, and he just goes along with it. Why? ‘Cause Jin has a pretty face? Well, my point is that you can’t just flip a switch. Someone can’t go from trusting to distrusting in a matter of minutes (or however long it took him to read that message). So of course, Satoru’s bound to be swayed by Tsukasa’s terrible acting.

But lemme tell you what I really hate. Satoru tells Tsukasa that the old man was always worried about him. And guess what? The latter could read all about it! All of a sudden, Tsukasa thinks back to the very moment he crushed Hayashi. He recalls how even then the old man was trying to protect him. He falls to his knees and throws up when he realizes that Hayashi never stopped worrying about him. On the one hand, I understand how resentment can build up over the years and make you do something you never truly intended to do. He thought he was abandoned. He thought he had been replaced. He wanted to strike back and hurt Hayashi. But c’mon, man… don’t go having last second realizations now! You had the chance to talk to Hayashi. You had an entire car ride to hash things out with him… but you still crushed him. You’re shit, dude. I hope you bite it in the end. Unfortunately, Tsukasa is one of the main characters for some reason. He and Hiroki are the two yaoi bait pretty boys of the series, so I have to imagine that he has plot armor. Seriously, just admit that they’re lovers. Be straight with us (no pun intended). All this “please don’t ever leave me” crap is silly if they’re just best buds.

In the end, it seems as though Tsukasa’s 11th hour epiphany is still all for naught. Satoru tells Tsukasa that they can still run away, but the latter feels as though it’s too late for him. He screams that there’s nowhere for him to go. Why? I know the Company would devote as much resources as needed to hunt them down, but even then, is it really that much better to remain under their thumb? To be their slave for the rest of your life? If he escapes with Satoru, Hiroki, and Meiling, who does the Company have left to stop them? The story makes it seem as though they have no other ability users. What’s odd is that Tsukasa thinks he can somehow gain power and influence within the Company, but he doesn’t think he can run away from it. I would imagine that the former is harder. Running away is one thing. Maybe eventually, they’ll get tired of looking after you. On the other hand, people in power will almost never relinquish their power. If anything, your attempt to steal their power will only provoke them to lash out even harder… which is exactly what’s happening now, isn’t it? The chairman didn’t feel safe around Tsukasa, which is why he’s trying to take Hiroki away.

Ah well. Tsukasa ends up ratting Satoru out to Long, and right before the credit ends, we hear a shot go off. I wonder who’s gonna die in next week’s finale.

— The fearsome wooly mammoth ends up being a loli. Sigh… But despite her tiny stature, she packs quite a punch. Elephants are still elephants.

— Jin finally arrives onto the scene, and he only now realizes that Anne is a neanderthal. Apparently, he should’ve noticed from the start because she has red hair, pale skin, and blue eyes. Um, don’t a lot of redheads now meet that criteria…? By the way, how did we know what eye color they had? I imagine hair can survive… and if neanderthals inhabited Europe, then it’s probably not surprising that they had pale skin.

— I find it funny that even the haremettes have started to realize that Jin is not such a wholesome dude.

— We got some backstory for when Anne first met the mammoth. I really don’t care about either of them, though. I’ll just say one thing. You see characters eating their lunches in the restroom every so often in anime. I don’t think I would be able to keep my appetite in American public restrooms. Just imagining it makes me wanna throw up.

— In any case, Ranka is gonna try and get Hitomi back by fighting the mammoth in a boxing match. That’s cool and all, but then anime uses this opportunity to cram fanservice down our throats. Normally, this is just par for the course. Fanservice in a harem anime? You don’t say! But man, I feel extra bad for Hitomi, since she’s being led around in a skimpy bikini and a leash. How degrading. But at the same time, Hitomi isn’t really a real character. She’s just one of those super nice, super patient, super happy Japanese maidens. I was watching the first season of Fruits Basket last night in preparation for the upcoming second season, and it just reminded me how much I dislike this archetype. Girls like Hitomi and Tohru are just Mary Sues.

— Still, Hitomi’s infinite niceness is ultimately what saves the day. After all, a wolf doesn’t really stand a chance against an elephant, wooly or not. Jin tries to pump her up with one of those patented anime head pats, but it still isn’t enough. Ranka not only gets goaded into eating a solid punch, I thought she would lose to being ringed out at one point. But apparently, that’s not a thing here… hm. So anyways, she was gonna lose until Hitomi makes up with Anne (even though the former did nothing wrong in the first place). As a result, the latter tries to tell the mammoth to back off. When the mammoth refuses, Anne cancels their friendship. This shocks the mammoth so much that she falls to the ground all by herself. Ranka wins by default.

— In the end, everyone gets together to share a good meal, and Ranka suddenly gets shoujo vision. It just goes to show you that dogs will love you even if you abuse them. And thus we have our happy ending…

— …until bugs showed up and somehow manages to beat the tar out of that impala-loving lion. Pfft, I guess this crappy series is gonna get a sequel. Are we really gonna add bug girls to the harem? You bet!

— Do I even need to offer my parting thoughts to the series? C’mon, it’s a shit anime. I know it, you know it, we all know it.