Yeah, this image pretty much sums it up.

— When we last left off, it looked as though Payne might have dealt a lethal blow to Kaede, but of course, that can’t be true. It’s very rare for the protagonist to die before the final episode. That’s the problem with anything episodic. Cliffhangers are never that surprising when the outcome is predictable.

— Kaede ends up surviving with 1 HP thanks to a skill… trait…? I’d say trait, but it doesn’t matter. The point is that the battle continues. And man, everyone’s scattered all over the place. There’s no front or backline at all! Tanks have got to protect the squishies! Formation, people, formation! Where’s your discipline!

— Also, you shouldn’t really hold your shield like this. You should hold a shield with your palm facing you… unless, of course, Kaede’s palm is facing her, and the animation is just that bad. Honestly, nothing would surprise me.

— Anyways, snark aside, there isn’t really much to talk about here. It’s just your regular ol’ back and forth. Payne and his buddies have the advantage, Kaede and her friends push back, Payne and his buddies regain the advantage, rinse and repeat. Payne even sounds like a generic JRPG villain. Sure, there are “casualties.” Iz tries to help Kaede out, but she ends up being the first to bite it. Kanade soon follows her. Still, dying isn’t all that bad in this event if this is only your first death.

— Eventually, our heroine is pushed to the brink when Payne readies his ultimate move, so she has to use her one last ace in her sleeve: turning into a kaiju. And well… that pretty much seals the deal for Maple Tree. Payne even dies with a smile on his face. I guess there are two types of PvPers. There are those who hate to lose, so they would rage at any death. Then there are others like Payne who might just be bored with winning all the time, so now that he actually has an actual challenge to overcome, he’s secretly overjoyed. Personally, I’m in the “hate to lose” camp. I’m too old to rage, but I’m too competitive to enjoy games like League of Legends anymore.

— Kaiju Kaede (gotta have that alliteration) proceeds to make short work of the rest of Payne’s buddies, and we soon see her celebrate with her guild. She should just stay like this for the rest of the story. It’s much more amusing this way.

— Still, the only thing Maple Tree has done is successfully defend themselves against the top guild. This doesn’t actually win them any points. There’s also no guarantee that they can beat Order of the Holy Sword again. As a result, team strategist Risa decides that there’s only one thing left to do: screw all the little guys! 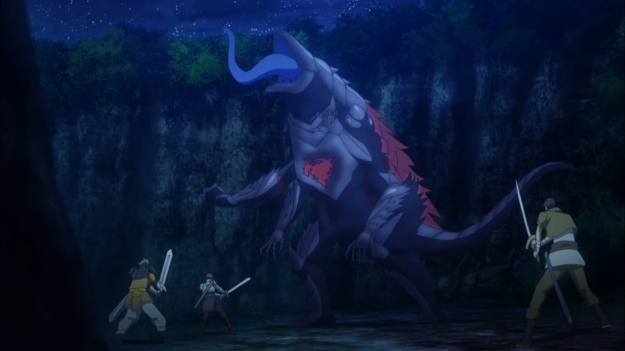 — What we see next is Kaiju Kaede going on a rampage. If they wipe all of the guilds out, then Maple Tree will guarantee themselves a top 10 finish by default. That’s not so bad, right? I would agree, but part of Risa’s plan involves helping Flame Emperors out. Mii and her friends are under attack from all sides, because they’ve made too many enemies. Under Risa’s suggestion, however, Kaede saves her supposed rival. This way, Flame Emperors can help Maple Tree destroy the weaker guilds. Order of the Holy Sword quickly catches onto the plan so they do the same. Basically, everyone in the top ten gets the same reward, which is obviously a bad idea. Why? ‘Cause there’s no real incentive for the top guilds to go after each other other. Instead, they can easily band together to crush everyone else. As you can tell, this is very similar to how established businesses might collude in the real world.

— Also, is it fair for one player to be able to wipe out hundreds of players with just one ability? Frederica says no, but her guild leader disagrees. Payne claims that because Kaede got the ability fair and square, then it’s okay. Maybe fairness isn’t the right word. Let’s say imbalanced instead. Horribly, horribly imbalanced.

— Then to make matters even worse, Kaede proceeds to create multiple clones of herself (with her friends’ help) to wreak even more havoc. Should the devs do something about it? They say no! Kaede has become the face of the game, so she’s actually getting more people to join. Pfft, sure. Like I’ve said before, I’ve played a ton of MMOs, and the one thing that MMO gamers like to bitch about is game balance. But who knows? Maybe by the time we get VR MMOs, gamers will have matured. Or maybe this is an alternate universe where everyone’s just chill like Kaede.

— Yep, this is your merciless god in action.

— In the end, Maple Tree secures third place, which they’re ecstatic about. They’re so ecstatic that they’re throwing a party with Flame Emperors and Order of the Holy Sword. Speaking of the latter, the guild still finishes in first, but they did lose to a small guild. What’s the opposite of a moral victory?

— This episode is so final that it actually has two sets of credits. Amazing. I won’t describe the ending montages. They’re nothing interesting.

— Alright, what can I say about Shield Heroine? Eh. In the end, Kaede kinda ditches the shield. She also kinda ditches the all-defense thing. Kinda. Kaede’s always gonna be tanky, but she’s more than that now. She’s pretty much just overpowered in all aspects. We can rail against the show being boring, but others would counter that it’s easy-going and relaxing to watch. The same can then be said about how the show lacks almost any compelling characters or character interactions.

But even if you hand-wave these criticisms away, I still feel that the anime failed at its original premise, i.e. exploring how a defense-only character might work. Plus, forget power creep. This is more like a power landslide. We went from summoning a hydra to Mecha-Maple and then finally Kaiju Kaede in just one season. How can you top a kaiju? If we get a sequel, what’s next? Is she gonna start chucking galaxies at her enemies like Gurren Lagann?