How can one little girl say something so controversial yet true!

My Next Life as a Villainess

Otome Game no Hametsu Flag shika Nai Akuyaku Reijou ni Tensei shiteshimatta… is a mouthful, but I’m not gonna call this Hamefura either because I hate mashing words together. As a result, I’m gonna go with My Next Life as a Villainess. I like it; it’s short and simple. Anyways, so far, this show seems amusing enough. I’m not going to devote a post to it every week, but I don’t find it super boring either. Basically, a girl dies and finds herself in one of her otome game. Unfortunately, she’s been reborn as Catarina, the cruel villainess. There are four bishies in this game, and two different endings for each of them: no matter who you woo, Catarina either gets exiled or straight up killed. So of course, our heroine starts making plans to try and defy her fate. She learns how to wield a sword in case she ever needs to defend herself. She starts farming in order to hone her earth magic. She even tries to get her adopted brother to teach her how to animate dolls. This way, if she ever does get exiled, she can use said dolls to make money.

My favorite part is probably the little meetings inside Catarina’s head. Similar to Inside Out, all of her emotions are personified, and they engage in regular discussions regarding the next best course of action. On the other hand, I would like to see more fleshed-out reactions from the people who know Catarina best. The girl’s personality has essentially changed overnight, but we only get a few befuddled looks from the people around her. Her parents barely seem to care. In any case, this show doesn’t have a brilliant concept by any means, but I also haven’t personally seen another premise like this. So for now, I’m gonna stick around and see how things play out. 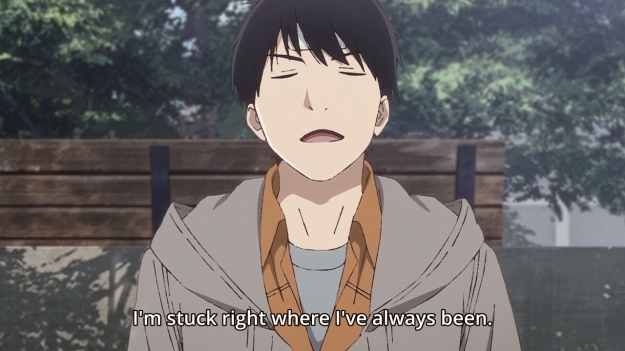 Well, this is going to get somewhat personal, so I apologize for that. On paper, I should relate to the main character, and I suppose I actually do… to a certain extent. Like Rikuo, I did languish for a while after getting my college degree. If you never put yourself out there, you won’t accomplish anything, but you won’t get hurt either. Like Rikuo, I can be too self-deprecating for my friends’ tastes. Gotta be able to laugh at your own faults, right? This way, we can avoid the pain of genuine self-reflection. And most importantly, like Rikuo, I was in love with a girl who was too good for me. I didn’t wait years to confess, though. I confessed then lost the girl. Small difference in the end, I suppose. The point is that I know the feeling all too well. Plan A didn’t pan out, and I didn’t have a plan B for a long, long time. I just didn’t want to think about it until I really had to. I was lucky enough to be able to survive for years without putting in any effort, so that’s exactly what I did. So again, I used to be Rikuo.

The problem, however, is that I never had a Haru. I never had a manic pixie dream girl walk into my life out of nowhere. Rikuo just happens to meet a girl who has a crow perched on one of her shoulders because it’s oh-so-quirky and eccentric. He meets a girl who decides to stalk a part-time conbini cashier and blow into his ears. He meets a girl who constantly forces her presence into his life just because he made a token gesture of friendliness. And that’s my major disconnect with this anime. A lot of us go through this phase, and that’s what I can relate with. Then at some point, we manage to drag ourselves out of this seemingly bottomless pit of malaise through one means or another. But if you’re gonna make that means a manic pixie dream girl, it just feels… like a cop-out, I guess? Gee whiz, if only a girl who should still be in high school would show up in my life and give it some color. Maybe I’m having a conniption over nothing. Maybe there’s going to be more to this relationship than what we see at first glance… but like Rikuo’s general outlook on life, I’m not optimistic.

4 thoughts on “What (Else) I Watched Today: My Life as a Villain and Yesterday wo Uttate”