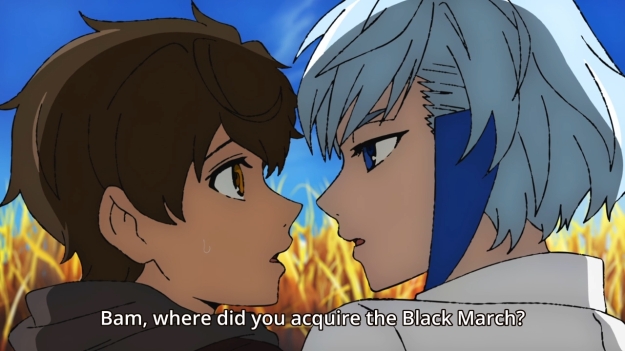 So um… is this supposed to be good?

— Right from the get-go, we see Bam casually block the gator’s attack. I guess by just holding the Black March, he’s strong now? Or maybe he’s always been strong even though he looks weak? Your guess is as good as mine!

— I’m not sure whether or not I’m supposed to take this show seriously.

— Like I said last week, I have a hard time relating to Bam, ’cause he tells himself that he needs to kill without even seriously thinking about it. I guess these characters are not normal, so I shouldn’t expect normal reactions out of them. But who finds themselves in a killing game and just decides to… y’know, kill? And without even having to think it over for a second? Ah yeah, my friend went missing. Time to off some random people in order to find her! Who cares about them! That’s… psychopathic, man. But when Khun — that’s the new guy with the blue hair — tells Bam that the silent giant is “mild-mannered,” our hero is glad that he has yet to shed any blood. So are you determined to find Rachel no matter what or not?

— Khun starts grilling Bam about the Black March. For example, why would our hero even have it? Sadly, the truth is far less interesting than any theory that Khun might have already cooked up in his head. He thinks there must be some crazy reason why Yuri might have taken an interest in Bam, but it’s probably just due to his “cute” face. Look at it. Just gaze deep into Bam’s soul and you will instantly understand why a princess and her sword would instantly wanna help him.

— On the side, we have these two individuals facing off. Why? Iunno. Who are they? Iunno. Why do they take such a blase attitude towards taking a life? Iunno. Maybe people are just born into this fictional universe with the innate knowledge that you have to kill or be killed.

— Back to Bam and Khun, the former explains that he has to find Rachel at all costs because, uh, he belongs to her. So he’s just like an abandoned puppy who desperately wants to find his master. Man, that makes me identify with him even less. You know what word has become super popular lately? Simp. It’s being used so much that I kinda hate it. But when it applies to the situation at hand… eeeeehhhhh…

— Look, I’m just saying… if someone can just ditch you without even giving you a proper explanation, they probably didn’t care about you all that much. I wouldn’t be surprised if Bam meets Rachel at some point, and she just straight up shanks him because it would help her pass whatever stupid challenge they’ve found themselves in. 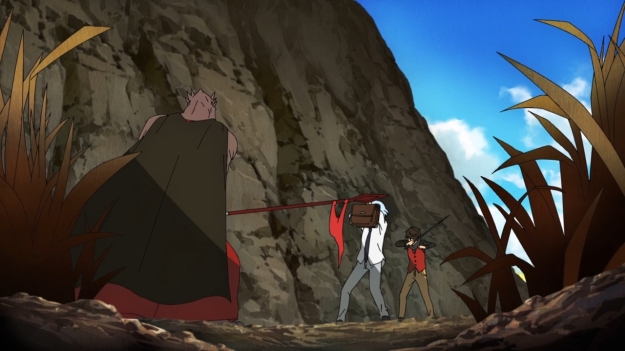 — Well, the dumb gator finally finds these two boys, but the first stage of the test is over. Now that there are only 200 contestants left, they must somehow form teams of three within the next five minutes. Obviously, gator is dum dum. And dum dum gator only wants to kill. As a result, the boys have to show him the power of boy love. By hugging the gator against his wishes, the three of them are now a team! Yay!

— Sigh… I kinda hate these dumb, random ass challenges, but it’s made even worse by the fact that these characters act like cartoon characters. As a result, the stakes just don’t seem all that high. It all just seems very… gamey. There isn’t a gamut of human emotions that helps flesh these characters out. For instance, one guy is just annoyed because he keeps being ignored. So we have murderous people and annoyed people. There’s not a whole lot of range here.

— Afterwards, the gator is still raging about their forced skinship, but Khun placates the dude by giving him… chocolate? Like I said, am I supposed to be taking this show seriously?

— So some administrator shows up and takes a look at the 120 sorry suckers in the room. As a result, he throws another test at them (yay…). If you can somehow pass through this… water-like substance, then you pass. Apparently, this substance gets thicker and thicker at higher levels, so this is a good way to filter out the scrubs. Alright…

— Our hero, however, is magically unaffected. Yay for winning by default. He gets to win by default, because it’s exposition time! While everyone else is busy literally slamming their heads against the wall, Bam gets to sit and chat with the administrator. The problem here is that the world-building isn’t even… I dunno, intriguing. All I get is that the tower is divided into three structures, and individuals like Bam are Irregulars because he wasn’t chosen to enter the inner tower. But beyond that, there isn’t any interesting lore.

— Right before the exposition dump comes to an end, the administrator gives Bam an ominous warning. All that exposition, but you won’t explain what you mean here, huh?

— All the special people eventually pass through the barrier. This includes Bam’s newfound allies. Not that this means anything to me, of course. I barely care about Bam’s fate, so I certainly don’t care about the rest of these people.

— And well, that’s it. That’s the episode. I guess we can come back next week to see what other zany challenges our hero will need to overcome. But personally, I found this episode kinda boring, so I’m not exactly looking forward to see how this plays out. It just feels like something you might casually read on the train on the way to work because there’s nothing else to do.

6 thoughts on “Tower of God Ep. 2: I already want to renounce God”