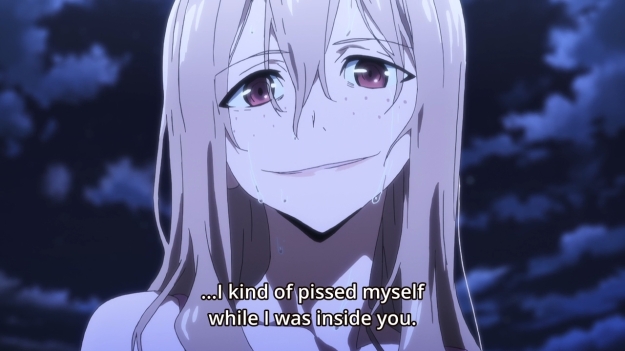 Man, this is just sex with extra steps.

— Gleipnir kicks off this week with a quick look into Hikawa’s past. She was on the track team (and probably still is), she wasn’t doing so hot, she found a coin, so she wished for better legs. Unfortunately, the vending machine and its weird inhabitant is kinda like the fabled monkey’s paw. Hikawa got what she wanted, but she now also has the ability to turn into a beast. Like Shuichi, she wants no part of it. Since then, she has been frantically searching for another coin until she overheard Clair — can I just add an ‘E’ to her name ’cause it’s seriously bugging me — showing one off to Shuichi. How lucky for her and unlucky for them.

— Back to the present, Hikawa is obviously going to kill both Clair and Shuichi. Even in her flashback, we could see that she wasn’t a very good person. She was consumed by jealousy, and she would often take her anger out on her juniors. She didn’t physically do anything to them, but that in of itself is meaningless. Lots of people don’t hurt you, but that is only because they can’t. People might not do bad things because they are bound by the law and not because they know that what they’re doing is wrong. In any case, the story is priming you for Hikawa’s death.

— Shuichi, however, is like a lot of anime protagonists: he’s hesitant, scared, full of anxiety, so on and so forth. So instead of defending himself, he just picks Clair up and runs away. Nah, if anyone’s going to kill Hikawa, it’s going to have to be Clair. After all, she has already tried to take a life. Granted, it was her own life, but you know what I mean.

— All of this is fine on paper, but some of the execution leaves me wanting. For instance, Shuichi asks, “H-How’d you know she was an enemy?” I dunno, maybe the part where Hikawa broke into someone’s home then screamed, “You bitch! I’ll kill you.” That’s usually what enemies do, my dude. Shuichi then follows that dumb question up with, “You had the pepper spray ready!” I mean, I wish it wasn’t this way, but I feel like most girls should have pepper spray within arm’s reach. But I won’t get into it.

— It doesn’t take long before Clair takes notice of the zipper on Shuichi’s back. She’s curious to see what’s on the inside. She then goads the guy into letting her unzip the fursuit by suggesting that she might even find his true power on the inside… whatever that means.

— But there’s nothing in there! It’s just one gaping, fleshy hole… a fleshy hole that you might wanna penetrate. Wait, what?

— Shuichi starts to despair, because this totally means that he’s empty. I dunno, that’s an odd reaction to me. Why does anything need to be on the inside? Why can’t he just be the fursuit? Well, okay, he doesn’t want to be the fursuit, so this is his way of rejecting himself. I wouldn’t want to be a fursuit either! But still, what I’m trying to get across is that just because the fursuit is empty, it doesn’t mean that he himself is empty.

— Alright, time for some raunchy-ass sex. I mean, just look at these lines… the author wasn’t even subtle about it: 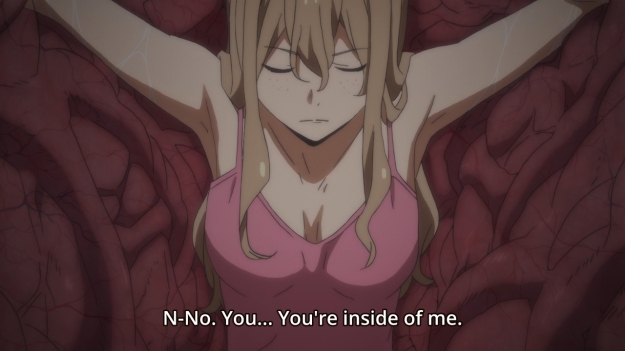 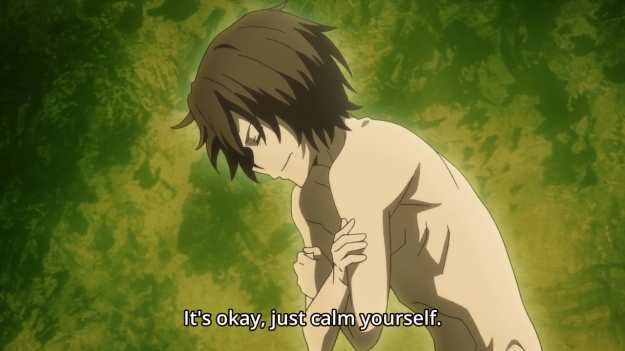 Hell, before she even climbed in, Clair fingered Shuichi’s insides. You can’t skip foreplay.

— Girl penetrates guy, guy has an orgasm — standard stuff, really. Then once they are fully connected, they finally acquire the sort of intimacy that only a close couple would have. He understands a bit about her, and vice versa. Shuichi also gets to see one of Clair’s important memories. Kinda funny how the best way to understand each other is to do what a lot of people in Japan are apparently not doing.

— Together, they can beat Hikawa. It’s kind of a thesis, antithesis, and synthesis kinda deal. Shuichi is strong in a couple ways, but he has such a weak will. We know from the first episode that he’s really smart. In fact, he’s at the top of his class. He should have gotten the principal’s recommendation. But instead, he turned it down because he wanted to hide within the normal. It’s the same thing with the fursuit. All this physical strength and speed, but the boy doesn’t know what to do with it unless his instinct to be a white knight kicks in. Otherwise, he simply wants to run and hide.

— On the other hand, you have Clair, who has no special abilities whatsoever that we know of. But she’s determined as hell. When she wants to do something, she does it. She’s even able to kill herself, and she would have had Shuichi not intervened. So together, they become whole… kinda.

— Because ultimately, Shuichi is just handing his agency away. He doesn’t really solve his anxiousness and indecisiveness by forming a union with Clair. He is just giving the keys to someone else.

— And with her newfound strength, Clair proceeds to mercilessly pummel Hikawa. When the latter refuses to answer any of Clair’s questions, our heroine uses the fursuit’s gun and ends her attacker’s life. Well, I guess she’s the attacker now. Naturally, we hear Shuichi begging Clair to stop. He sounds powerless, but I don’t know if he truly is powerless. Maybe he could’ve taken back control from Clair if he really wanted to, but y’know… weak will and all that. In some sense, you could even say that this is a yet another example of him running away. By acquiescing to Clair, he can avoid accepting responsibility for the situation. He can pathetically curl up into a ball and cry all about how there was nothing he could’ve done to prevent this. Luckily, the story already primed us to dislike Hikawa, so whatever.

— And of course, the afterglow.

— What happens afterwards? Well, I assumed they buried the body somewhere. You can’t just leave Hikawa’s corpse out in the open for people to find. Shuichi and Clair then lay low for a while until she decides — and I’m sure she’s gonna do most of the decision-making between them — to reach out to him. 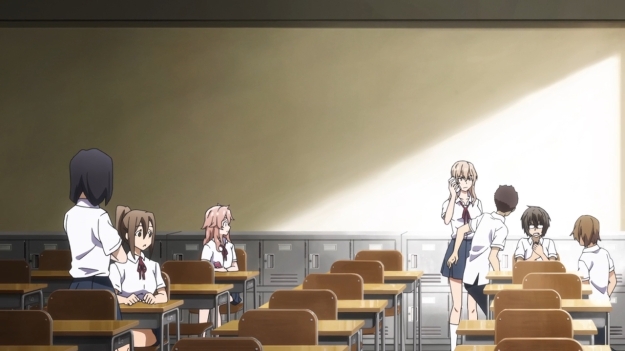 — Still, my cynical ass can’t help but feel that this is also a shameless fantasy fulfillment scenario where the hot girl inexplicably takes an interest in the nerdy loser. Those are pretty common, after all. You even get a scene where Clair walks up to Shuichi in class, and as a result, she makes their “relationship” official to all of his friends. Oh yeah, he totally doesn’t want this, you guys. Hot girl claiming me in front of my buddies? Ohmygod, so embarrassing.

— Meanwhile, Shuichi says the usual anime protagonist stuff like, “It doesn’t bother you?! You killed someone!” Still, this is fine. This is far better than a certain other show where another protagonist suddenly tells himself that he needs to take a life without even deliberating about it. Shuichi still has his morals intact.

— Clair can’t really do anything without Shuichi’s powers, so she has to get him to trust her. This means making herself vulnerable. First, she reveals what she’s after. Apparently, her sister Elena had turned into a monster and killed their parents. Since then, big sis has gone missing. Clair had no way of finding her, because she was powerless. But obviously, everything changes with Shuichi in the picture. You gotta wonder, however, if big sis had a good reason to kill their parents. After all, you don’t lose your mind when you transform, and I doubt she killed them for a coin.

— Second, because she is powerless without him, she might as well be dead if he ever dies. And again, she would’ve been dead without him. To prove her point, when Shuichi suggests that he might want to die now, Clair goes and tries to jump to her death. Naturally, Shuichi’s instincts kick in once more. If he truly doesn’t want to fight and kill, he could just let her go. He could free himself from whatever mess she’s going to drag him into. You could even argue that he’s respecting her wishes by letting her die. After all, she has now tried to kill herself twice. But in the end, Shuichi just can’t help himself… like how he couldn’t help himself when he pulled down her panties in the first episode. Sure, sure.

— Right before the credits roll, we see a girl making a wish to the weird vending machine dude. She doesn’t have a wish for herself, though. She is apparently obsessed with Shuichi. Or rather, she was. It’s yet another flashback. Anyways, she has that stupid bear for an accessory. And she claims that she wants to be with Shuichi forever. Our hero knows nothing about the coins. Unless his memories have been erased, he has no recollection of ever making any sort of wish that might have given him his fursuit powers. We also know that the weird vending machine dude never gives you exactly what you want. There’s always some drawback that you probably didn’t expect. So maybe the girl is now forever with Shuichi, but she can longer even express herself. Ah well, I’ll just wait to see what next week’s episode will reveal.

— Is this an interesting show? Kinda? And even then, maybe only for now. I’m probably being too pessimistic, but we should take Clair’s words to heart. Other people are going to come after them, and this only means one thing: more and more battles. If the show can focus on the relationship between Clair and Shuichi and all of the related sexual baggage that comes with their kinks, then I might not get too bored. But if it’s gonna be one long series of fights with escalating power levels, then it’ll be just another bog standard anime. Gleipnir finds itself standing at a crossroads.

14 thoughts on “Gleipnir Ep. 2: A not-so-subtle cry for intimacy”