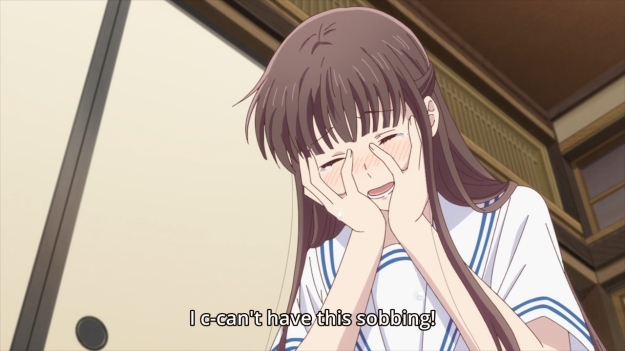 — It’s time for everyone to submit their career plans, but Tohru tells her friends that nothing has changed for her. She still intends to get a job in order to support herself. Arisa then suggests that our heroine could always marry one of the boys and not work. Mmm, progressive. Besides, doesn’t the tsundere always win?

— So as you can guess, this episode is all about future plans and aspirations. For the Sohmas, however, they are magically under Akito’s thumb for reasons that have yet to be fully revealed, so some of them, i.e. Kyo, can’t even dare to think about what they really want to do. Others have a little more hope, but that hope can be dashed by any point if Akito feels threatened. I guess this is something that future episodes are gonna have to explain to me. Being the head of a household is one thing. Being able to completely boss people around and dictate their future is a bit ridiculous, no? Why would the rest of the family tolerate this? I just can’t wrap my mind around that fact. She must have some sort of control over them that isn’t readily apparent.

— Anyways, Tohru and Kyo pay Kazuma a visit, and like always, the men are useless when it comes to preparing food. Guess who gets to do all the cooking? It’s the girl! Sure, Kyo helps, but it’s kinda lame, isn’t it? Having to cook even though you’re a guest? But Tohru is Tohru, so she’s always delighted to do things for others. She’s always delighted to spin every situation in the most positive light. When Kyo and Kazuma have a disagreement, she still beams with happiness. Even when she gets smacked, she smiles. I guess this mentality is the only way she’ll ever be able to solve the Sohma’s problems. She has to be this super positive force of nature that can’t be denied. The clouds of negativity will simply dissipate before her radiance.

— Guess what they’re making? It’s anime’s favorite food (because good ramen is too time-consuming to make)!

— At one point, Kazuma has to leave and have a talk with Kyo’s actual father. Here’s where the whole bad parent schtick rears its ugly head yet again in this series. Kyo’s father is concerned that his son will soon graduate and thus be able to roam freely. ‘Cause y’know, cat = bad. He blames Kyo for his wife’s death, and he hopes that Kazuma will help them confine the kid when the time comes. Obviously, bad parents exist. But like I’ve said before, with Fruits Basket, it feels like there are bad parents in every nook and cranny. Digging a hole for treasure? Oh look, there’s another bad parent. Shoot down a balloon that is carrying a present? A bad parent! Trying to catch a rare fish? Yes, you guess it! It’s a bad parent! Kyo’s father is yet another example. And when you use this same idea over and over, the audience grows numb to it. At least, I do. I feel like I can’t even feel as bad as I should for Kyo, because I’ve seen this sort of thing so many times already in this series.

— There’s nothing more to say here other than that Kyo’s father is obviously the true monster (ho ho ho). The only part I like is when Kazuma goes, “You are no parent of his, so you will never understand.” It’s not an original thought, but it bears repeating. People get really hung up on blood and blood ties, and this antiquated mentality allows toxic families to entrap people. I know people in real life who have been hurt over and over by their families, but they still come crawling back to them for more punishment.

— Plus, Kazuma’s statement sets the stage for the eventual “showdown” against Akito. She may be the head of the family, but so what?

— After hanging out with Kyo and Kazuma, Tohru has a brief encounter with Momiji. It’s the same deal with him. He has an idea of what he wants to do in the future, but he might not be allowed to do it. Yuki is likewise in the same boat. You kinda see this sort of thing from time to time in real life, though. For example, maybe you want to choose your own major, but your parents say they’ll disown you if you don’t become a doctor. Y’know, something like that. Fruits Basket takes this common family dilemma to its utmost extreme. Imagine getting locked up in a dark room just because you want to be an artist or whatever.

— When Tohru asks Kyo later if he intends to take over Kazuma’s dojo, he has to spell it out for her. Not only does a Sohma not get to decide what they want to do, he’s also the family pariah.

— Kyo, however, quickly turns things around on Tohru. I guess she’s somewhat cat-like. People often say it’s hard to tell if a cat is in pain, because they tend to hide it. Tohru always tries to be cheerful and upbeat, so she is hiding the fact that she too is worried about the future. She doesn’t have it all figured out, because few teenagers do. What follows is yet another crying session as Tohru opens up about her anxieties.

— I should be more sympathetic, but I just feel like Tohru is almost too perfect for her own good. Even her flaws are something like, “She hides her worries from the people she cares about.” What a monster.

— Then Shigure pops his head in and gives this silly laundry analogy that basically boils down to, “Just take it one step at a time.” I guess people need to be reminded every now and then that Rome wasn’t built in a day.

— In the end, everyone in the household eats somen together. Man, I could go for some of that. Goddamn this quarantine.