— I always knew that canines had a keen sense of smell, but when Shirou takes a whiff of Michiru’s student ID, he can actually look into her past. He can see how she used to be human, how her best friend was the first to transform, and then it happened to her. Wow, what a bizarrely powerful nose. I suppose this is a convenient way to help him understand that Michiru is telling the truth without having to do any sort of extra sleuthing on his own.

— Anyways, this week’s episode introduces us to Sylvasta Pharma. They have a rather unique-looking building, don’t they? I wonder how you would even construct something like that. Plus, I usually don’t expect a medical center to look like an evil mastermind’s lair.

— After determining the veracity of Michiru’s claims, Shirou decides to imprison our heroine inside her own room. He even takes great measures to ensure that she doesn’t get out. I guess I’m not sure if he stacked all that furniture against the door for comedic effect or if he actually respects her hidden abilities. I also don’t know why he needs to keep her confined. She passes as a beastman; even he didn’t believe her until he took a whiff of her ID, and nobody else (as far as we know) has his ability. It doesn’t really matter anyways, because the mayor will soon show up and lend the girl a hand.

— Rose has a new job for Shirou. Apparently, bombers have been targeting Sylvasta Pharma under the pretense that all this money and technology shouldn’t be wasted on beastmen. Y’know, that makes me wonder if the entire human world are bigoted. Is Anima City the only special ward for beastmen on the entire planet?

— In this week’s episode, Michiru magically gains a couple more extra abilities. One of them is the ability to yell super loud. She’s just full of surprises.

— So thanks to Grandma Gran, Rose already knows all about our heroine. Michiru thinks that the medical center might have a cure for her condition, so she also wants to help out with the case. For some reason, the mayor agrees. I think that’s kinda weird. Isn’t Michiru still just a kid? A kid in high school, but still a kid. Plus, she has no training whatsoever in doing this sort of thing. She has all these abilities, but that doesn’t mean she knows how to protect herself against bad guys. Why would the mayor just agree to this?

— Nevertheless, Shirou has to listen to Rose’s orders for reasons that the story won’t get into now. He then takes a second to give us some background information on Sylvasta. On the surface, they claim to support the idea of equal rights for beastmen, but at the end of the day, a company’s a company. Their primary concern is to make money, so one should always be wary of Sylvasta’s intentions.

— Shirou takes one whiff of the bomb fragment and determines the location of every single bomb in the city. Again, what a nose.

— While he and the police are busy working on diffusing the six bombs hidden bombs, Michiru and Kuro follow a truck headed for the medical center. As far as I know, Kuro is just a bird. I know crows are pretty smart, but this one seems pretty special in its own right.

— Anyways, by tagging along with Kuro, Michiru sees evidence of shady dealings. The bombs were just a diversion. Unfortunately for the girl, she’s not trained to do this sort of thing. As a result, she has her ears hilarious sticking out as she tries to listen in on their conversation. Oh yeah, that’s the second power she shows off this week’s episode. But I mean, this is why I don’t understand why the mayor would let the girl join the investigation. Oh, a former high school student wants to put herself in danger? Sure!

— More importantly, however, Mimura, the Sylvasta researcher, recognizes Michiru. When he tells his partner Yaba about it, they confirm Michiru’s identity. I guess the company must have had a hand in our heroine and her best friend suddenly turning into beastmen. Why else would they even have Michiru’s photo in their database? I wonder why they would pick two random high school students. Or maybe it wasn’t random at all. We just don’t know why Michiru is so special.

— Michiru tries to call Shirou for help, but he doesn’t even have his phone with him. Seems kinda foolish, don’t you think? Maybe he didn’t expect the girl to actually stumble upon anything important to the case.

— The girl is backed into a corner, but luckily, Shirou shows up at the last second. Maybe he just has a flair for drama. But suddenly, a bomb goes off in the medical center.

— Shirou tells Michiru to head home because it’s too dangerous, but she refuses. She then argues that since she’s a beastman, then he should protect her because he swears to protect all beastmen. Um, okay? That’s why he told you to go home. Going home protects you. But apparently, Michiru’s silly protestations actually work on the wolf, so he lets her accompany him. I don’t get it, man.

— While Shirou investigates the site of the explosion, Yaba reports to Sylvasta’s president. Boy, he sure does look like the typical rich bad guy of a worldwide conglomerate.

— It doesn’t take long before Shirou confronts the researcher. The wolf couldn’t smell anything about the bomb, but the lack of a scent itself is still damning. With no excuses for his actions, Yaba resorts to violence. 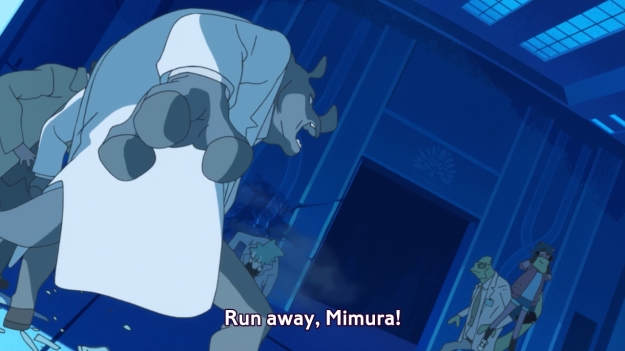 — By himself, Shirou could probably handle this case no problem. Unfortunately, he inexplicably agreed to let Michiru accompany him. As a result, Mimura manages to sneak up behind them and take the girl hostage. Look, I know that Michiru can eventually become useful. With all her abilities, she can one day complement Shirou’s raw strengths. But she doesn’t actually do much in this week’s episode. Who discovered the researchers’ connections to the yakuza? It was Kuro. And even though the mayor suggested that Michiru could act as a messenger between the bird and Shirou, this didn’t even pan out! The only thing she can contribute to the case is providing testimony about how she saw Mimura working with the yakuza. But this already happened. She doesn’t need to still be here and thus get taken hostage.

— Shirou goes after Yaba first while the rest of the police follows Mimura. Like before, if Shirou deems you a disgrace to all beastmen, then he will destroy your pride. So to punish Yaba, he shatters the rhino’s horn. I know I’m not supposed to feel bad for criminals, but I do think the wolf is being a bit excessive. His job is to protect the city, not mete out punishment. Plus, there’s no evidence that his actions have deterred other criminals. As a result, when he breaks a deer’s antlers or a rhino’s horn, I feel like he’s just doing it for his own satisfaction.

— Up on the very roof of the medical center, Mimura threatens to toss Michiru off the side of the building if the police doesn’t agree to his demands. The girl brightly decides to stretch her arms out and attack the lizard. What is her plan exactly? ‘Cause he has her dangling over the edge of the building. Hitting him means he’ll drop her, and that’s exactly what happens.

— But hey, wolf man swoops in and saves the day again. Apparently, his super strength means he can also endure hitting the ground at terminal velocity.

— In the aftermath, Rose drops by the co-op to provide some closure to the case. According to her, Yaba and Mimura were engaged in embezzlement, and they tried to erase all evidence of their wrongdoing. Still, I find it odd that they would resort to a bomb attack in order to wipe a few data systems. Y’know, there are better ways to accomplish this. Even if you don’t have the technological know-how to hack into the data systems and wipe them manually, staging a terrorist attack seems like a very messy option. But whatever, let’s just assume that bombing the fuck out of those mainframes was their only recourse.

— In any case, Rose promises to find a cure for Michiru’s condition. Apparently, the mayor used to be a geneticist herself, so she’ll use her ties with Sylvasta to find a cure. Shirou, however, warns the mayor that the conglomerate shouldn’t be trusted.

— And sure enough, we see the president of the company make plans to drop by Anima City right before the credits roll.

— That’s exactly how an evil mastermind would pose.

— I still think Brand New Animal is an interesting and dare I even say fun series to watch. The show has a nice pacing to its storytelling, and I’m interested to find out why Michiru was turned into a beastman. But having said that, some of the characters’ decision-making in this week’s episode were kinda silly.