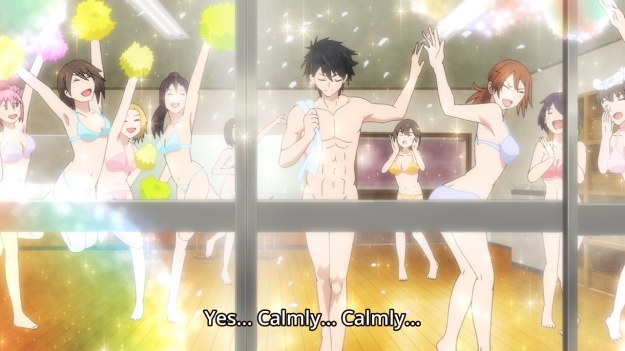 Whenever you watch Plunderer, you have to resign yourself to the fact that at least five minutes of every episode will be wasted on fanservice. Once those five minutes are up, we can finally tell the story… through exposition and exposition alone. Enjoy!

— So like I said, the start of the episode is all about Licht peeping on the girls. But for some bizarre reason, they don’t know that it’s him. Not only do they have to try and catch the perp, they have to do so soon. If they don’t, the whole class gets punished. ‘Cause that makes sense. Girls, if someone is violating you and you can’t identify them, it’s really your fault. ‘Cause, uh, it’s soldier school and soldiers gotta be strong or something like that.

— In the end, Class A switches the signs on the men and women’s baths. This allows them to identify Licht as the peeping tom, but he still manages to squirm away. They technically caught and identified him, but because one of the teachers ultimately apprehends Licht, Class A gets punished. Shhh, I think they just wanted to punish Class A no matter what.

— Also, Jail can apparently mindlessly walk into a room full of naked women without them screaming at him. He can even call Lynn fat and just shrug it off.

— So the kids are forced to try and survive out in the wilderness. Unfortunately, Licht still tries to perv on his female classmates. Eventually, one of them gets fed up and says she doesn’t have the luxury to act like a generic anime girl. So she starts stripping, since this is what Licht badly wants. Um… about that logic…

— The pervy mood is spoiled, because Licht is reminded that his classmates are taking this soldier thing seriously. Blah blah blah, they have no choice. They have to fight or they’ll starve, yadda yadda yadda. It’s just yet another classic case of anime violating the principles of “show, not tell.” We’re told over and over that the world is in a bad place, but we rarely get to see what’s going on outside the school. It’s ineffective storytelling at its best. These children are trying to make the weighty decision to become a soldier, and there’s no gravitas to this scene because exposition is often the only way that anime knows how to convey its narrative.

— Anyways, Schmelman quickly shows up and proposes a pipe dream: Class A can become an army that doesn’t have to kill. Really? How?! Y’see, if you become super duper strong, no one would dare pick a fight with you! It’s that easy! And just like that, Class A shows their collective naivete by going, “Hell yeah! Let’s become super strong so we never have to kill!” Too bad the audience already know for a fact that Licht ends up becoming an Ace with a body count in the millions. 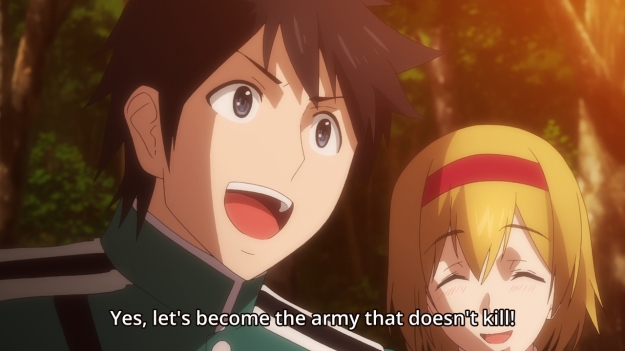 — I’m not, of course, saying that the show doesn’t have a point about how strength is ultimately a poor deterrence. Not only can you not prevent your opponents from catching up to you in strength (see: nuclear weapons), people are still gonna go to war anyways. All that strength is ultimately ineffective because A) you either use it and kill millions or B) you don’t use it because it can kill millions so no one is scared that you actually have it (see again: nuclear weapons). But the way that Class A reacts to Schmelman is so stupid, it actually detracts from what the story is trying to say.

— Jail follows Schmelman into an underground lab where they’re doing all sorts of twisted experiments. First, they’re trying to duplicate Ballots, but do they even know how real Ballots actually work? How can you recreate something that you don’t fully understand?

— Second, Schmelman and his team are currently working on the Aces project. Unfortunately, it’s not panning out so well. Test rats show increased aggression along the lines of… oh, I dunno, murdering everyone around them. Nevertheless, Firenda suggests that this side effect might only occur in rats because they have small brains! So c’mon, let’s quickly experiment on actual human subjects. Lady, aren’t you supposed to be intelligent? That’s not how research works!

— Oddly enough, Schmelman quickly rejects her idea. He actually wants to protect the children. So in 300 years, he goes from kooky but caring instructor to kooky but murderous dirtbag. Hmm.

— In any case, they decide to test one of the duplicated Ballots on the Ace rat, so we get to see a small rodent go berserk with shounen powers. Welp.

— All these revelations shock Jail to the core, so he’s having a bit of a breakdown. That’s when Past Nana shows up outta nowhere and leads him to safety. You know what that means! Yup, more exposition time! Why give us a good story when a little girl can just tell you everything you need to know in her featureless room?

— So what do we learn? Past Nana received a letter from Future Nana, so she knows that Jail is from the future. Nana is the first Ace, and she can time travel. Furthermore, dudes like Schmelman can naturally draw out powers from the Althing without the use of a Ballot, so they tried to plant his DNA in kids to create an army of badasses. I guess this makes Schmelman kinda like their dad. Unfortunately, Nana is the only survivor at this current moment. Yay, exposition!

— Nana then gives Jail a memory card that should contain even more exposition. I can’t wait until he sees what’s on it!

— Before Jail leaves, he tries to convince Nana to come with him. The girl, however, is afraid that doing so would change the future too much. Um, isn’t that the point? So change it a little, but not too much? Because why? Because the shitty world we saw in the first ten or so episodes is something we hope to preserve? 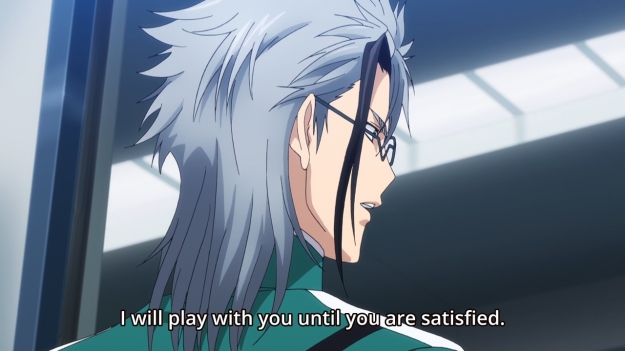 — In the end, Jail agrees to leave without Nana, but he promises that he would play with her in 300 years… when she’s more than a fully grown adult. Okay, dude, just admit you’ve got a bit of a bar girl fetish. Plus, she’s 300+ years older than him, so she’s also an oneesan!

— Right before the episode comes to an end, Jail gets caught by Instructor Grigorovich. Ain’t nothing serious is gonna happen to a major character like him, though. Kind of a pointless cliffhanger.