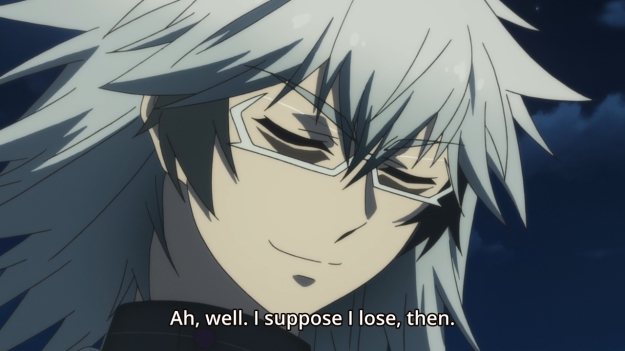 Honestly, I completely forgot about this show until the final episode dropped tonight. I was ready to settle in and play video games, too. Ah well, may as well get this out of the way now.

— All of Franklin’s plans have failed. He’s up to what now? Plan E? Plan F? Well, her latest gambit was to unleash a giant, murderous bug in the middle of the coliseum. Thanks to some dude sitting in the stands, however, the bug dies before it can even escape from the ground. Alright then. I guess Franklin has utterly no friends left.

— Eventually, Ray shows up to confront Franklin. More specifically, our hero wants to know what Tians mean to the evil mastermind. To be honest, I didn’t expect Franklin to claim that this world is too real to be a game. After all, I’ve been saying all along that if Tians are just as human as you or I, then Infinite Dendrogram never should’ve been made into a game to begin with. You don’t toy with people’s lives like that.

— But Franklin actually doubles down. She tells Ray that even if actual human lives were at stake, she still would have done the same thing. Why? Because she’s tired of people interfering with her life. Okay, let’s back up for a minute. According to Franklin’s backstory, she ran away from home because her father tried to marry her off. Her father also looked down on her being a clay sculptor. Apparently, women of high society don’t play around with clay. Okay, I get it. Not having any agency sucks balls. But you don’t typically turn around and kill people just because your daddy was mean to you. I hope Franklin is just exaggerating to get on Ray’s nerves. Otherwise, she’s certifiably insane.

— Anyways, Ray actually pulls a fast one on the villain. Him questioning Franklin was just a way to distract her long enough for Marie to save the princess. And once the princess was safely secured, Ray charges in to defeat Franklin once and for all. That’s when Hugo shows up to defend her sister. Aw, how sweet. Too bad your sister just confessed that she would kill actual people if it meant she could win.

— I’m not sure what I’m supposed to take away from this final battle between Ray and Hugo. Hugo doesn’t agree with her sister’s actions, so she’s defending a remorseless terrorist because… they’re family? Because she thinks this is what knights do? I feel like chivalrous people would do the right thing regardless of sentimentality, but I could be wrong on that. I’m no experts on knights.

— Nemesis tells Ray that he’ll need to get his damage counter up in order to use that corny ass “Vengeance is Mine” skill. C’mon, you gotta admit that it has a terrible name. So anyways, Ray comes up with a plan: he’ll sacrifice one of his own arms in order to put enough counter damage out. This might have looked cool if the animation was up to snuff. But the budget and/or talent just ain’t there, so this is what we get. Look, they’re doing their best, okay?!

— In the end, Ray grabs Nemesis with his mouth and pierces through Hugo’s mecha. Man, virtual teeth must be hella strong. I feel like I’d need dental work if I tried a stunt like that in real life.

— With Hugo out of the way, Ray runs up and simply punches Franklin. I guess I kinda like that. Franklin is an evil mastermind who put all of her eggs in one basket: she creates stuff to do the fighting for her and that’s all she can do. She’s absolutely useless in direct combat. And with her death, the terror attack on Gideon is officially over.

— The second half of the episode is one long denouement. For example, Ray is told that there is only one person in the kingdom who can heal his missing arm. But uh, there’s apparently something dangerous about her? I dunno, that’s just the impression I get from the characters. As a result, Ray says that he’ll just stick with one arm for now. If he needs to, he can still hold Nemesis in his mouth. This makes his sword blush.

— To the show’s credit, Ray is an isekai protagonist who isn’t actually drowning in virtual haremettes. I can’t remember the last time Nemesis blushed around him. Maybe when he was cleaning her sword form in the second or third episode? Other than that, there has been virtually nothing that can be interpreted as remotely romantic between them. And similarly, we have yet to meet a girl who fawns over Ray. Franklin is the only person who obsesses over him, but not exactly in a loving way.

— On the flip side, the ingredients are all there. Maybe we just haven’t gotten to the harem bullshit because the adaptation is only a single cour. There’s still a chance that a harem ends up coalescing around Ray anyways.

— We also see these powerful Masters eat and have a discussion in order to wrap up some loose ends. I’ve mocked this show for its obsession with having its characters engage in long, dry conversations around the dinner table. But I suppose they haven’t had the chance to eat in over a month’s worth of episodes, so whatever. Knock yourselves out, guys.

— I found it funny that Xunyu is drinking a non-alcoholic drink because she’s underage. Dude, it’s a game. Is there a law against kids playing adult characters and drinking pretend alcohol?

— Finally, Franklin boots Hugo from the guild. To her sister’s face, she makes it sound like this is a good thing. She tells Hugo to go out and see the world. Experience new things! Learn as much as you can. After all, Hugo is apparently only 14 (she is turning 15 soon). Yeesh. Plus, I find it weird that these two sisters are having a heart-to-heart conversation within a game. For Christ’s sakes, can’t you guys just Skype or Face Time on your phones? If you have the tech for VR MMOs, then you certainly have video chat.

— After Hugo leaves the room, Franklin reveals her true colors. She feels that Hugo is the last thing holding her back. With her imouto around, she feels obligated to show her softer side. By kicking Hugo out of the guild, Franklin can now go balls to the wall. After all, she hates losing. Gosh darn it, she’s totally gonna beat Ray one day!

— Alright, let’s revisit Franklin’s backstory again. This’ll be the last time, I swear. Look, she ran away from home because her father sucked. Now that she’s a free bird, the world is her oyster, right? She can do whatever she wants. She can pursue whatever she wants. And what she wants to do is obsess over some rando in an MMO? An obsession that is borderline yandere? Girl, c’mon. What are you doing with your life?

— Elsewhere, Ray challenges Marie to a duel. Oh, he’s still missing an arm, but he wants a fair fight against the woman who ganked him. He has no chance of winning, but he’ll never give up, yadda yadda yadda. It’s Ray the Unbreakable. Great.

— Right before the episode (and thus the series) comes to an end, we snap back to the real world. Ray logs off because he needs to work on his college applications. Right after he leaves his apartment, he crosses paths with a cold, blonde woman who barely responds to his greeting. Um… is that supposed to be Franklin (a.k.a Francesca) in real life? Wonder what she’s even doing in Japan…

— Oh well, that’s Infinite Dendrogram for ya. Does it deserve another season? Eh. I don’t think so. It seems like a pretty generic isekai. Every isekai protagonist ends up caring too much about the world they’re in, so Ray isn’t unique in anyway. So the only other thing that the series has going for it is this infinite possibilities thing, but that just amounts to seeing a giant crab fortress engage in combat against a sci-fi battleship. It’s not really that interesting; it’s just kinda gimmicky. Finally, the adaptation cut way too many corners to try and reach some arbitrary point in the story by the end of the season. If there’s ever a second season, I have no reason to believe why they wouldn’t just do the same thing. And if you’re going to put in the same effort, why bother? Put the spotlight on a new series instead. Even if, y’know, these isekai stories all end up feeling the same.