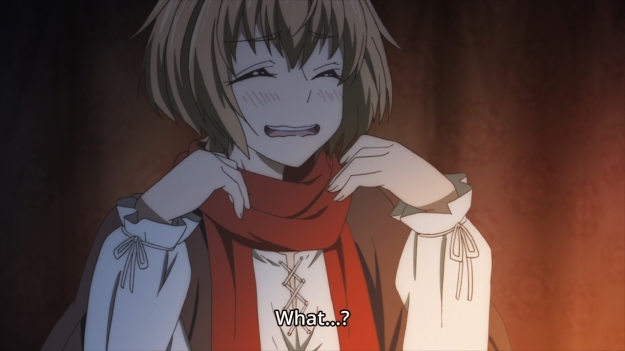 — I have to admit that I’m losing interest in this show solely because it keeps hinting at a potential romance between a 14-year-old girl and a grown man. Yeah, I’m close-minded about this and I don’t care. In any case, I’ll probably do shorter write-ups from here on out until my interest completely peters out.

— It’s a shame, too. Saturday shows ended up being pretty dull this season due to all the delays. Oh well, that just means more time for video games.

— In the first half of this week’s episode, Leo has Arte dress up as a boy in order to sneak her into a hospital. During a Carnival with a capital “C”, the church allows people to dissect cadavers, so this is the only way to see all of the morbid, grisly detail of the human body. You could always murder someone, but y’know, that’s a no-no.

— Naturally, Arte isn’t the least bit squeamish. She’s so enthusiastic to sketch that she tries to push herself to the front of the crowd. In the process, she loses her hat and thus reveals her identity. Leo ends up having to throw the girl over his shoulder in order to escape from the angry horde of men.

— While in hiding, Arte finds herself in close proximity with a man who isn’t her father for the first time in her life. If this scene was merely played off as an opportunity to improve her observational skills, I’d be cool with it. But after blushing like a tomato, the girl soon feels a tightening in her chest. Uh-oh, you know what that means…

— In the second half of the episode, Leo gives Arte the opportunity to help him finish a painting. So off she goes with gusto! Unfortunately, every time she presents her work, he rejects it. This part of the story is a little frustrating, because neither of them will communicate. He won’t give her feedback and she isn’t asking for any! Goddammit, just ask him what you’re doing wrong!

— Eventually, Leo finally gives Arte a clue as to what she’s doing wrong, so she realizes that she has been sketching backgrounds with too much detail. A portrait shouldn’t steal the spotlight from the subject, so she finally produces something a little more appropriate.

— Right before the credits roll, Leo has a few general critiques about Arte, but he rounds them out with something like, “Oh, but I prefer women like you over the ones who just do whatever men tell them to do.” So cue the blushing and all that jazz. Sigh.

— Considering how Kaguya comes from a super rich family, and Miyuki’s family is pretty much the direct opposite, my biggest fear is that we’re going to get an ending that resembles The Tale of Princess Kaguya a little too much. Kaguya’s family (the Moon people) will certainly disapprove of their relationship, so she and Miyuki will probably have to wait years before they can see each other again. If you’ve been reading this blog long enough, then you should know me pretty well by now. You should know that I prefer anime where characters defy their destiny. There are, of course, plenty of people who think that waiting years to see your lover is romantic. And to that, I say boo! Boo to you passive folks! Loving someone so much that you’d be willing to give your family the middle finger is much more romantic in my eyes! Oh well. If the Moon people do come, I hope Miyuki is true to his word. At the very least, don’t burn the goddamn immortality potion.

— Anyways, it’s still all about Miyuki’s birthday. In the first third of the episode has Kaguya desperately trying to befriend his sister, ’cause she wants to know what sort of birthday present to get. Unfortunately, the Fujiwara sisters are here to play spoiler. In fact, Chika’s younger sister’s overactive imagination might be even worse than her sister’s.

— I guess it’s common for siblings to hate each other? I wouldn’t know since I’m an only child. Contentious sibling relationships, however, are what you see over and over in stories, so I guess there’s some truth to it. As a result, Kei’s stories initially worry Kaguya a bit. Luckily, she eventually realizes that the president is the same no matter where he is.

— And like brother, like sister. Kei resembles her brother so much that Kaguya has some odd thoughts running through her mind.

— Honestly, I would’ve just taken Ai’s advice on what to give Miyuki.

— In the second third of the episode, Kaguya is finally alone with Miyuki, so she plans to give him both a cake and a present. Oh la la, so fancy. Hm… maybe a little too fancy. Personally, I’d still be thrilled to receive that much cake. I mean, what can I say? Cake is delicious (as long as it’s buttercream and not fondant), and it’d be nice to bring some home to my family.

— As a result, the girl puts herself on trial. Meet superego, ego, and id. Honestly, Ice Kaguya seems like more trouble than she’s worth. If and when Kaguya and Miyuki does get together, Ice Kaguya will probably be the last hurdle to overcome. She’ll come up with some reason to try and spoil the relationship. And therein lies the problematic word: “reason.”

— In the end, all Kaguya really had to do was cut out a small, modest slice (and hide the rest of the ginormous cake). Makes you wonder why Ai didn’t just prevent her from bringing the entire cake in the first place. Maybe once Fool Kaguya gets going, you can’t stop her. Or maybe Ai enjoys watching her friend make a fool out of herself. At some point, Kaguya is gonna have to fend for herself… unless these master-servant relationships are for life or something. I wouldn’t know; there’s no chance that I would ever find myself in that position.

— In any case, Kaguya also gives Miyuki a fan, a present which he is all to happy to receive. Wow, a fan? Goddamn, does he have a boomer’s soul or what?

— In the last third of the episode, Miyuki initially thought of exploiting Kaguya’s gift in order to make her confess her love. In the end, however, he thought better of it. Unfortunately, he didn’t realize that Kaguya is already two steps ahead of him. Chika ends up being the unwitting pawn in their silly chess match.

— There’s not much that I can comment on here without just recapping the events, so I’ll just say that it was cute to watch Kaguya get all flustered over Miyuki using her present.

My Next Life as a Villainess Ep. 3

— I kinda wish these kids would grow up already. I just don’t think the things they talk about match up with their age and appearance.

— Anyways, Catarina hits up yet another tea party. She proceeds to gorge herself like usual. She always eat until she needs to take a dump. I guess it’s kinda funny, because Catarina is far from the refined lady that she’s supposed to be.

— On her way to the restroom, she encounters a group of kids picking on Sophia Ascart simply because the girl has silver hair. Apparently, that makes her creepy. Then again, I watch anime, so I’m used to girls coming in all sorts of hair colors. Green and purple have got to be the silliest.

— At some point, Catarina can no longer hold it in, so she makes a grand entrance. This ends up scaring off the bullies. Hah, if only they knew she had to use the restroom. Still, our heroine might have inadvertently triggered a yuri flag.

— Man, even the adults are kinda off in this anime. All they do is stand around and comment on the beauty of some prepubescent kid.

— Catarina and Sophia become fast friends, and as a result, she also gets to know Sophia’s older brother Nicol. He’s supposed to have a sister complex, but that’ll probably change considering how nice Catarina is being to his sister. Meanwhile, Keith gripes at the fact that he now has even more rivals to contend with. C’mon, you guys are kids. How can you guys fall in love already? You’re only supposed to develop cute crushes! Puppy love! Nothing more!

— Anyways, I eventually get the timeskip that I wanted, but it’s anime, so I’m always a bit flabbergasted when I’m told that these mature-looking characters are supposed to be around fifteen. Did I look like that at fifteen? Hell no.

— Right off the bat, Geordo is already making his move. Considering how Catarina is his betrothed, I guess he’s allowed to be confident. Just don’t get too fresh.

— As for the other boys, they haven’t changed too much. Keith is over-protective, Alan continues to be a tsundere, and Nicol is the dark, mysterious boy.

— But none of them compare to your BFFs, so even the girls want to dance with Catarina. Man, our heroine has certainly rehabilitated her characters’ portrayal. All that’s left is to meet the Heroine. I’m sure she’ll also be charmed by Catarina. Everyone else is.

— It’s a harem, so it makes sense that they would all fall in love with Catarina. Still, I was hoping for more doom flag avoidance, y’know? Ah well, let’s see how far they go with this yuri thing.

2 thoughts on “Saturday Roundup Week 3: Arte develops a crush, birthdays are complicated for Kaguya, and Catarina adds yet another girl to her harem”