Of course, I find it weird that everyone appears to speak the same language in Los Angeles, but I guess we’ll just have to suspend our disbelief if we want to enjoy this show. Plus, if Appare-Ranman! was actually trying to be realistic, we’d have seen a whole lot of racism by now. In any case, this episode introduces Appare to the beauty of automobiles, which luckily ends up working out for Kosame. After all, they need money to get back to Japan, and the Trans-America Wild Race will pay out a ridiculous one million dollar prize — 1.51 to be exact. That’s like forty or fifty million bucks in our day and age, isn’t it? Certainly, you don’t need that much money to charter a trip across the Pacific. As a result, I kinda wonder if our duo will even win this whole thing. If they did, they’d be swimming in cash. But moving on, we also get to meet quite a few new faces in this week’s episode.

With Appare, you have to take the good with the bad. The kid does whatever he feels like without any consideration for others. He isn’t lazy when he’s pursuing his own interests, but he won’t lift a finger if the activity bores him. For instance, the odd couple needs to earn some money. Appare, however, lets Kosame do all of the work. Then after the poor guy spends all day earning a few coins, the entitled engineer goes and spend a good chunk of their to hit the races. On the other hand, Appare’s lack of common sense probably up inspiring a girl to break the glass ceiling. Our odd couple break into the racetrack because our eccentric engineer wanted to take a close look at a car, and in doing so, they bump into Jing taking one of the vehicles for a joy ride. She ends up nearly wrecking the race car because Appare just absent-mindedly walks onto the track.

Jing wants to be a racer, but naturally, sexism is rampant. As a result, she has to settle with sneaking onto the racetracks at night and flexing her driving skills when nobody’s looking. Common sense would tell her to give up on her dreams. Common sense would tell her to take over the family business and find a nice man to marry. But Appare doesn’t let things like common sense hold him back, so he flat-out asks Jing why she would let others decide her life for her. We already know that the girl will end up in the Trans-America Wild Race, so I guess our hero inadvertently made things harder on himself. Then again, true competitors usually want to go against the best, and Appare even acknowledges Jing’s skills. That’s nice, I guess. In reality, it’s obviously not this easy. Someone like Jing could easily get herself physically hurt if she tried to make this a real issue… especially back then. Luckily, this show isn’t really concerned with realism.

Right before the episode ends, Kosame tries to protect some kid from being killed in an alley, but when he tries to draw his sword, a painful trauma from his past suddenly haunts him. A new face ends up having to save both of them. I guess formal introductions will have to wait until the third episode comes along. 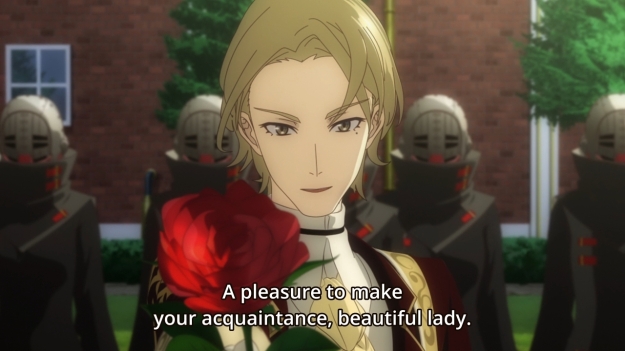 Uh-oh, here comes the bad guys. You can tell just from their uniforms. That outfit pretty much screams, “Look at me! I’m a villain!”

— Anyways, the Moscow Combat Revue is here to retrieve Klara. They’d probably be more successful if they didn’t look so goddamn ominous.

— What’s with the get-up? According to Valery Kaminski, the Moscow captain, “the girls were badly burnt and ended up like this.” But when Leyla, one of the girls in the Moscow Combat Revue, approaches Klara — we’ll find out later that she’s apparently Klara’s big sister — she removes her mask and looks perfectly normal. Alright then…

— So the Moscow Combat Revue captain is male… and the Imperial Combat Revue is also male. Is this just a small sample size or are all captains male?

— Klara is suffering from temporary amnesia, and she’s also scared of the Moscow Combat Revue for whatever reason (hint: they’re evil). As a result, our heroines instantly jump to Klara’s defense. Unfortunately, Russia > Japan. For now, anyways.

— Sumire, however, enters the room and after a short talk with Valery, an uneasy peace is brokered. He’s content to wait for an official order that will allow them to take Klara home. Speaking of which, my stupid lizard brain seems to have a hard time pronouncing the name “Sumire.” I can sound it out if I go slowly, but if I try to say the name fast, it just sounds wrong. Oh well.

— The next day, a demon attacks. Considering how the Moscow captain said it’d be boring to just sit around and wait, they must have had a hand in triggering this attack.

— It’d be nice if the show explained what the demons are and where they come from. I guess if I had played the previous games, I’d know all about the demons. Still, isn’t this meant to be a soft reboot of the series?

— Ultimately, this attack is meant to assert Russia’s dominance. They offer to help, but the girls want to defend Tokyo on their own. They might have been able to do so if Hatsuho hadn’t allowed her pride to get in the way. First, she’s jealous that Sakura is named acting captain in Seijuro’s absence. Second, I bet her ego is still bruised from being overpowered by Leyla. As a result, she repeatedly charges into battle alone.

— Just when tragedy is about to strike, the Moscow Combat Revue float down in their evil-looking mechas to save the day. I mean, c’mon… all black? Really? Does Russia even historically like the color black?

— Valery then warns Sumire that demons will keep attacking as long as Klara is with them. But when she asks him what he means by this, he plays dumb. C’mon, you’re not even trying to hide your villainy.

— But again, Russia > Japan. Japan’s motley crew has a lot to work on. More importantly, Sakura is gonna have to solve this Hatsuho problem. Usually, the military doesn’t look too kindly on any form of insubordination… especially if you put your own squad members at risk. But this is a made-up fantasy world filled with cute girls, so I kinda doubt Hatsuho will receive a harsh punishment. Hell, I’m not even sure if Sakura even has it in her to scold anyone. Like most anime heroines, she seems too nice.

— Obviously, when the stakes are low, you can tolerate people like Hatsuho. Let’s say these girls are on a basketball team, and one of them decides to iso repeatedly without any regard for her teammates. That level of arrogance might cost them the match, but whatever. It’s just a game. But she’s in the goddamn military. Along with her teammates, she’s the first line and maybe only line of defense against these weird monsters. You can’t afford a screw up like this when the stakes are this high. I wouldn’t go as far as kicking her out of the team, but I dunno… if she just gets a slap on the wrist in next week’s episode, that’s pretty pathetic.

— There was also that whole White Cape situation from last week’s episode where I thought Hatsuho came off sounding pretty dumb. So when you put that incident together with this week’s mess, our shrine maiden doesn’t look so hot right now. Obviously, she’ll more than likely get her redemption arc, but it’s gonna have to be one hell of a comeback.

Anyways, I decided not to watch Shokugeki no Soma for now, because I don’t wanna spend my Fridays watching four shows. I still have games to beat, and in two weeks, Sakura Wars will be one of them. Too bad more tolerable shows don’t air on Tuesdays. I pretty much have nothing to watch on that day.