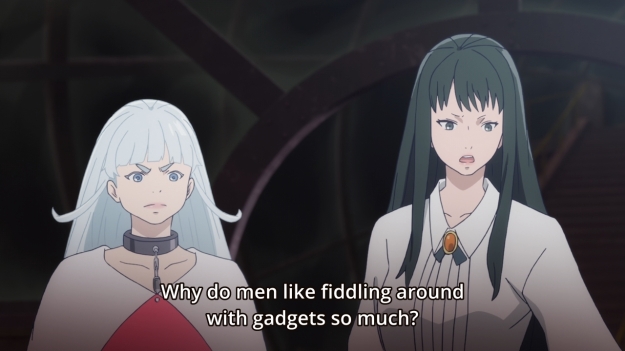 The answer to her question? ‘Cause it’s fun.

— A woman who has been tracking strange sounds in order to salvage spare Equipment ends up coming to Echo and Mu’s rescue. By herself, she is able to fend off the Three Witch Sisters, so I have to assume that she is very strong. She does so by using an attack with a very corny name. I guess Echo was right; Mu needs to name her ultimate attack for it to work.

— When Echo wakes up, he finds Mu staring at him with a mix of anger and frustration. The kid, however, is so happy-go-lucky that he immediately starts reviewing Mu’s recent defeat to the Three Witch Sisters. Echo is a strange boy. He doesn’t seem to have any typical worries that a normal person should have. After all, he and his partner was just attacked, and he doesn’t seem the least bit scared about that.

— On the flip side, Mu is scared. She’s scared that she may have dragged Echo into something very dangerous, so she tells him to just go home. I’m surprised that the mysterious girl with amnesia is the one with common sense. Usually, it’s the ordinary boy who tries to keep a duo grounded.

— Anyways, their savior introduces herself as Bilin Valentine. Her partner is Kevin Valentine. I think perhaps they’re lovers? I dunno, it’s never specified.

— Bilin gives us a little more information on what had happened back then. They tried to organize the music festival to end all music festivals, i.e. wipe out the Earless. But for some reason, Jimi Stonefree went rogue and things went haywire. We are not told, however, what he exactly did to make the Fest a failure. And naturally, we are not told why he went rogue. All we know is that his power could destroy the world, and Mu somehow inherited said power.

— Elsewhere, Echo starts working on his broken amp, but he doesn’t exactly have the parts to fix it. That’s when Kevin finally shows up to lend a hand. Apparently, he has shut himself away for the past four years. I guess hikikomoris exist even in this universe. Nevertheless, he tries to give Echo a bit of romantic advice. Bruh.

— Why did Kevin run away from the battlefield? He confesses that he got scared. His partner is willing to die against the Earless, and he couldn’t face that possibility. I dunno, I guess I understand… but if Bilin does end up biting it on the battlefield, wouldn’t he want to know that he did everything he could to prevent it? If he hides out in his room, he’ll probably just come to regret inaction. Oh well, the human heart isn’t always logical.

— Still, Kevin helps Echo realize why Mu is pushing the kid away. Likewise, Bilin tells the girl that a Player’s true strength comes from their conviction. Oddly enough, this same conviction is what scared Kevin off. I wonder if seeing the happy-go-lucky Echo, however, stirred up some boyish courage within him.

— Eventually, Echo fixes the amp and goes out to have a heart-to-heart talk with his partner. He tells her that he’s not backing down now. He wants to see the world with her. It’s strange. On the one hand, I’m glad to see that the story doesn’t dwell on the small fracture in the kids’ relationship. Usually, when self-doubt settles in, these characters can take more than episode to get over it. Echo, however, hurdles over this obstacle pretty quickly. On the other hand, he’s pretty hard to understand. He wants nothing more than to see the world with someone he just met? Hmm…

— Well, in that sense, Listeners comes across as a very romantic series. Not in the lovey-dovey sense, mind you. Rather, I’m talking about how the characters are motivated by their emotions and subjectivity. Reason takes a backseat as the characters are moved by their feelings. Logic didn’t keep Echo in Liverchester. He initially didn’t want to leave simply because he thought he was happy. And logic isn’t going to scare Echo away from Mu. He is inspired by their partnership, and now he wants to see the world with her regardless of the danger they’ll come across. So of course, it doesn’t matter that he just met her…

— Not only is the relationship between Echo and Mu repaired, so is the one between Kevin and Bilin (though it took them four years). As a result, the two girls decide to spar. During the battle, Echo comes up with a name for Mu’s ultimate move, and Mu finds her conviction. But I’m not really a big fan of the name; it’s not cheesy enough. Still, Echo made some tweaks, so now the Equipment can fly. That’s neat.

— In the end, Bilin defeats Mu, but it would seem that this is mostly due to the latter being green. She and her partner remark on the fact that Mu might even be stronger than Jimi… whatever it means to burn hotter.

— Still, the battles in this series can be pretty silly. When the two Equipments unleash their ultimate moves, all we get to see are two glowing orbs. Eventually, one orb overtakes the other, and I guess that determines the victor.

— Right before the kids leave on their grand adventure to see the world, Bilin gives them a quest: they should pay a visit to all of the remaining Players, because they each know things about Jimi that no one else does. Oh well, this was the original plan anyways. Echo had the exact same thought in last week’s episode though he was primarily motivated to learn more about Mu’s past.