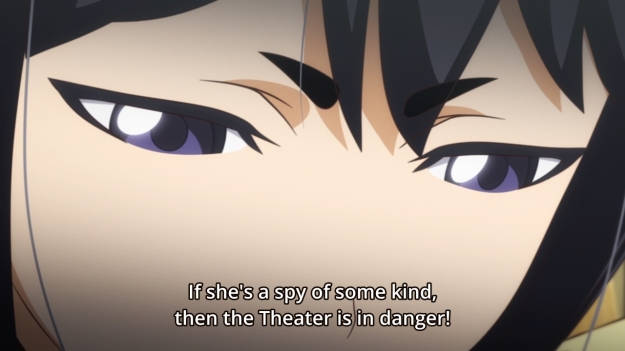 With Appare-Ranman! going on hiatus due to the virus, I really wonder if I’ll have anything left to watch by the end of the season. Oh well, onto yet another episode of Sakura Wars.

— I finally got my hands on the game yesterday. I’m partway into chapter 2, so I guess the anime series is a sequel of sorts. In the game, Seijuro has only just joined the team, and it’s in quite a disarray. The shows are a chaotic mess, and in general, and the team is considered a laughing stock in its own country. Nevertheless, Sumire wants Seijuro to whip the girls into shape so that they can win the Combat Games. Doing so will turn public opinion completely around. I could be wrong, but this feels like it would be the final event in the game. After all, chapter 2 is about just putting together a decent show, because the theater is about to run out of money. No, really. They spent a ton on Seijuro’s mecha, so they’re deep in the red.

— I’ll return to talk about the game once I’ve made a little more progress. For now, I’ll just say that it’s okay… it’s clearly a low budget game.

— Oh yeah, I still don’t really know what demons are or where they come from. I guess the game just assumes that you’ve either played the previous games or watched the older anime series.

— Anyways, the episode begins with Azami still being suspicious of Klara. She thinks that the Russian girl might actually have been responsible for the destruction of the Moscow Combat Revue. Why? ‘Cause of that one blurry ass photo from last week’s episode. I don’t think Azami is the brightest ninja. Hell, I don’t even think she’s a good ninja.

— ‘Cause she gets caught repeatedly just trying to tail an unsuspecting Russian girl. She even gets caught by her own target! Plus, I’m no special ninja, but try not to openly glare at the person you’re supposed to be spying on.

— Man, now I’m hungry even though it’s only 9am. That’s a lot of rice for a small piece of fish, though.

— Unfortunately, the first 60% of the episode doesn’t really have much to it. It’s really just one silly hijink after another. For example, the girls end up walking in on a naked Reiji.

— We also learn that Klara has been caring for a stray kitten on the roof. I don’t think that’s a great place to hide a small animal. Wouldn’t it get cold at night? Plus, cats need a litter box… but what do I know? It’s not like I own some fat idiot who screams for attention at 4am every morning. 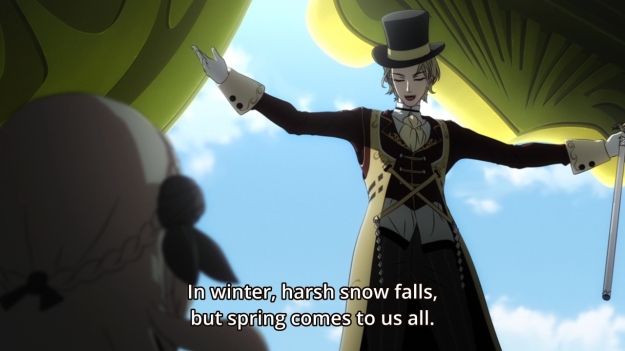 — Eventually, Valery shows up just to say a few cryptic words to Klara. The next time we see him, he continues to bug Sumire about taking the girl back to Russia. Naturally, Sumire continues to turn him down, so around and around we go. Hell, Seijuro is still away on a mission. This plot thread is going nowhere fast. I wonder if they thought that the game’s story would be too long to adapt. It’s funny, because I feel like this story might be stretched out too thin for the anime series.

— In any case, Azami continues to stalk Klara when a demon shows up outta nowhere. Well, I’m sure Valery had a hand in it.

— Azami and Claris take their turns trying to defeat it, but it’s obvious that they need their mechas in order to do any real damage. Unfortunately, those are currently out of commission. Reiji tries to play the hero, but you can tell that this episode isn’t trying to be very serious.

— Eventually, Klara lends a hand with her special ability, so Claris’s book magic (no, really) is strong enough to subdue the demon. I guess Klara is like an amplifier of sorts. Strap her onto your back and you’ll exceed your limits.

— In the confusion, Black Cape swoops in and kidnaps the girl. But right on cue, White Cape shows up and spoils his fun. And that’s it. It’s the same damn thing that happened in the second episode albeit much, much abbreviated. I dunno, man… the anime storyline just feels like its spinning its wheels. This is the fifth episode, but we’ve barely made any progress.

— Plus, why are these girls so weak if this follows the game? Shouldn’t they be competent by now? And yet, Black Cape pretty much embarrasses them every time he shows up.

— In the aftermath, Klara lets the girls visit her special spot, which is just a nice view of the city. Anime characters love nice views. Luckily, Azami’s curiosity has now been sated. She no longer believes that Klara is a spy. Great.