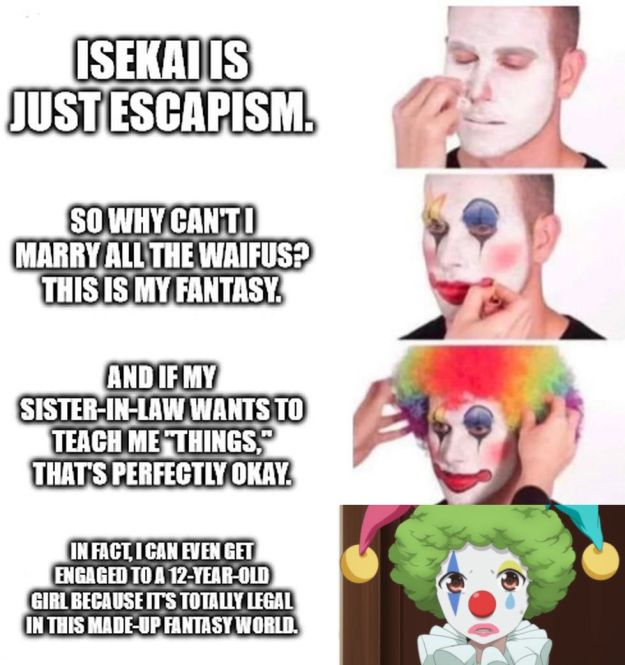 Imagine going to sleep as a salaryman and waking up to a 12-year-old fiancée! Even better, imagine being the clown who would write this sort of story.

— So the cardinal invites Wendelin over for a baptismal. Apparently, it’s a huge honor in this world. It’s such a huge honor that the kid offers up fat stacks of gold. After all, he’s not really a kid. Mentally, Well is well (no pun intended) into his 30s, so he should know a thing or two about what it takes to curry favor. Gotta kiss ass, man.

— When the cardinal’s granddaughter enters the room, the topic shifts over to her beauty, her aptitude for the oh-so-rare holy magic — gotta have a healer for your party! — and how every family is asking for her. Hm, I feel like I’m forgetting something… some very important detail… oh yeah, she’s only 12! Imagine pimping your own granddaughter out for power and influence.

— Now, you might say, “But wait, Wendelin is currently only 13!” Is he, though? Is he really only 13? If this was a standard fantasy anime, then yes, he’d only be 13. But this is an isekai. This is an isekai about yet another bored, lonely salaryman who needs to feel alive by escaping to a fantasy world. The only difference here is that not only can he marry all the waifus, he has to start collecting them at a young age. Good lord, at least My Next Life as a Villainess‘s Caterina was only 17 when she got isekai’d. It ain’t much better, but it’s not a 30-something dude creeping on 12 year olds while pretending to be wholesome.

— Plus, you can’t have it both ways. You can’t say that banging some magical 1000-year-old loli from whatever degenerate anime series is perfectly moral, and at the same time, pretend that Well isn’t middle-aged.

— Finally, I have a hard time believing that this is a 12-year-old girl.

— The best part is how Well isn’t really concerned about Elise’s age. Sure, in this universe, it’s common for families to marry their kids off at a young age. But our hero’s not from this universe. You don’t just lose your morals in six or seven years.

— Shortly afterwards, we find Wendelin dressing like a clown because he is one. But more specifically, he’s trying to avoid people from recognizing him on the streets. After all, his ass is scorching hot right now, and they all want to become his retainer. The guy from last week’s episode has apparently studied Wendelin’s dental records.

— Our exasperated hero ends up just appointing Er to be his retainer, because he’s got more important things on his mind. Things like chatting up his new fiancée. She might be the first, but she won’t be the last.

— Speaking of fiancées, Iina and Louise are dismayed to learn that Er has gotten ahead of them in the pecking order. They could also join him in becoming Wendelin’s retainers, but why stop there? So what’s the next best option? Apparently, it’s to become a concubine. These girls wouldn’t even dream of being engaged to him, because they are not of noble stock. Meh, I’m sure he’ll find a way to marry them anyways.

— Louise doesn’t hesitate either. She tries to perform the mating dance of her people, but the poor girl doesn’t have a seductive bone in her body.

— The sad thing is that Iina and Louise barely know this guy, so they’re in the same boat as Elise. They don’t desire a relationship with him because they actually like him. They’re pursuing him for their own gain. Oh, I’m sure all of his waifus will eventually fall in love with him for purely romantic reasons. But for now, their only intention is to use him.

— Oh well, at least these girls support each other? Louise sews together quite a skimpy lingerie for Iina. Gotta love it when your BFF has your back. “Look, if this guy wants to bone, he’s gotta bone both of us.”

— What follows is just Well getting to know his fiancée a little better. They have their first date, he buys her a 300-million-yen engagement ring that has a fancy trick to it, they have a ride in a carriage under the starry night sky, yadda yadda yadda.

— The point here is that Wendelin is sooooooo different, you guys. He’s not like the rest of these vile schemers! He’s interested in people for who they are! He doesn’t see Elise as Saint Whatever! Rather, he sees her as the endearing 12-year-old girl that he wants to learn all about!