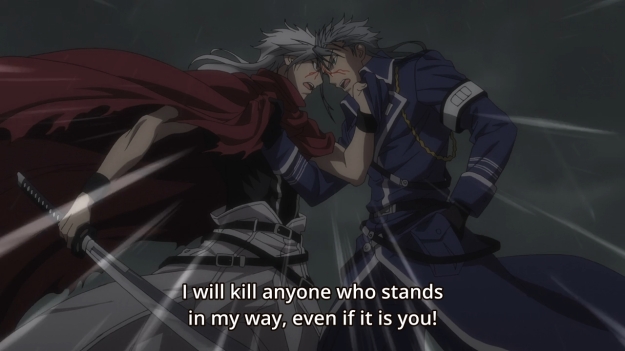 You can’t stop these shounen boys from trying to do everything on their own. They’re just so stupid.

— Licht not only reveals that Tsukina, Hina’s mother, was his childhood friend, she was also engaged to Tokikaze. Y’know, Licht’s BFF? The guy he tried to save by joining the military? The guy he supposedly killed with his bare hands? This is why, Licht explains, he can’t accept Hina’s love. He killed her father, so he should be her enemy… wait a minute, hol’ up. If Tokikaze truly is Hina’s father, then when the fuck was she conceived? Licht killed Tokikaze 300 years ago, and Hina, as far as I know, isn’t 300 years old. Doesn’t Licht find this strange? Doesn’t he find it odd that his best friend’s daughter is somehow alive 300 years after he killed the guy? This must mean that Tokikaze is still alive… and yet, this thought never crosses Licht’s mind. Ugh.

— I also wonder how Tsukina ended up in Alcia, but of course, that doesn’t get explained.

— So Licht recognized Hina from the very beginning of the story. Good lord, imagining trying to perv on your best friend’s daughter.

— We suddenly cut to Schmelman, who isn’t concerned at all about the Original Ballot in Hina’s possession. Apparently, it was stolen only five mere years ago. How did it end up in Tsukina’s possession? Shrug. In any case, Mr. Bad Guy is confident that Licht will eventually come to them. Well, if our idiot hero dreams of doing everything himself, then I suppose Schmelman isn’t wrong.

— Pele confesses his feelings to Lynn again, but she’s all passed out from the alcohol. He soon starts to succumb to the wine’s effects. It turns out Licht had spiked it. This way, he can ditch his buddies to go fight the Alcian Kingdom all on his own. When protagonists pull this sort of thing, I always assume that they have a death wish. ‘Cause honestly, does he really think he’ll win all by his lonesome? Eh, maybe he does, but he has to know that he’ll go going up against Schmelman eventually. And since he borrows his powers from Schmelman, it’s not gonna be a walk in the park. That’s not even mentioning all of the other super strong fighters on Schmelman’s side. After all, this is a braid-dead shounen anime. Strong fighters are a dime a dozen.

— Naturally, the only person to not pass out from the spiked wine is Jail… ‘cuz muh conviction. Pfft. Like I’ve said before, Jail’s conviction is the dumbest thing about him. But we’ll get to that in a sec…

— …’cause important things are happening in the capital. Military bigwigs are being assassinated left and right. Alexandrov fears that the king could be next. Am I supposed to feel bad about the king, though? Doesn’t his kingdom only exist by draining Earth of its resources and thus depriving billions of people a right to life?

— I like how it looks like these people are trying to repair a gaping hole in the ground with nothing more than lumber and maybe some bags of dirt.

— Basically, Alcia can’t exist in perpetuity. You actually need to make renew your wish with the Original Ballots. Since Tsukina stole one — if it was even her who did it — they can’t do that. And if they don’t retrieve the missing Ballot, Alcia will eventually return to the Abyss… which is really just Earth. That doesn’t sound to bad to me, but of course, the haves rarely want to relinquish their possessions to the have-nots.

— There are fractures within the military. One guy wants to fight Schmelman’s SSU head on, which sounds foolhardy. The others want to preserve their strength in case they need to fight the denizens of the Abyss. Something confuses me, though. Did Alcia form a military just in case they would have to go to war with the Abyss one day? ‘Cause it’s not like they have any enemies up here. What exactly would a solitary kingdom with no natural enemies need an army for?

— Alright, back to Licht and Jail. The latter insists that he will do everything he can to stop Licht, because it’s his duty to protect the kingdom. He adds that Licht is evil. This is what I mean by his pathetic conviction. Jail isn’t blind. He saw what happened 300 years ago. He knows how and why Alcia exists. He only has the privilege to protect this kingdom precisely because it is dooming the masses to a horrible, deprived existence. So how can he preach on and on about good and evil when he is basically aiding the generic evil kingdom straight out of some kid’s fantasy book?

— The conversation, however, changes topic pretty quickly, because Jail starts to rail on Licht’s self-sacrificing nature. Eh, both guys have a point here. Jail is right in that Licht isn’t actually sparing his friends from hurt. On the other hand, Licht honestly believes that his actions will lead to the lesser of two evils. Yeah, he’ll still hurt his friends, but it’s better than them becoming murderers. It seems, then, that we are at an impasse.

— I guess the only thing I would add is that people have the right to make their own decision. If his friends want to join him in battle, then so be it. They’re not children. They don’t need to be coddled and thus robbed of their autonomy.

— In the end, Licht and Jail don’t fight, because there’s a better time and place for that. If Jail insists on sticking by his conviction, then he’ll meet on the battlefield soon enough.

— As Schmelman correctly predicted, our hero is going right for them. As a result, he knows the perfect person to intercept Licht…

— In the morning, the rest of the gang wake up in a panic. They decide to pursue Licht at all costs, but uh… they’re trying to catch up to him on horseback. Well, it might work since Licht kinda has his hands tied at the moment.

— Yep, our hero quickly finds himself pinned down, because Doan is the perfect counter to him… in theory. I’m sure Licht will find a way to win somehow. Or maybe his friends will even show up and save him. It’d be nice if Sonohara gets to have her revenge on Doan, but who knows? Girls rarely get to shine in shounen anime. That’s my biggest gripe with My Hero Academia.