After just one meeting with Akito, Kyo seems to have accepted his lot in life.

— When Tohru hears that Akito has summoned Kyo, she is excited for him. She’s so optimistic that she can’t even imagine that the Sohmas have been taking nothing but Akito’s abuse for the past few days. Kyo is just the next victim in line. Hm, I guess you can’t really fault someone for always trying to see the silver lining in every situation, but this is an example of how unchecked optimism can actually hurt someone. Kyo isn’t affected, but I can imagine someone else in his shoes feeling as though Tohru doesn’t really understand their feelings. ‘Cause who knows, maybe Kyo is actually doing a good job at hiding his emotions, but from my perspective, he clearly isn’t happy to be summoned. If anything, he’s confused and perhaps even a bit disturbed. Tohru doesn’t see that, though. So again, either we are allowed to see what she can’t see, or she’s not as perceptive as she could be.

— No child — and yes, Kyo is still a child especially to someone as old as me — should look like this, but Shigure marches him to Akito’s room anyways. After all, this is what he wants. He wants something to happen between these characters. It’s just rather sad that a grown man is using children as his pawns.

— Once again, Yuki warns Kyo not to cause any trouble. And after Kyo is no longer within hearing range, the rat goes, “He needs to know his place. Him and me both.” Does he have any ounce of sympathy for the cat? Any guilt over the fact that one of his own family members will be locked up for the rest of his life? I can’t really tell. To be fair, Kyo wants the rat to be locked up instead, so I guess everyone needs to look past themselves. Unfortunately, they can do it for Tohru, but not each other.

— You kinda wanna facepalm when you listen to this girl speak.

— Kyo’s meeting with Akito goes about as well as you might expect. The latter insists that Kyo can never beat Yuki, which the former probably knows. Obviously, he shouldn’t even be trying to beat Yuki. He should try to find a solution that doesn’t involve imprisoning anybody, but I can’t really expect much from a hot-headed teen with a long history of being emotionally abused and isolated from his own family.

— Akito then insists over and over that Kyo is responsible for his mother’s death, which then dredges up painful memories of his own father saying the same thing. Shitty parent check! 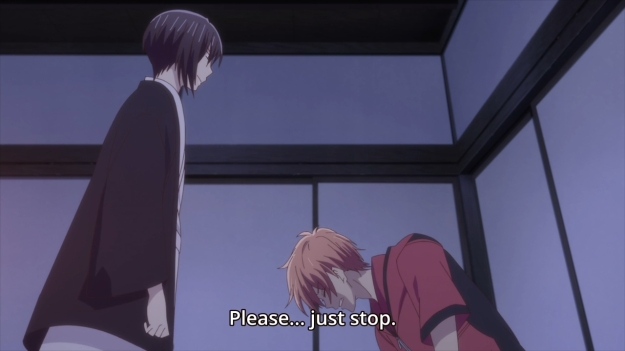 — When Kyo is finally emotionally broken and on his knees, Akito wears a smile on her face. She delights in his suffering. I’m sure by the end of this series, she will have seen the wrongs in her ways and thus change for the better. And as a result, the rest of the Sohmas will eventually forgive her when they are ready. After all, it is said that forgiveness is a good thing. Eh. I don’t agree. If it were me, the amount of pain that Akito has inflicted on everyone can never be forgiven. That doesn’t mean, however, that you should hold onto hate in your heart. That doesn’t mean that you should try and seek retribution. But it’s not an either/or situation. Just because you stop hating someone doesn’t mean you have to forgive them. You simply move on. Maybe that’s the disconnect. I feel as though you can be at peace what someone has done to you without actually forgiving them. Others might disagree, and that’s fine.

— Even Akito admits that Tohru is like a saintly mother. She, however, screws up when she starts insisting that Tohru must be a monster because she’s too perfect. Well, no, Tohru isn’t perfect. But more importantly, isn’t that notion ridiculous? You’re a monster for loving and accepting everyone? So of course, this gives Kyo at least some strength to get back on his feet. Akito had him dead to rights. He was on his knees and sobbing. You can attack his guilt all you want, and you’ll eventually break him. But by dragging Tohru into this, Akito inadvertently gives Kyo the nudge he needs to make some sort of stand against all this abuse. Of course, I’m not on Akito’s side. I’m just amused that she got a bit too arrogant and tried to go for too much.

— Knowing that Akito is wrong about Tohru — and knowing that he has to protect Tohru after everything she’s done for him — Kyo finally comes to the realization that he’s in love with her.

— But in the middle of arguing with Akito, Kyo recalls yet another rather painful memory. Apparently, he feels responsible for Tohru’s mother’s death. I mean, that’s pretty much what I can infer from what little information I’ve been given. I doubt he actually caused her to die, so he probably thinks that he could’ve saved her somehow but he didn’t for whatever reason. And just to twist the knife even further, he also believes that Tohru’s mother had used her last words to tell him that she would never forgive him. I doubt someone who raised a kid like Tohru could ever find it within herself to spite a little kid like that, but meh, traumas make you believe wacky things.

— And because Kyo now realizes that he’s in love with Tohru, he mistakenly believes that there’s only one thing he can do: if he wants to protect her, then he needs to accept his place. After all, he’s operating from the false premise that he killed her mother. As a result, he doesn’t deserve her. Unfortunate, isn’t it?

— So in the end, Kyo gives up and lies; he tells Akito that not only does he hate Tohru, he could never fall in love. I doubt Akito believes that, but she still got what she wanted: destroying Kyo’s spirit.

— Classic abuser move: they always claim that no one else can love you as much as they do.

— YO LADY TURN OFF THE DAMN FAUCET

— Yuki also doesn’t believe that Kyo can hate Tohru, but honestly, who can? Honestly, not even Akito. She hates her idea of Tohru. She thinks Tohru is out here trying to steal the Sohmas away from her. But she can’t hate Tohru when she doesn’t even know the girl.

— When Kyo finally gets to go back to the main vacation house, he finds himself looking for Tohru. After suffering Akito’s abuse, he yearns for her unconditional love and acceptance. When he was younger, he thought he had truly given up on love. He thought there would be no way out of his despair, but his master told him otherwise. Kazuma reassures the kid that hope can never be extinguished. After meeting Tohru, Kyo finally understands what his master had tried to tell him… kinda.

— Akito’s room is cold and closed off. Meanwhile, Tohru is out in the open, bathed by the warmth of the sunset. Not a particularly deep contrast, but I felt it was worth pointing out.

— Y’see, Kyo now understands that there’s someone out there who can love and accept him. That hope is still alive. Unfortunately, he has no hope in actually being with her. Again, he thinks he killed her mother, so as far as he’s concerned, that ship has sailed. So he resigns himself to the fact that he and Tohru now have an expiration date. From now until he is “inevitably” imprisoned, he hopes that she will stick by his side. Hm. I don’t really get it, I suppose. Even if he gives up on the idea of being with Tohru, that doesn’t mean he has to imprison himself. But I guess the Sohmas all believe that someone has to be the scapegoat. And if he can’t have his lover by his side, I guess he might as well be the scapegoat.

— It kinda sucks that Kyo is making this decision on his own. After all, even if he truly is guilty for her mother’s death, Tohru would likely forgive him anyways. But he’s probably too scared that she might hate him, so he’ll take that secret to the grave. I personally think that’s stupid.

— It’s funny, isn’t it? This vacation seems to have strengthened Yuki’s resolve. He’s the one who confesses to Tohru (even though it was a weak, pathetic one), and he’s the one who will now try to fight for her. On the other hand, Kyo will probably now try and prevent Tohru from getting too close to him. Man, wouldn’t it be ironic if she ends up coming to terms with her feelings for Kyo because he’s pushing her away?