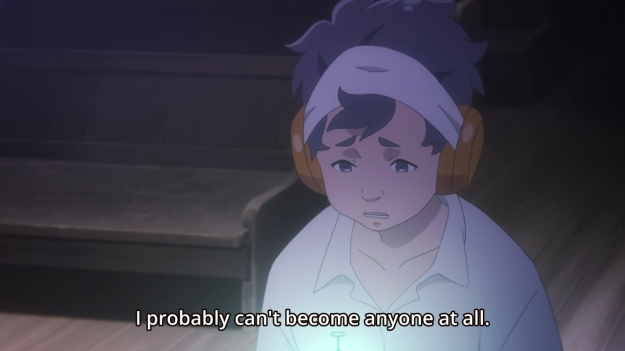 Every hero eventually has to decide if they want to keep on fighting.

— When Echo “wakes up,” he is greeted by a girl who looks a whole lot like Little Bo Peep. Well, her name is Janis, and she immediately takes the boy in and cares for him. She even strips him down to his boxers… or maybe her grandpa did. Shrug.

— On the surface, Echo seems to have given up on… well, everything. He decides to stick around and help out with the farm. This involves harvesting vegetables, tending to the farm animals, so on and so forth. And every night, he gets a humble meal. A simple life in an idyllic setting is nice and all, but I still find it odd that Echo would choose this out of all the possibilities in front of him. Alright, he doesn’t think he can help Mu anymore. He also might have assumed that she has rejected him (even though she’s not really herself in current state). But even if those two points are true, why would Echo stay here? Why wouldn’t he at least go home and be with his sister? Maybe he doesn’t want to come home as a failure?

— At one point in the episode, he discovers a basement full of vinyl records. Unfortunately, he has never seen vinyl records before, so he mistakes them for… books? How on earth do these resemble books?

— Janis, however, refers to the records as memories. Alright. Well, if we have records, we must have a record player.

— Eventually, the seasons change. That implies that Echo has been living here for a really long time… assuming that this place is even real. After all, the last time I checked, Chicago and Liverpool aren’t on the same continent. Plus, I doubt this story takes place so far in the future that England and the US have somehow drifted near each other.

— If you look closely, you can see Janis’s name on the gravestone. Not only that, she’s Jimi’s actual sister. Kind of a big giveaway, but I guess the story thinks we should’ve suspected that something was off by now.

— Eventually, Janis decides to test Echo. Now that he’s spent so much “time” here, would he like to stay forever? And if he does, would he prove it by handing over Mu’s very important item? In the end, Echo can’t give it up. This is a common and perhaps even important step in every hero’s journey. They will eventually fail, and in doing so, they will begin to entertain other alternatives… “what-if” scenarios. What if I give up on being the hero? What if I just settle down and be ordinary? Echo has tried it, and he doesn’t hate it… but a small part of his heart still yearns for something else — adventures, Mu, music, love, passion, all of it really.

— If it wasn’t clear by now that Echo isn’t in the real world, Janis takes him to The Crossroads. Ooh, how surreal.

— We eventually come to a building which houses a record player, but to the characters, it is the Origin. Alright then.

— Since we’ve got the Origin, why not have an origin story! As a result, Janis’s grandpa is conveniently here to tell us a thing or two about the Earless. Even now, however, we don’t really know where they come from. The old man simply says that they appeared out of the blue. At first, there was no fighting between humans and the Earless. Humans were simply curious, but it sounds like that curiosity gave way to fear, which then gave way to aggression. All-out war inevitably broke out.

— Back then, Jimi was just an ordinary boy who set out on a journey with a simple dream. He eventually comes to realize that the Earless aren’t truly Earless. That’s just the name that humans gave them. All this time, however, they’ve heard everything that humans were saying about them. In other words, the Earless are really the Listeners. Welp, that means humans are ironically the ones who can’t hear.

— We still don’t know everything though. We know how Mu came to be, but why did she end up in a trash dump? Shrug.

— So according to the old man, humans prayed to be able to convey what was in their hearts to the Earless. This was how Equipment came into existence. I still can’t help but wonder why this is possible, but I guess some things should just remain a mystery. Maybe there’s a god out there looking out for everyone.

— Also, if Equipment were originally meant to convey humanity’s heart, why did Players use them to fight the Earless? Dunno. Maybe aggression is just our natural inclination. There are certainly those who want to spread a message of love and peace, but they are definitely in the minority.

— After seeing all of this, Echo’s desire to see Mu again is reignited. After all, he never got the chance to tell her about his feelings. He wanted to do so after the play, but that was already too late. Well, he can try and convey his heart now. As a result, this fervent wish gives way to him becoming a Player.

— Mu went from Earless to Player. Does that imply that she had a message that she wanted to convey as well? She must have forgotten it along with all her other memories.

— Now that Echo has his mission, he doesn’t need to place anymore. As a result, it starts to disintegrate like an old memory along with its inhabitants. Right before Janis disappears, she gives the kid a little encouragement. Everyone starts out ordinary. Heroes aren’t made in a day.

— Echo wakes up again to find himself in a dump, so it looks like he didn’t really waste too much time in the dream world. Nevertheless, the farm is definitely long gone.

— Elsewhere, the Second Coming is about to start, but Mu isn’t going to obey Tommy’s orders. Instead, she has reawaken as the King of the Earless, and proceeds to turn everything near her into the Earless. She, however, just straight up absorbs Tommy into her body. Wonder if that means he’s dead for good. Oh well, he’s a murderer anyway.

— Did Jimi sacrifice himself to give Mu a chance to see and live among humans? And when humans tried to take advantage of her, does she just now want to wipe out humanity (or, at least, turn us into Listeners like her kind)? That’s my best guess for now.

— In any case, Mu conveniently announces that she’ll take a break for now. That’s nice. Gives Echo time to prepare himself. Maybe even gather all the warriors that he has met on this journey. After all, we still don’t know how Nir is doing ever since Mu launched her out of the tower in last week’s episode.