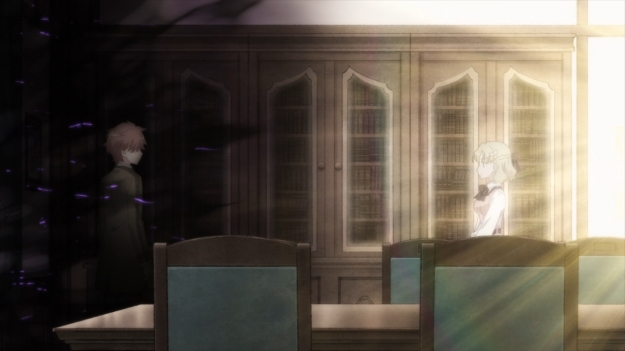 Well, there always has to be a villain.

— The mean girls try to accuse Catarina of bullying Maria, which is patently untrue. Nevertheless, our heroine believes that she has somehow triggered her doom flag. She actually thinks there’s a chance that Maria might agree with her accusers. It never once occurs to her that her friends would come to her defense, which is exactly what they do. Obviously, it has been well established that she isn’t very bright.

— In fact, they defend her by calling her stupid.

— Even her best friend from her previous life agrees. Ah, who needs enemies when you’ve got friends like hers? Chin up, Catarina!

— Even though this is just a recurring gag in the series, I feel kinda ambivalent about it.

“Instead of a guy being isekai’d, it’s gonna be a girl instead!”

“Ah, okay. A small twist, but a welcome one nonetheless.”

“Her harem won’t just consist of dudes! All of the girls will fall in love with her as well!”

“Oh nice, love for everyone.”

“And finally, I’m gonna make her the dumbest character to ever live!”

— When Maria threatens to turn the tables on the mean girls, they quickly run away with their tails between their legs, but Maria quickly notices that they’ve been tainted by the dark! Welp, it looks like we’re about to confront the show’s primary villain. Gotta to end on a high note, after all.

— During lunch, all of Catarina’s friends feel as though there’s something fishy going on. They get the sense that someone is pulling the strings behind the scenes. Unfortunately, our heroine couldn’t possibly be more carefree right now. Ah, to be so blissfully dumb.

— Afterwards, Maria decides to do a little investigation on her own, which is of course foolish. Oh geez, I’m the only person who can recognize that there’s a dark, malevolent force stalking my dearest friend. I better put myself in direct danger without my friends there to help me! Ah well, how else is this show going to manufacture drama, right?

— So to nobody’s surprise, Maria has gone missing. In fact, she’s been gone for three whole days. Ooh, the plot’s finally getting juicy! Well… not exactly. What follows is dry, boring exposition.

— Geordo shows up one night to tell Catarina all about dark magic. It can manipulate people’s hearts, amplify their negative emotions, it can only be acquired by sacrificing a person’s life, only those who wield light magic can detect dark magic, blah blah blah. Yeah, very interesting.

— Later that night, Catarina has a nightmare in which all of her friends are dead. Naturally, she’d trade her life for her friends’ any day of the week.

— Geordo had told her not to stray too far from her friends. She should never be alone. So what does she do the next day? 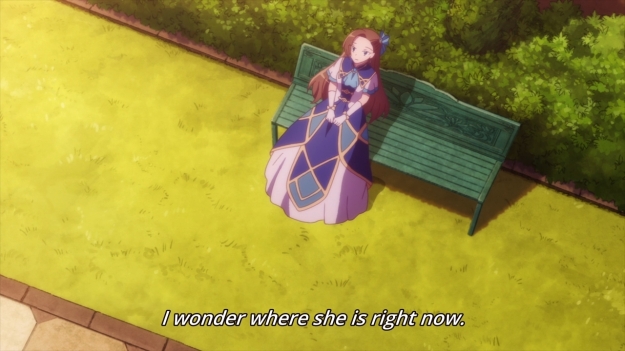 — This is when Sirius suspiciously walks up to her. Ah, of course. The one recurring character who isn’t in her harem has to be the bad guy.

— All of a sudden, Catarina remembers something her former BFF had told her. There’s apparently a hidden route in which you get to conquer the bad boy! Wait, I thought Geordo was already the bad boy. Well, Sirius is the badder boy! Unfortunately, her former BFF wanted to tell her more about this secret route, but our heroine didn’t want to hear spoilers. Whoops. Man, if only her former BFF had somehow reincarnated as one of her friends…

— Welp, even Catarina agrees with her friends.

— Catarina idiotically asks Sirius straight out if he has dark magic, but it’s okay. After all, he just comes right out and tells her that he’s the bad guy. Welp, at least we’ve dropped the pretense.

— Sirius then declares that he hates Catarina. He even goes so far as to call her a hypocrite, but he doesn’t elaborate. Hm. I’m trying to imagine what he means, but I can’t really tell. Is he spiting her for not reaching out to him when he’s been so lonely? Or does he know that she’s only trying to avoid her doom flags?

— Also, it feels like Sirius’s hate isn’t really plain, ol’ hate. It feels like love that his been twisted into hate if you get my drift. Sirius even sheds a tear as his dark magic envelops Catarina. As a result, I feel like he’s going to end up in her harem if he somehow survives this arc. After all, despite what he’s done to Maria — and despite the threat that he represents to all of her friends — Catarina still pities him. She doesn’t manage to touch his heart, but that’s only because this isn’t the final episode. So y’know, we’ll see.