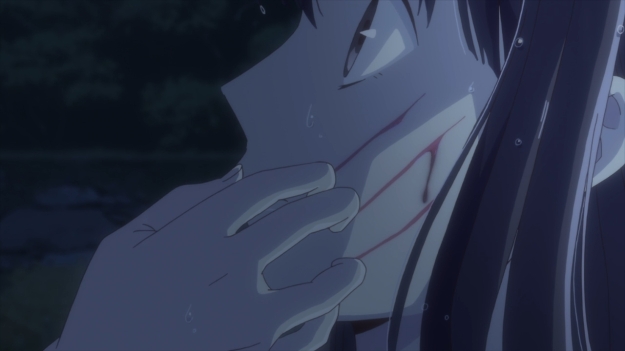 Tohru finally gets to have a talk with Akito, and it goes about as well as you’d expect.

— No anime can ever celebrate summer without the obligatory fireworks scene, so here’s one huge pile of them.

— It feels as though anything and everything can make Tohru cry. Even the simple joy of lighting fireworks with her friends sets her off.

— I couldn’t help but laugh at the dumb look on Yuki’s face. Yup, he sure has changed.

— When Tohru goes to fetch Kyo and Momiji, she inadvertently eavesdrops on their conversation. Tch, that’s not very polite! Jokes aside, both boys admit that they’re both being selfish. Essentially, they’re trying to make as many happy memories with Tohru as they can before… y’know, Akito ruins everything. Is this really selfishness? Eh, I guess…? Some people might not want to spend time with you if they know there’s an expiration date on the relationship. That doesn’t sound like Tohru, though. Nevermind the fact that she’s definitely going to try and break the curse, because even if she couldn’t, she’d still try to spend as much time as she could with the Sohmas.

— Elsewhere, Akito lashes out at Shigure for his lack of kindness. I guess when he’s with her he’s the only person who is neither 1) an emotionless robot or 2) completely trembling with fear. He treats her like a normal person, and this lack of reverence comes across as unkindness.

— Kureno interrupts them to deliver some bad news. Akito will have to cut the vacation short, so she decides that she needs to see Tohru before she leaves. Naturally, none of the grown-ass men around her decide to do anything about this.

— Momiji tells Akito that Tohru’s probably asleep. When Akito wants to come into the house anyway, he actually stands his ground. Unfortunately, this merely earns him a right hook to the face. Hell, it even draws blood. Yo, that’s child abuse… not that anyone’s gonna do anything about this, though. After all, the Zodiacs are under her spell somehow. Simply standing in her way probably took a lot of courage for the rabbit. Sigh.

— So of course, it’s up to Tohru to step in and protect Momiji. The problem, however, is that who will protect Tohru? Here’s what I don’t get: she’s their god, but she certainly ain’t Tohru’s god. Nevertheless, the girl is frozen stiff as Akito literally grabs her face and yanks it closer. If someone I barely know even thinks of coming close to my face, I’d instantly recoil. But Tohru doesn’t do anything! Does Akito’s influence extend to regular humans as well?! Or is Tohru really that scared? 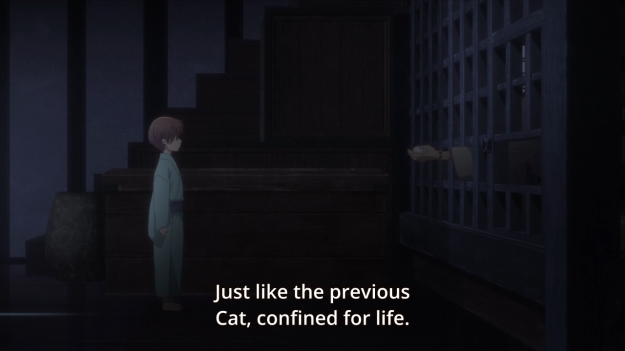 — On the plus side — if you can really consider this to be a positive — Akito gives Tohru the info that none of the other Sohmas would volunteer. Our heroine now knows that the Zodiacs will eventually go and live with Akito. Not only that, Kyo will be imprisoned as the scapegoat that they want him to be. Now that Tohru has this information, she can obviously try and do something about it.

— When Tohru argues that the Zodiacs can’t be happy about this, Akito actually claws Tohru’s left cheek. First, wow, those are some sharp nails. Second, how can the girl just stand there and take it? What is wrong with you? How can you be so passive? There is neither fight nor flight. At the very least, press charges! I sure as hell would. Akito can beat up a kid, but what is she gonna do against a cop?

— Again, Akito isn’t Tohru’s god. In fact, if the former counts as a god, it’s a really pathetic one. Oooh, wow, you can only abuse your family and nothing more. Look at big boy Zeus over here! The fact that Akito is this insecure over a normal girl — a girl who can’t even stand up for herself while she’s being battered — obviously shows that she’s only weak, her grip on the Zodiacs are also weakening.

— As soon as Akito leaves, Tohru slumps to her knees as if all energy has been drained from her. Only then do the adults finally show up. Good job, guys. Way to protect your dear friend who has never done anything wrong. Pathetic. Shigure was there when Akito left; he has no excuses. Hell, maybe he even wanted this encounter to occur.

— And in the house, we see Hatsuharu holding Kyo back, but of course, if he really wanted to get involved, no one could’ve stopped him. They must truly believe that interfering would’ve done more harm to Akito, huh? But that belief in itself is also pathetic. Dad is hurting mom, but I’ll just make it worse! Let’s just stand around and talk about how it is difficult to protect the ones you love! Mm-hmm, that’s it!

— The next day, the incident has already been swept under the rug. Like an abused spouse, Tohru lies about her injury. The kids then proceed to light fireworks as if they couldn’t be happier. Of course, Tohru has her mind on more than just fireworks; she wants to break the curse. But that’s it. Two people were abused by Akito, and a tiny seed of rebellion in Tohru’s heart is all that we get.