Right off the bat, our protagonist Kazuya gets dumped by Mami, his girlfriend of one whole month. Seriously, they dated for a month. Who falls into such deep despair over a relationship that short? Hell, he should take solace in the fact that her dumping him might have led to the discovery of a cuckhold fetish. That ain’t my thing, but hey, no kink-shaming here. In any case, his vulnerability eventually leads him to spend his dad’s hard-earned money on Chizuru, a rent-a-girlfriend, and right off the bat, he’s like one of those sad sack losers who fall in love with strippers. Yeah, Chizuru is nice to him, but that’s because it’s her job. And when he finally realizes that it’s all an act — an act that he specifically requested and paid for — he suddenly turns nasty. Essentially, Kazuya is too gutless to confront Mami, so he selfishly decides to take his anger out on Chizuru instead. He’s initially even proud of himself. Pathetic, huh? But it’s par for the course with this guy. After all, he’s pretty shallow. He thinks dating Chizuru would be a dream, but he knows nothing about her. He’s just fixated on her physical appearance.

This is where Kazuya and Chizuru’s “relationship” would end if we weren’t in a “zany” romcom. When a customer flips out on you, you probably shouldn’t spend another second with them. Who knows how dangerous they might get! There are creeps everywhere. But when Kazuya has to rush to the hospital because his grandmother fainted, Chizuru strangely decides to tag along. Sure, they still have some time left on the clock, but I’d argue that she’s off the hook if the customer has an emergency and bails on their own volition. What compels her to follow him to the hospital, especially when she knows that her own grandmother is also interned at the same place? Unfortunately, when faced with his parents’ negativity — and to be fair, they’re not exactly wrong — Kazuya can’t help but lie and claim that he’s dating Chizuru. He’d never have this opportunity if she had not come with him. But hey, we wouldn’t have a show if she weren’t in the picture, so the girl then does her job by playing along perfectly. Before you know it, the two of them just keep digging themselves a deeper and deeper hole. Maybe Chizuru’s just that professional. If there’s time left on the clock, then by god, we’re going to keep this farce going until the fat lady sings.

As luck would have it, these two go to the same college (I much prefer her normal, everyday look) and even live in the same apartment complex. In fact, they’re next-door neighbors. Wow, so many coincidences! Obviously, we know how this’ll play out. Kazuya and Chizuru will have to keep this charade up, because nobody wants to disappoint their precious gran-grans. And despite his dreadful start in this opening episode, we’ll eventually learn that Kazuya is probably “not that bad” of a guy. Chizuru will come to realize his good qualities over the course of the series, and maybe she’ll even fall in love with him one day. Maybe. But because this is anime, we might as well make it a harem anime, so there’ll be other girls to distract us along the way. Hell, Mami even comes back in next week’s episode. Since (I believe) this is a one-cour anime, no one will be hooking by the time the show is over, though. Will I nevertheless stick with this show for the rest of the season? Eh, it’s pretty slim pickings this summer. But enough about that. I wanna talk more about the premise instead. 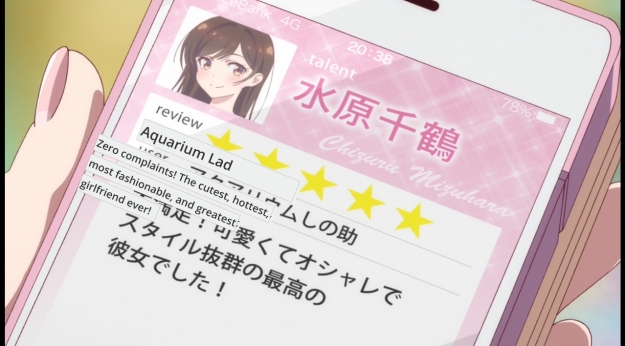 The whole “rent an actor” thing is very real, and I dare say even morally problematic. From fancy sports cars to Louis Vuitton bags, we’ve always paid a premium to project a certain appearance. Treating people as purchasable accessories is just the natural progression of our eternal quest to commodify everything in our everyday life. I once read an interesting interview with a man in this very same industry. In one of his roles, he pretends to be a girl’s father at her mother’s behest:

Morin: How do you handle it when the daughter gets angry or sad?

Yuichi: I never yell, no matter what. That was in the order-form description. The girl was bullied also, if you remember, so her feelings can be very unsettling. There was also a rebellious time, in her teens. She was having difficulties with her mother. When she’s with me, though, she always asks, “Why do you have to leave now?” It’s unpleasant, but it is a reasonable emotion.

Morin: Is it possible to avoid the truth forever?

Yuichi: The truth does have to come out eventually. The happiness is not endless, but that doesn’t mean that it’s without value. The child had a father when she needed him most. It might have been a brief period, and she might know the truth now, but she had a meaningful experience at that time.

My initial gut reaction is, of course, horror. Thanks to her mother, this poor child is living a lie. But that’s me projecting my own feelings on a girl whom I will never ever meet. Disgust is how I would feel if I was in her position, but I have no idea how she will react when she eventually learns the truth one day. Maybe she will be as open-minded as he hopes her to be. Maybe she’ll look back on their “father-daughter” moments fondly. I just feel sad, however, that the girl never even had a choice in the matter. If Kazuya wants to fill the empty void in his heart by hiring a rent-a-girlfriend, well, that’s certainly his prerogative. It’s his money (not really), and as an adult, he gets to make his own decisions in life. But a little girl doesn’t get a say when a random man suddenly shows up one day and calls himself her father.

3 thoughts on “Kanojo, Okarishimasu Ep. 1: Buying the appearance of love”