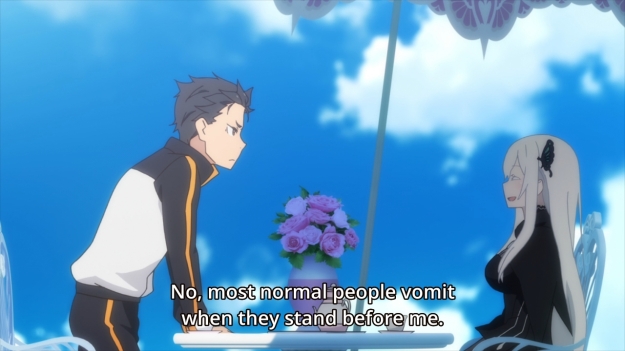 First things first, I guess I appreciate the fact that Subaru didn’t stick around for a conversation with Echidna. I felt as though the scene was dragging on long enough, and I didn’t particularly want an info dump. You know it would’ve been one too, because she’s apparently the Witch of Greed because she has an insatiable thirst for knowledge. Still, I gotta question him gulping down his cup without any hesitation. Even if it doesn’t kill him, you never know if it might be laced with something unpleasant (though I suppose there are lots of people into that sort of thing). But whatever, Subaru’s got plot armor so it won’t matter in the long run.

Once our hero’s back with Emilia, there’s a minor scuffle with Garfiel (only dragons were hurt in the filming of this episode). Our heroes then proceed deeper into Sanctuary and finally meet up with the seemingly heavily-injured Roswaal. They quickly learn that halfies (and the villagers) are magically trapped within Sanctuary, and the only way out is to complete a series of trials. Well, that’s convenient. It also makes me wonder how Frederica got out. Maybe she was purposefully let go in order to lure our heroes here. But at this point, I’m just speculating, and that’s not too useful. Anyways, even though I’m not a huge fan of exposition, I’m kinda surprised that both Subaru and Emilia didn’t grill Roswaal on the details. I mean, we’re just trapped? Why? What for? And what are the trials like? What do they involve? What are they testing? Physical? Mental? Emotional? I mean, information is power, so don’t you wanna know as much as you can before going forward? Bah, I suppose Roswaal wouldn’t reveal much; he seems like he’s up to something nefarious.

Before undergoing the trials, Emilia has an emotional talk with the trapped villagers. They treated her terribly, but she’s still going to let bygones by bygones and help them out. I suppose that’s commendable, but they were gonna be freed anyways, right? If she wants to leave, she’ll have to take the trials. And if she succeeds, then the barrier is lifted so it’s not like she’s going out of her way to help them. Maybe I’m misunderstanding something. Ah well, even if I’m not, I suppose I’m just nitpicking.

Naturally, Emilia isn’t the only one who will get to have some fun. Subaru is the main character, so for some reason, he also gets to take the trials as well. Still, I had to laugh when he ran in just to find Emilia unconscious again. Unfortunately, he can’t help her right away, because part of his trials involves going back to his world…? Or at the very least, some illusion of it. 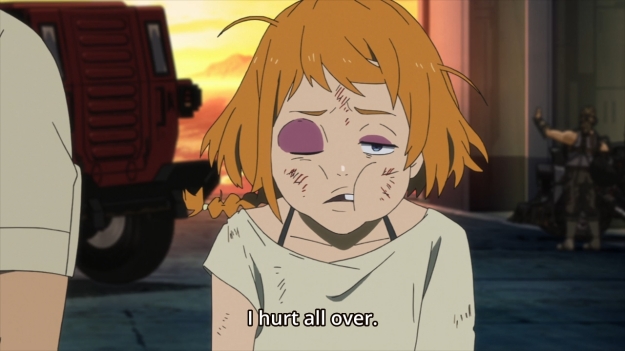 — At the start of the episode, Kaburagi watches a video recording of when Natsume was supposed to have died. Her chip malfunctioned, but the paramedics were able to revive her. And that somehow makes her a bug? Wouldn’t the malfunctioning chip itself be the bug? Still, I’m surprised that a recording of this event even exists. Are there cameras everywhere?

— Kaburagi has Natsume start off by fighting one of the weaker Gadolls in a tutorial zone. I want to say weakest, but I mean… Pipe exists. Naturally, combat here as video gamey as it needs to be; after all, this is entertainment for Gears. When you attack a Gadoll, it creates a field in which gravity is unstable. This is why fighters can float and glide around like they’re in a video game. Not only that, you gotta kill Gadolls in order to harvest their precious oxyone. What I’m curious about is whether or not this game has a purpose beyond mere entertainment. The corporation always ends every message with “Have a profitable day.” How does one make a profit here, though? By playing the game? But judging by the “gameplay,” it almost seems like the Gadolls were purposefully created to be hunted. If that’s the case, we’re recycling resources rather than harvesting them.

— The show’s story structure is pretty basic, so we naturally proceed to a montage. When Fei hears that Natsume has started training to fight Gadolls, the girl tries to persuade her best friend to stop. Obviously, it’s dangerous out there, and Natsume’s prosthetic arm isn’t suitable for combat. As a result, some doubt starts to creep in, and Natsume briefly considers throwing in the towel at one point. But after a bit of pep talk, it’s yet another training montage. Kinda boring, really.

— Meanwhile, the corporation is starting to get on Kaburagi’s case. Apparently, he’s been so busy training Natsume that he has started to neglect his original duties of seeking out bugs. Or maybe he just wants to stop doing it altogether. If Kaburagi intends to use Natsume in order to challenge the System, I don’t think it’s very smart for him to shirk his duties. He knows he’s being closely watched. If his activities deviate at all, he’s bound to raise suspicions… and this will likely happen in a future episode.

— When I think of bugs and computers, I think of something that only exist due to, well, mistakes by the programmer. Perhaps Natsume does represent a sort of security vulnerability to the system. In that case, she’s more akin to a virus or some other type of malware. In our world, computer viruses still have to be created, but who knows? Maybe in the world of Deca-Dence, computer viruses can somehow spontaneously arise and “mutate.” Still, I don’t see Natsume as a bug… as far as software bugs are concerned.

— We get more exposition in the form of a documentary. Blah blah blah, humans screwed themselves, and and eventually, the machines took over. The all-seeing-System now rules over everyone. Order is paramount… and yet cyborgs are allowed to have their own personalities, and thus some semblance of “free will” that the System can’t control. As a result, someone like Kaburagi can “rebel” and mount some sort of resistance. Shrug.

— Also, Pipe is apparently also a bug. If Gadolls were created by the machines for the purpose of this game, I suppose he might very be one. He might be a mistake in the creation process that they didn’t account for.

— Natsume can only go so far with her prosthetic arm, so Kaburagi upgrades it for her out of his own pocket. As a result, she now has five fingers on her right hand. It can also turn into a weapon. He shoulda just done this from the start.

— Before they can test out her new arm, however, the Gadolls attack. Now, are these spontaneous or scripted events? And what do Gears do when there isn’t an event happening? Do they just go out to a dangerous zone by themselves and mindlessly grind?

— Pipe gets lost during the chaos, so Natsume runs off on her own to try and rescue the little Gadoll. We then get a short backstory for the little fella. Basically, Kaburagi bought a home within the Deca-Dence just to keep Pipe as a pet. He can even call in a favor in order to track Pipe down.

— In any case, the episode ends before a big battle can occur.

— Other than the mystery surrounding the System, I’m not too invested in the rest of the story. Natsume isn’t offensive or anything; she certainly has a lot of energy. Nevertheless, I just don’t really have an emotional connection to her character. Right now, she’s not really interesting despite the fact that she’s the main character.